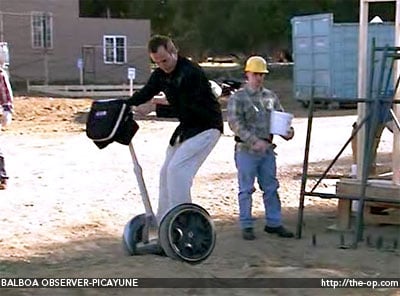 According to several reports, like this one and this one, the Segway is suddenly surging in popularity. In this age of ungodly fuel prices, everyone from law enforcement agencies to universities and even pizza delivery men are turning to the electric Segway. As Popular Mechanics asks, “Could (inventor) Dean Kamen’s transportation revolution be on its way, albeit a few years late?”

I’ll answer that. No. No. No.  I’m reminded of the Arrested Development episode where Gob, the absurd character played by Will Arnett, tries to drive his Segway onto a construction site, only to get hung up on a small mound of dirt.  It brilliantly summed up how inherently silly the technology is (not to mention the people who ride them). The Segway was touted as a revolutionary product when it hit the market in 2001. But what its few supporters failed to notice was that nobody was calling for a revolution against walking. And that’s all the Segway is, a fancy gizmo for people who are too lazy (or unable) to walk or never could figure out the tricky art  of riding a bicycle.

And if the price of gas is really getting you down, the chances are you don’t have $5,000 lying around to buy a Segway. It’s no wonder the Segway’s big customers these days are public agencies, not private companies (who generally know a bad deal when they see one). So let’s forget about the Segway revolution and see this thing for what it is: a terrific prop for comics and jokes.