Gut reaction is a dangerous way to make a law. It has a tendency to catch hapless bystanders in its dragnet 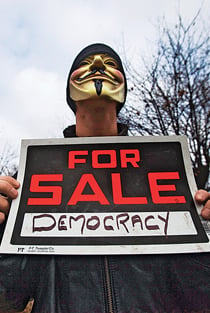 On June 15 last year, just after Vancouver Canucks goaltender Roberto Luongo let in his fourth goal in Game 7 of the Stanley Cup finals against the Boston Bruins, he looked up at the camera through the bars of his goalie mask with a vapid expression on his long and handsome face, one that was about to launch a thousand thugs. When the game ended a few minutes later in a humiliating 4-0 loss to the Bruins, Vancouver hockey fans laid siege to their own city. The streets were a sea of blue and green jerseys and broken glass; storefronts were demolished and police cruisers toppled; at least four people were stabbed, 140 injured, and more than 100 arrested. The vast majority of those responsible for the damage were not masked, kaffiyeh-clad boys spouting anarchist slogans, but drunk sports fans in their hometown sweaters, the names of their fallen hockey heroes printed across their backs in plain sight.

You would think, in light of the now notorious Vancouver riot, that if the federal government was committed to outlawing an item of clothing that was dramatically linked to violent protests, they’d seriously consider banning Canucks jerseys. But the piece of apparel that was implicated with the Conservative majority’s endorsement last week of Bill C-309 was that classic bogeyman of accessories: the mask.

The proposed law would make it a criminal offence to wear a mask during an “unlawful assembly,” punishable by a maximum 10-year prison sentence (which the Conservatives increased from the five-year maximum included in the bill when it was originally introduced in October of 2011). It was a special moment in Canadian history, with a dazzling illogic all its own, especially considering that this year’s mask-heavy Occupy protests were as peaceful as the Vancouver riots weren’t. Unfortunately though, logic of any kind probably didn’t factor very much in the vote. As Andrew Lokan of Paliare Roland Barristers (external counsel to the Canadian Civil Liberties Association) explained, it’s unlikely that Bill C-309—being a private member’s bill—was based on a substantive body of factual research, the kind, for instance, that might link personal anonymity to a violent herd mentality. So what was the mission in the first place? My best guess is the bill was driven by a visceral adverse reaction to cowardice (refusing to put a face to your convictions), by cynicism (the assumption that masked protesters are more likely to smash in a storefront than riled up hockey fans), and basic creepiness (the Richard Nixon mask in the movie Dead Presidents and Freddy Krueger in A Nightmare on Elm Street.) Hence the hatching of a good story—that people wearing Guy Fawkes masks are a dangerous menace to society. If only it were true.

What’s strange is that anti-mask legislation isn’t even new. Section 351 of the Criminal Code already stipulates a 10-year maximum prison sentence for “wearing a mask through the commission of an indictable offense”—apparently a stipulation that Conservative backbencher Blake Richards, the man behind Bill C-309, didn’t think went far enough. According to Huffington Post Canada, one of Richards’s major objections to the current anti-mask legislation is that it can “only be applied after an incident occurs.” In other words, under Section 351, police can only arrest a masked man if he has committed a crime, not because he is wearing a mask in the vicinity of which a crime is being committed.

Bill C-309 would fundamentally change that. Under Richards’s bill, which still must pass third reading and the Senate, you could be wearing a mask in the midst of a violent Black Bloc riot, twiddling your thumbs and minding your own business as the guy next to you takes a crowbar to a cop car, and end up in prison—for 10 years no less—by mere masked association. “The key thing is the intent requirement,” says Lokan, noting that it’s the very thing Richards’s bill has done away with. Richards argues that his legislation is preventative; that it will allow police to arrest violent rioters before they riot violently, or as unlawful events are “unfolding.” This suggests he is extremely fond of the movie Minority Report.

Unfortunately for Richards and the Conservatives, this is the real world, not a science fiction movie. You can’t fight crime before it happens, and when you try, you end up accusing innocent people of serious misdeeds. I am not a fan of the Black Bloc. When I saw photos of them burning and looting Montreal in their masks, I wouldn’t have minded heaving them into a prison cell myself—for 10 years or more. More than once I’ve found myself nodding yes when a right-wing pundit or politician says the recent student protesters in Montreal “don’t know how good they have it.” Nothing is as fundamentally satisfying as the gut reaction to swift justice meted out to yahoos and hooligans. But gut reaction is a dangerous way to make a law. It has a tendency to catch hapless bystanders in its dragnet. Whether they’re the kind of bystanders you’d want to invite to dinner is not the point. The point is that they’re bystanders.

So when someone says—as one angry commenter did recently to an online article about the May Day protest in Quebec—“Round ‘em up and throw ’em on a plane to Syria,” by all means raise your thumbs up Don Cherry style and say “right on” if you can’t help yourself. Just bear in mind those you banish may include the suspicious-looking people over there: the ones wearing masks and minding their own business. Hey, they might even be heroes. Consider The Avengers.