Prohibition created the perfect storm for the mass incarceration of ethnic minorities, who’d been driven into the contraband trade through inequality of economic opportunity, then zealously policed for being involved 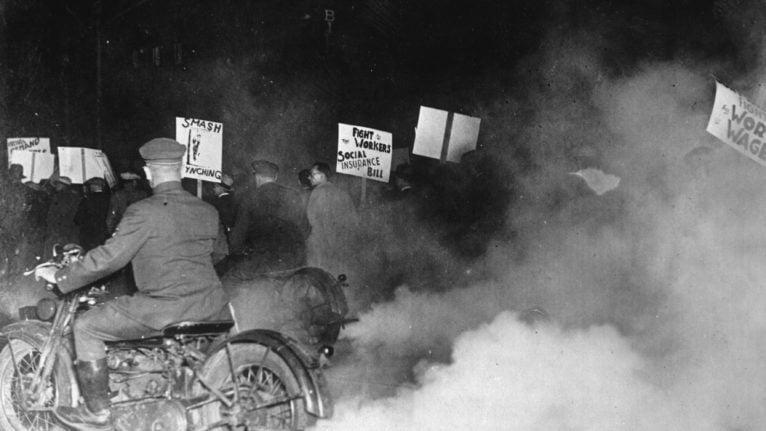 New York police on motorcycles wrap a demonstration in fog to prevent the demonstrators at the march-past in front of a building in which President Herbert Hoover is speaking in New York, 1930. (Photo by Imagno/Hulton Archive/Getty)

This is the second piece of a two-part series on the history of Prohibition, white terrorism and discriminatory policing in America, which revealed ingrained racism and tore America apart in the 1920s and ’30s

January 1920: The saloons were shuttered, liquor stores sold out and boarded up and just about everyone with enough space—and money—had hoarded a closet full of booze.

You might think the Anti-Saloon League (ASL), which had worked for nearly three decades to make Prohibition a reality, would have celebrated with a soda fountain treat and called it a day. Game over, right? Nope, the ASL was just getting started. Its sights were set on making laws tougher, getting police to prioritize the enforce of those laws and, while they were at it, extending their anti-alcohol legislation into foreign territories—Mexico and Canada, in particular.

Canada had been dry under the War Measures Act, which was suspended, funnily enough, in January 1920. As America went dry, Canadian provinces and territories, especially Quebec, British Columbia and Yukon, were heading wet, since they could go back to regulating their own alcohol laws without federal interference. The ASL tried to interfere wherever it could, starting in 1919, when it held a conference in Toronto to establish the World League Against Alcohol, a cross-border, wildly-ambitious, partnership designed to abolish alcohol from the planet earth.

MORE: What Prohibition teaches us about race relations in the U.S.

At home in the United States, the ASL’s top priority was enforcement. Although we commonly hear that people drank more during Prohibition, that wasn’t quite true, especially at first when alcohol consumption fell by roughly two-thirds. As alcohol became contraband, prices went up. Many couldn’t afford it.

Those that could, however, still drank. And many of the people who supplied that contraband alcohol were those who had trouble finding work that paid a living wage in the depression of 1920-1921. Unsurprisingly, in that xenophobic era when the motto was “America First,” a lot of the unemployed were ethnic or religious minorities. The way the law was structured, however, meant that only the bootleggers, speakeasy owners and rum-runners would be penalized—not their customers. Drinking alcohol was perfectly legal, but selling it wasn’t.

That was the perfect storm for the mass incarceration of ethnic minorities, who’d been driven into the contraband trade through inequality of economic opportunity, then zealously policed for being involved. For a more in-depth understanding of how this played out, check out Lisa McGirr’s War on Alcohol: Prohibition and the Rise of the American State and The Condemnation of Blackness: Race Crime and the Making of Modern Urban America by Khalil Gibran Muhammad. In it, McGirr argues that the 1920s shaped modern racist policing.

MORE: Vote that Willy Lump Lump out of the White House

Take 1920s Manhattan as an illustration, which is often celebrated for its proud, young white scofflaws who bravely defied an immoral and antiquated law with rebellious wet-ness and patronized an estimated 10,000 speakeasies. Much of the actual trade, however, took place in Harlem or south of 14th Street, which were largely populated by Blacks and recent immigrants from Southern and Eastern Europe. Those were the people taking the risks—and paying the price.

Aside from uniformed police, the era also saw a rise in vigilantism. The Ku Klux Klan (KKK), an organization aligned with the ASL, gained millions of members in the 1920s (it’s sometimes referred to as the organization’s “second wave”), many of whom took it upon themselves to enforce Prohibition laws, citing lax or corrupt authorities.

“Enforcement,” however, looked a lot more like white mob violence than rule of law. Speakeasies were torched in Little Rock, Arkansas. People suspected of bootlegging or heavy drinking were tarred and feathered in Texas. In Ohio, Illinois and Indiana, gangs of “raiders,” deputized themselves and busted up speakeasies and still operations. Fiery crosses were burned on the lawns of suspected Jewish and Italian bootleggers and, to the KKK and ASL, pretty much all Italians and Jews were considered guilty of being in the trade.

Canada had card-carrying KKK members, too. And Prohibition remained popular in many provinces for the same reasons it had traction in the United States. Namely, anti-immigrant sentiment, xenophobia and long-standing racist concerns over First Nations and alcohol. Despite this, in the mid-1920s, many Canadian provinces started to repeal prohibitions, largely for economic reasons—farmers wanting a bigger market for grain and governments needing tax revenue.

Republican President Calvin Coolidge entertained no such thoughts. Confronted with violence and lawlessness, the party line was more law and order—both at the state and federal levels. Many states implemented “bone-dry” laws that outlawed medicinal alcohol and/or sacramental wine and commanded stiffer penalties.

In 1927, the feds established a dedicated and independent Bureau of Prohibition and hired more agents. That was also roughly the same time the federal government implemented a poisoning program to add adulterants like shellac, nicotine, camphor, acetone and extra methanol to “industrial” alcohol so that bootleggers couldn’t buy it and turn it into something drinkable. Possibly as many as 10,000 died from this government initiative.

Prohibition was a mess, and not even for the reasons you usually hear about, like mafia turf wars erupting on the city streets of Chicago and Detroit. The problems were deeper and more complex. They involved systemic inequality and increased rural poverty. The 1929 stock market crash and ensuing depression was the last straw. The initial downturn wasn’t necessarily his fault, but newly-elected Republican President Herbert Hoover made things worse with stiff tariffs, the deportation of Mexicans, a general resistance to intervene and a refusal to provide meaningful aid. One year after the financial crash, he lost Congress to the Democrats in the 1930 mid-term election.

The economy was, perhaps, the biggest issue, but voters were also tired of chaos in the streets and heavy-handed fascistic responses from authorities. Prohibition was a part of this proto-fascism and inequality, but Hoover wouldn’t consider doing away with the law. To Republicans still aligned with the ASL, the problems with Prohibition could only be solved by more police, tougher laws, more arrests and longer prison terms.

In response, women’s’ associations, labour groups, farmers’ collectives and the NAACP (National Association for the Advancement of Coloured Peoples) started protesting and/or organizing voters to head to the polls. Leading up to the 1932 election, the NAACP helped bring about the first phase of the National Negro Democratic Swing, persuading many to abandon the Republicans, despite the demographic’s long-standing allegiance to the party of Lincoln.

This brings us right back to where we started this story in part one, namely, the Bonus Army marches of the summer of 1932, which saw starving U.S. army veterans and their families beaten back with violence instead of being met with reason or compassion. On top of the shattered economy, years of terror and discriminatory policing, the administration’s brutal response to the marchers was a factor in Hoover’s historic loss to Franklin Delano Roosevelt in November. The Democrats held onto Congress, won the Senate for the first time since 1916, carried 42 states and won the electoral college 472 to 59.

FDR was flawed, as any modern historian will tell you. But the broad coalition that backed him helped bring about the New Deal, which built unprecedented social welfare, offered people jobs in massive public works projects and dismantled one of the most discriminatory laws to have ever been imposed in America. And it was driven by a desire to save the nation from chaos and creeping fascism backed by a powerful lobby group and its militias.

The New Deal didn’t end mass incarceration, racist policing or the existence of the KKK in North America, obviously. But the KKK and ASL both lost members in droves and, as a result, they lost their power. That election proved to be a turning point that moved things in a better direction.

This time around, there’s still room to hope that we’ll see an echo of 1932. And if it happens, hopefully America can make even more meaningful changes this time.