What Prohibition teaches us about race relations in the U.S.

Prohibition propaganda leveraged anti-black racism, anti-Semitism and anti-immigrant sentiment with stories and images that painted various “others” as debauched, immoral and a threat to wholesome white families wrapped in the American flag 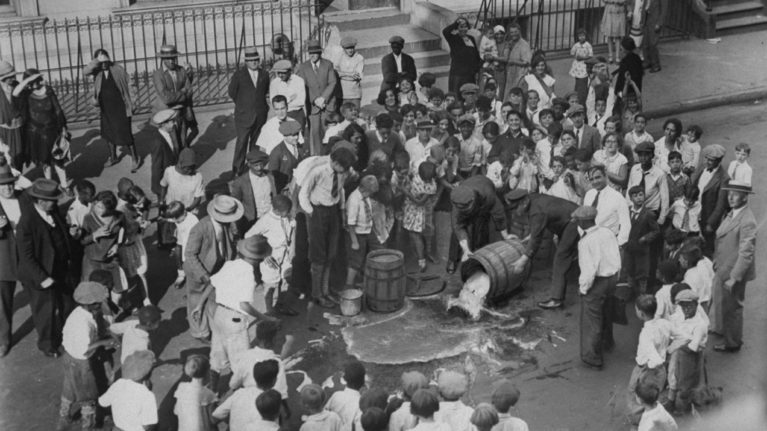 Beer is dumped into the street by police officers on Sep 13, 1929 after police discovered a home-brewed in a home. (NY Daily News Archive/Getty Images)

This is a two-part series on the history of Prohibition, white terrorism and discriminatory policing in America, which revealed ingrained racism and tore America apart in the 1920s and ’30s.

Parallel to the racial protests of today, the summer of 1932 saw more than 10,000 protestors marching in Washington, D.C., to oust Herbert Hoover, the wildly unpopular Republican president.

The Great Depression was not entirely Hoover’s fault, but the hungry, unemployed and homeless felt the tariff-happy president who refused handouts wasn’t up to the task, and as a result, he was making problems worse. In response to his inaction, there were hunger marches all over the country that year. The United States was in its third year of depression, with record numbers of jobless and homeless citizens, and no federal aid in sight. The federal coffers were low, a problem that could have been addressed by repealing Prohibition, but Hoover wouldn’t even entertain the thought of making alcohol legal again. The most volatile and famous of these demonstrations was the “Bonus Army” marches, which saw veterans and their families make pilgrimages to the capital from all over the country demanding either a bonus or a job.

The bonus in question was a deferred payment the government had promised First World War vets, scheduled to be paid out in the 1940s. Given the depression, the vets wanted to be paid early, arguing that many would die of hunger long before their “tombstone bonus” could be cashed in. In mid-June, a Democrat-led Congress passed a bill for an early release of funds, but two days later, the Republican Senate killed it.

The Bonus Army had refused to leave D.C. until they were paid and kept up a vigil of “silent death marches.” Six weeks later, the Attorney General, William D. Mitchell, ordered to have them cleared out. Police shot and killed two activists. General George Patton had also ordered the cavalry charge to disperse the crowds with bayonets and tear gas. Then the authorities burned their camps. Washington looked like a war zone. People wondered if the republic—and democracy—would survive.

Hunger marches weren’t unique to the United States. In December, 1932, for example, a group of farmers and labour activists journeyed to Edmonton’s provincial legislature to demand help. Some 10,000 assembled to witness or participate in the protest, only to be dispersed by a violent police riot ordered by Premier John Brownlee. That same year in England, a massive hunger march made its way to London to protest restrictions on government aid. Hunger marches persisted in Great Britain for years.

In the United States, however, the marches started to subside in early 1933. Why? In part, because under Franklin Delano Roosevelt, the new Democratic president elected in November 1932, the protestors were finally offered jobs. Plus, Prohibition, which had made the sale and manufacture of alcohol illegal over a decade earlier, and had simultaneously given white supremacist groups and police an unofficial license to harass and incarcerate minorities, was going to be lifted as part of the comprehensive and ambitious “New Deal” the American people had voted for.

We’re not being glib here and suggesting that all people needed was a glass of beer to solve America’s maze of problems. The end of Prohibition was significant, though, because it marked the end of the 13-year ban on alcohol, which was a divisive, discriminatory and insidious piece of legislation that was responsible for over 10,000 fatalities—many from poisoned alcohol.  Armchair historians characterize Prohibition as either fun times in flapper dresses or a story about religious reform and unintended consequences. It wasn’t fun for most people, however, and it wasn’t nearly as much about real religious values as it was about sanctioning white terrorism and establishing mass incarceration in the name of religion. In short, most everything people think they know about Prohibition is wrong. And that matters now, since a lot of problems we still have today are rooted in discriminatory practices from that era. Here, then, is the backstory to the ordeal that led up to the chaos and desperation of 1932.

Much of this will be a surprise to those who believe Prohibition was brought about by some well-meaning Christian women. The Women’s Christian Temperance Union (WCTU), a powerful grassroots organization from the late 19th century, put temperance on the map, but it was actually the efforts of the Anti-Saloon League (ASL) that got the deal inked. This organization, under the leadership of Wayne Bidwell Wheeler, invented “pressure politics”—flooding the public discourse with incendiary propaganda and intimidating politicians to support its campaign to do away with the saloon.

Much of the ASL’s propaganda leveraged anti-black racism, anti-Semitism and anti-immigrant sentiment with stories and images that painted various “others” as debauched, immoral and a threat to wholesome white families wrapped in the flag. As renowned lawyer Clarence Darrow famously said in 1924: “I would not say every Anti-Saloon Leaguer is a Ku Kluxer, but every Ku Kluxer is an Anti-Saloon Leaguer.”

One pivotal moment that forged this powerful alliance between the KKK and the ASL was the Atlanta Race Riots of 1906, a three-day massacre that saw white mobs terrorize the city’s black residents. At least 25 black men and women were killed, but likely more. The riot was sparked by “yellow journalism“, which is what they called deliberate and incendiary disinformation back in the day. In this case, two rival newspapers peddling fake news stories about four white women raped by black men. The papers had linked the alleged (and wholly unsubstantiated) rapes to some black-owned saloons on Decatur Street, which, after the news got out, were targeted by white mobs.

The bars were an easy target, since Atlanta’s white residents were increasingly anxious about a rising black middle class that was gaining financial independence through entrepreneurship. Bars were a part of that. In addition, ideas about black men being unable to control themselves under the influence of alcohol had been peddled as part of the racist discourse.

Prior to 1906, Prohibition didn’t have a lot of traction in the south, and not a single state had voted itself dry. Most support for Prohibition was found in predominantly rural areas of the Midwest and Northeast, where the ASL had successfully leveraged anti-immigrant feelings to convince people that saloons where southern and eastern Europeans gathered needed to be shuttered.

The Atlanta massacre, where white mobs attacked African-Americans for two days in September in 1906, changed that. Even though it was white men who had perpetrated the violence, somehow the takeaway was that alcohol in black communities was the root of the problem. Five southern states went dry between 1907 and 1909—Oklahoma, Georgia, Mississippi, North Carolina and Tennessee. The laws gained support because they accomplished three things—shuttering some black-owned businesses, closing community gathering places and providing a pretext for harassing black men. These were Jim Crow laws. And they were important pieces of the puzzle in the lead-up to making the sale and manufacture of alcohol illegal nationwide by constitutional amendment, a law that came into effect in January 1920, just over 100 years ago.