A holy man with an eye for connections

The genteel, moderate Aga Khan’s network is on the rise in Canada 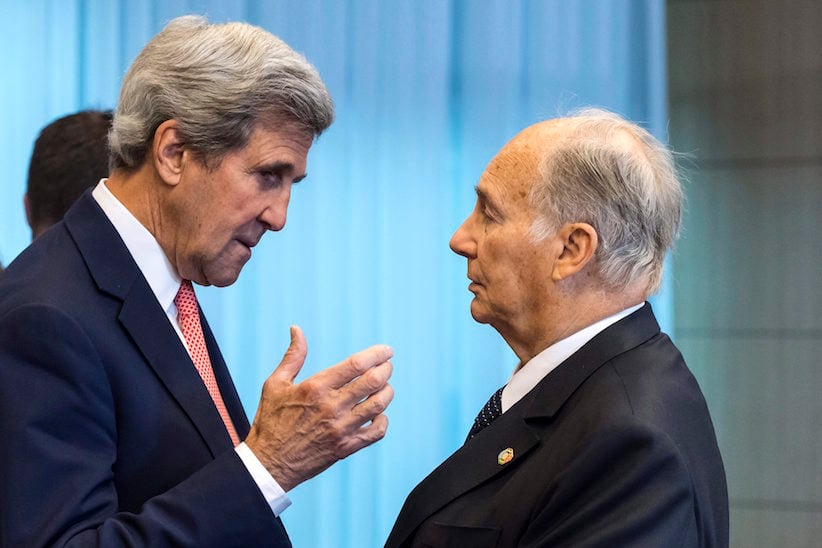 U.S. Secretary of State John Kerry, left, talks with Prince Aga Khan during a Conference on Afghanistan in Brussels, Wednesday, Oct. 5, 2016. The two-day conference, hosted by the EU, will have the participation of over 70 countries to discuss the current situation in Afghanistan. (AP Photo/Geert Vanden Wijngaert)

Of two notable speeches from very different Muslim leaders scheduled this month for influential audiences in Canada, only one was delivered. In Ottawa, Zijad Delic, executive director of the Canadian Islamic Congress, had been asked to speak at National Defence headquarters, but that invitation was revoked by Defence Minister Peter MacKay over charges that the congress’s leaders have taken extremist positions in the past (even though Delic is widely seen as a moderate). There was never any doubt, however, that the second speech would go off without a hitch. The Aga Khan, hereditary leader of the world’s 15 million Ismaili Muslims, gave the Institute for Canadian Citizenship’s annual LaFontaine-Baldwin lecture in Toronto with his customary cosmopolitan suavity.

The contrast in the tale of the two speeches is not one that the diplomatic Aga Khan, or his expanding network in Canada, might want to highlight. Yet his ability to present himself, and Ismailis in general, as a constructive, non-threatening face of Islam is a striking achievement in an era when other Muslim groups often struggle even to be heard. It’s nothing new. For five decades, His Highness Prince Karim Aga Khan has championed pluralism, and Ismailis have earned a reputation as quick adapters in societies that welcome diversity, including Canada. “I am impressed by the fact that some 44 per cent of Canadians today are of neither French nor British descent,” he said in Toronto, praising the Canadian example as “an asset of enormous global value.”

If it sounds like an old smoothie flattering his audience, facts on the ground show there’s more behind his words than graciousness. The global interests the Aga Khan heads—a multi-billion-dollar blend of business, philanthropy and quasi-diplomatic work—are dramatically increasing their presence in Canada. In 2008, the embassy-like Delegation of the Ismaili Imamat opened on Ottawa’s Sussex Drive, at a prestige address not far from Foreign Affairs headquarters. Last spring, Prime Minister Stephen Harper conferred honorary Canadian citizenship on the Aga Khan, who lives in France, at the sod-turning for a sprawling Ismaili cultural complex in Toronto, slated for completion in 2013, which will include a major museum of Islamic art. And earlier this month, the Aga Khan chaired the first board meeting of the Global Centre for Pluralism, a new Ottawa-based research institute, launched with $30 million from the federal government and $40 million from his own Aga Khan Development Network.

All this action has given the Ismailis a bigger Canadian presence than ever before. The history of the community in Canada goes back to Idi Amin’s expulsion of South Asians, many of them Ismaili, from Uganda in 1972. As a long-time friend of Pierre Trudeau, the Aga Khan picked up the phone during the crisis to ask the prime minister to make Canada a safe haven. Trudeau’s government opened the doors. (The Aga Khan was an honorary pallbearer at Trudeau’s funeral in 2000.) About 5,000 Ismailis from Uganda immigrated, followed by a steady flow from other East African countries. They now number about 45,000 in Canada, their success underscored this week by Ismaili Naheed Nenshi’s election as Calgary’s mayor.

If the Aga Khan’s link to Canada began with a personal bond and an urgent need, the connection has deepened. “What the Canadian experience suggests to me is that identity itself can be pluralistic,” he said in Toronto. “One can embrace an ethnic or religious heritage, while also sharing a sense of national or regional pride.” Still, few Canadians know much about the Ismailis. They are a minority within the minority Shia branch of Islam, dispersed through South Asia and Africa over centuries, and more recently into Europe and North America. Ismailis often experienced persecution, sometimes from larger Muslim groups.

Amyn Sajoo, an Ismaili author and visiting scholar at Vancouver’s Simon Fraser University, says having to fit in has made them “extremely adaptive” to the cultures around them. “You don’t misread tradition,” Sajoo says, “as a comfortable home where you can hide from changing realities.”

The Aga Khan embodies the Ismaili reputation for embracing modernity. Born in 1936 in Geneva, he grew up partly in Nairobi. He was still studying at Harvard University when his grandfather died in 1957, after choosing his promising grandson as his successor—passing over young Prince Karim’s father. The Aga Khan now runs a major international aid network, closely allied to his businesses, based in Geneva. He’s also a famous breeder of thoroughbreds—on the day before his Toronto lecture, his stable’s Shalanaya placed third in the E.P. Taylor Stakes at the city’s Woodbine Racetrack.

In Toronto, the Aga Khan was introduced by former governor general Adrienne Clarkson, and interviewed on stage after his speech by her husband, author John Ralston Saul. Clarkson and Saul are the driving forces behind the yearly LaFontaine-Baldwin lecture, named for the pre-Confederation reformers who laid the key groundwork for Canadian democracy. The Aga Khan linked Canada’s version of federalism to struggles around the world to knit together diverse ethnic, religious and language communities. He pointed out that India’s constitution defines rights for eight cultural groups. In Kenya and Kyrgyzstan, he said, reforms to decentralize power to ease ethnic tensions are now under way.

Yet the Aga Khan balanced his call for governments to find ways to safeguard diversity against the need for citizenship to mean something. “Afghanistan is a case in point,” he said. “In contrast with places where inflexible nationalism can be a problem, Afghanistan suffers from the opposite condition—an inability to imagine, let alone create, a broad sense of nationhood.”

And Afghanistan is where Canada’s foreign interests and the Aga Khan’s concerns intersect most clearly. His aid arm is very active in the country, in some cases working in partnership with the Canadian International Development Agency. That work, mainly in Afghanistan’s central highlands and northern provinces, is overshadowed by the fighting in Kandahar, but is expected to continue long after Canada withdraws from combat next year.

Sustained co-operation in Afghanistan is likely to further strengthen ties between the Canadian government and the Aga Khan’s network. At home, though, the influence of Ismaili institutions on the way Muslims are seen in Canada is harder to predict. Yvonne Haddad, a professor of Islamic history and Christian-Muslim relations at Washington’s Georgetown University, says the ingrained view of Ismailis as a clearly separate minority within Islam limits their impact. Although Haddad says the Aga Khan’s organizations have helped educate “a core of articulate scholars of Islam,” she says these Ismaili professors sometimes have trouble being heard beyond the universities. “They are just wonderful people,” she says, “but they can’t be mediators.”

Simon Fraser University’s Sajoo disagrees, pointing to the goodwill and practical working relationships created by the Aga Khan’s far-flung philanthropy. “The majority of beneficiaries, thousands of people in Africa, Asia, the Balkans and the Middle East, are not Ismaili at all,” he says. “So interaction with other Muslims is profound.”

The need for moderating influences, both among Muslim communities and between the Islamic world and the West, has rarely felt more pressing. The economic downturn has only exacerbated post-9/11 stresses. The Aga Khan cited economic fears as a cause of rising anxiety in Europe about Muslim immigrants. He said conflict in developing countries among ethnic groups goes hand in hand with diminished prospects of rising out of poverty. “The codependent nature of economic deprivation and ethnic diversity,” he said, “is evident throughout most of Asia and Africa.”

As a businessman who grasps economics, and a religious leader acquainted by necessity with the perils and possibilities of diversity, the Aga Khan is well qualified to talk about that linkage. And here in Canada, where his network grows ever more prominent, he’s increasingly assured of being heard.