A river runs through it: The story of the hardiest boat in Edmonton

For 25 years, a succession of owners have propped up the 399-passenger sternwheeler that plies the North Saskatchewan River. It may never be a moneymaker, but for the current owner, keeping it afloat is victory enough 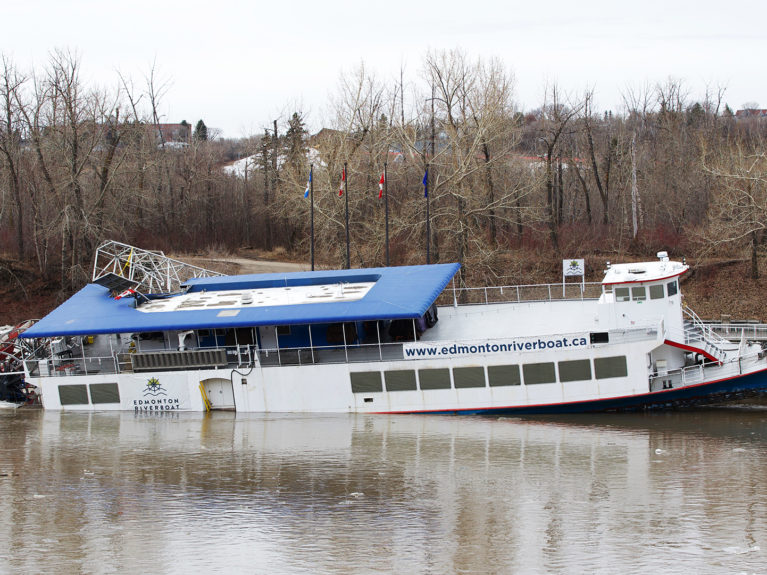 Jay Esterer was eyeing a 52-metre boat on the auction block when his father, a former boat builder and seafarer, issued a time-honoured warning: A boat is a hole in the water where you dump money. Esterer, an Edmonton paint manufacturer, grasped the truth of that adage even before the online gavel sounded on his 2016 purchase. He had led the bidding at $80,000, with a half-hour to go, when the price soared to $553,000 amid a bidding war with, it turned out, a fellow business figure Esterer knew.

Normally, a person who overpays for a boat to the tune of six figures has landed some swishy yacht. But Esterer is part of a lineage of quixotic entrepreneurs unique to northern Alberta, whose pricey hobby purchase has been a beleaguered, 399-passenger sternwheeler that plies the North Saskatchewan River. Most years, that waterway is iced over for longer than it’s open for cruising by this floating restaurant. Even those months often feature lousy, low-ebb waters that are unnavigable to the Edmonton Riverboat, formerly known as the Edmonton Queen.

One morning in late April, as the ice thawed, Esterer rushed to the river valley to discover two holes in his vessel—one in the steel hull’s rear compartment and one in its midsection. A three-metre overnight surge in river volume had lifted the boat high, turning the gangway into scrap metal. When the waters quickly receded, the boat landed atop the two steel piles to which it is normally moored. It came to rest at a sharp list—unsunk, but with its impaling pillars holding it tragicomically askew.

READ MORE: Inside a dramatic rescue in the North Atlantic

Fixing the boat would be a daunting project, but one for later. First, Esterer had to figure out how to get it unstuck from the piles. Any crane capable of lifting a 250-tonne vessel—it could be 400 tonnes when waterlogged—would be too big to descend into the river valley. He considered inflating large airbags in the hull to displace the water, then using a big excavator to tip the riverboat sideways.

The good news for Esterer: He has hull insurance. The bad: Fixing the boat will likely cost more than it’s insured for. After buying the tourist attraction, he’d sunk an additional $1 million into refurbishing it. He’d had it running for only the 2018 and 2019 seasons before the coronavirus indefinitely delayed this year’s opening cruise.

Esterer says he always knew his dad’s warning was right, but he was never bothered by the risk. “I recognized it was not going to be a moneymaker, and I am all good with that. I like the idea of bringing back something that’s disused and abandoned.”

Disused and abandoned? Sounds like a decent working title for the riverboat’s sordid three-decade history. It began as the early-1990s dream of retired Edmonton businessman Ray Collins, who was enamoured with tales of the city’s turn-of-the-century paddlewheelers, though they were prone to getting stuck in the North Saskatchewan silt when the river ran low. Collins had tried to revive that culture in 1964 with the 80-passenger Little Klondike Queen. But it frequently ran aground (physically and financially) and operated in Edmonton’s picturesque river valley for only a couple years.

Collins’ second boat would be more than three times as large as the Klondike Queen, and manufactured by a city boat-maker—it generated so much local excitement that the Edmonton Journal ran a 1993 contest to come up with its name, the Edmonton Queen. The boat came in vastly over budget at $2.2 million, and the fabrication yard held back delivery. Lawsuits ensued. Collins’ venture went bust, and sawmill owner Dick Corser had partnered with a property developer to pluck it from bankruptcy for what then seemed a steal: $800,000.

Craig Corser, Dick’s son, recalls it as a retirement project for his father. The Queen launched in 1995, but the new owners were unready for the choppy seas of the restaurant business—let alone routine cancellations of cruises due to low water. Or the ice pack that dislodged the boat from its moorings in 1997, inflicting $300,000 worth of damage.

By 1999, the development partner had left the business, Craig had taken over operations and Dick was instructing his son to get rid of the stress-inducing vessel. “Craig, it’s like a hand grenade with the pin pulled,” the son recalls his father saying. “You’ve got to find someone to pass it to.” The younger Corser pledged to find a buyer but wanted to keep any operating profits in the meantime. Alas, there were none. He sold it, he recalls, for “virtually nothing.”

The Queen eventually got scooped up by a consortium of northwest Alberta Indigenous bands. But after a string of poor seasons, they put it up for auction. Esterer came in and renamed it, less regally, the Edmonton Riverboat.

April’s nautical disaster was the third costly one in a year. A strong current in July pushed the vessel onto a sandbar, forcing Edmonton fire boats to rescue 300 diners; in December, another river surge battered the boat’s awning and gangway.

Too much water in the off-season, not enough in the summer—or however Stan Rogers might sing it—has been the ballad of this boat since the start. Esterer may concoct verses bemoaning city hall’s refusal to let him pull the boat ashore in the offseason. Or the fact that his vessel may be too big for either river flow or diner demand. Alberta’s premier water-borne restaurant may yet float again, but its owner is resigned to the likelihood that, financially speaking, it will always be taking on water.

This article appears in print in the May 2020 issue of Maclean’s magazine with the headline, “A river runs through it.” Subscribe to the monthly print magazine here.