Stephen Maher: Fear-mongering about U.S.-backed environmental groups is a symptom of strain on the oil industry. Next will come demands for government support. 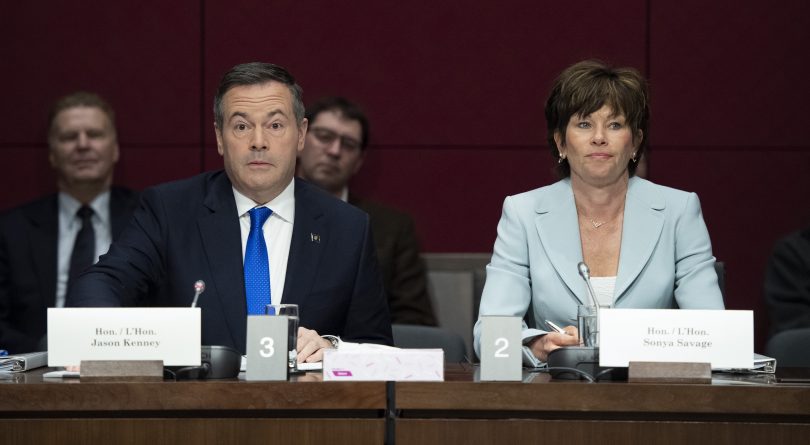 Kenney and Alberta's minister of energy, Sonya Savage, at a Senate committee hearing not long after Kenney announced his $30-million 'war room' to counter criticisms of the province's oil industry. (Justin Tang/CP)

Last month, when Jason Kenney announced the creation of a $30-million war room to fight for Alberta’s oil industry, one of the people standing on stage with him, looking on approvingly, was Stewart Muir, executive director of Resource Works, a British Columbia group that was created to rally support for petroleum projects like the Trans Mountain pipeline that will move Alberta bitumen to the Pacific.

Muir is one voice in a growing chorus that laments the attacks on Alberta’s industry from environmental groups, particularly those that take money from similar organizations in the United States.

The lead soloist is Vivian Krause, an independent researcher who has followed the money from American foundations to Canadian environmental groups, and has come to the conclusion that Canadian greens are acting as the agents of American industrial interests who profit by land-locking Alberta oil, in particular the Rockefeller election machine.

This conclusion, which could be charitably described as unproven, is a powerful rhetorical tool for Alberta’s oil industry, providing a focus for the anger of the many people in the oil patch who have been struggling to pay their bills since American fracking boom drove oil prices down.

You can’t campaign against changing market conditions, though, and every good story needs a villain, so the oil patch’s spinners settled on foreign-funded environmentalists who are in league with Justin Trudeau in a conspiracy against hard-working Albertans.

It doesn’t matter much that the details don’t stand up to close scrutiny when the audience is primed for a good yarn. Many in Alberta, for instance, suspected that Trudeau spent $4.4 billion on the Trans Mountain pipeline so that he could kill it, right up until he announced that construction would begin this summer.

The fact is that both sides in the political struggle over the future of the oil sands are taking their lead, and taking money, from Americans.

Muir, who stood with Kenney and Krause when Kenney announced his war room, for instance, has taken $27,500 from Devon Energy, an Oklahoma company that until recently had a piece of the oil sands.

The fact that he is working for American oil interests hasn’t stopped him from denouncing those who take money from American environmentalists:

“At one level, this is the story of how American money was used to weaponize eco-radicals on Canada’s west coast, resulting in economic advantage for the good ole USA. Criminal that it’s still happening,” he tweeted on April 13.

On the other side of the battle it is the same. Environmentalists complain that the pro-industry forces take their marching orders and money from the Koch brothers, the American dark-money men who fund pro-oil think tanks like the Fraser Institute and write policy for Republicans.

RELATED: Jason Kenney to take his anti-Trudeau show on the road

Both sides are right, because the battle in Canada is an extension, in a way, of a death struggle in the United States, between an incredibly powerful petroleum-industrial complex and those who believe that it is destroying the planet.

It’s a political and public relations battle, but the winner may depend on economic and technological struggles that are not yet decided.

U.S. President Donald Trump has surrendered American energy policy to the climate-change deniers who serve masters in the oil industry, but many states have continued to reduce emissions, by imposing auto emission standards and switching to renewables away from coal.

Groups like Resource Works want Canada to back petroleum, and they seem to have convinced Conservative Leader Andrew Scheer that the best way to fight climate change is to export Canadian gas to Asia, so that Asians can use it to generate electricity instead of burning higher-carbon coal. Environmentalists argue that gas isn’t much better than coal and we should be transitioning directly to renewables.

It’s a take-no-prisoners battle, with billions in long-term utility contracts at stake, and the Canadian oil patch and its political allies are increasingly strident in their arguments and techniques, painting even moderate environmentalists like the people at the Pembina Institute as enemies of the people of Alberta.

This new militancy is the result of the economic suffering in Alberta, but also likely the result of changes in ownership of the oil sands. Since 2016, when oil bottomed out at US$27 a barrel, seven international oil and gas companies have sold Canadian assets. The most recent was Devon, who helped fund Resource Works, which unloaded its oil sands stake to Murray Edwards’ Canadian Natural Resources for $3.78 billion.

The 2017 departure of Shell, which was a big player with a more pro-renewable culture than the other companies, likely helped nudge the remaining players to a more militant stance, to the point that the Canadian Association of Petroleum Producers is barely speaking with the Trudeau government and has registered to advertise in the election in October.

Although engineers have worked wonders to bring down the average-per-barrel emissions, the oil produced at the vast mines around Fort McMurray remains some of the highest-carbon fuel in the world. It is also some of the costliest to produce.

The industry likes to point to projections that show continued strong demand for petroleum for decades to come, but there are other, equally likely scenarios, that show demand falling if policy makers around the world move away from petroleum and toward renewables or nuclear. Oil producers, in Canada and the United States, are under increasing strain, which will inevitably lead to increased demands for government support.

This week, Kenney announced a $2.5-million public inquiry to get to the bottom of the foreign dough that is attacking the oil sands, based, no doubt, on the research of Krause.

This will inevitably produce a lot of headlines, a lot of sound bites and lead to shareable memes circulating on the Facebook groups funded by petroleum companies.

It may change public opinion, but the environmentalists are not the cause of Alberta’s economic woes, and they are protesting the oil sands because they are worried about the climate crisis, not because they are puppets of foreign interests.

Amid all the yelling, Albertan taxpayers would be wise to keep their eyes on oil men with their hands out for government money.