After the fire: One last boom in Fort McMurray?

The rebuilding effort will bring a mad rush of activity to Fort McMurray. It can’t come soon enough. 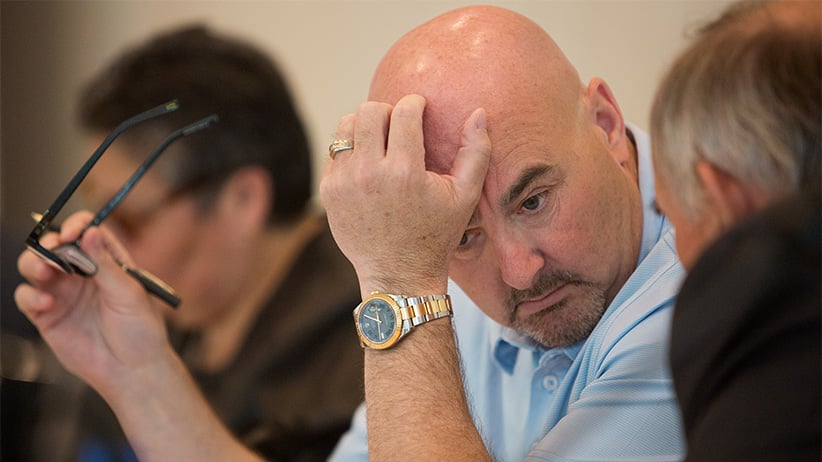 Fort McMurray Councillor Lance Bussieres during a council meeting in Edmonton, Alberta on Wednesday, May 18, 2016. (Photograph by Amber Bracken)

When they say downtown Fort McMurray was spared from the fire, they overlook Lance Bussieres’s home at the highway’s edge. Some embers or ash from the flaming hills above landed on his roof the night much of his hometown was ablaze. “Mother Nature is a strange lady, how she decided to take mine and leave the rest there,” he says.

While firefighters and wind managed to save almost everything else on the crescent, including the nearby hospital, Bussieres’s house of 20 years went from a 1,600-sq.-foot bungalow to basement crater. Its 1950s-era floor plan likely exists only in dusty architectural volumes, so he says he and his wife, Kelly, want to discuss with their insurer a smaller bi-level home, with an attached garage this time. He’d prefer to get into that replacement home by Christmas, but he’s realistic—it might not be until fall 2017, as he’s in a long rebuilding queue. There are more than 2,400 other destroyed homes and buildings.

Building contractors, along with everyone else, won’t be allowed into Fort McMurray to start that long recovery process until June. But they’ve spent much of May positioning themselves to rush back. “They can’t wait to get back to start the rebuild. We’re anxious,” says Bussieres, a realtor and councillor for the McMurray region (and, just his luck, the lone councillor whose house burned down).

They’re anxious to rebuild for two reasons: yes, to restore their beloved community, but also to give many Fort McMurray businesses the first solid string of projects since oil crashed some 20 months ago. Before the wildfire, hundreds of McMurrayites were worried about losing their homes and being forced to flee the city, but as economic refugees. “This is like a fresh start for everyone here, I guess,” says Bussieres.

This was supposed to be a city where, with the days of US$100 per barrel crude long gone and probably not coming back, residents would never again see the sorts of megaproject that had long turbo-charged the economies of Fort Mac, Alberta and Canada. Oil companies had been shuttering such initiatives as oil prices face-planted, and Alberta’s high production costs made it easy to walk away or let plans languish until sunnier times. 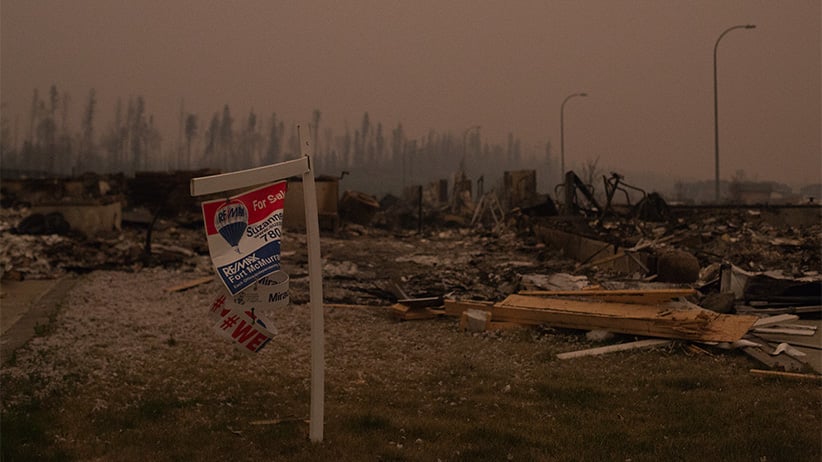 Thick smoke hangs over burnt homes along Prospect Drive in Fort McMurray’s Timberlea neighbourhood as wildfires continue to burn out of control in northern Alberta on Sunday, May 15, 2016. (Photograph by Amber Bracken)

But May’s inferno has ushered the mega-project phenomenon back, for perhaps one last hurrah. The rebuilding of Fort McMurray will take years, and it will be an economic titan—a mad rush of spending on goods and supplies, as well as labourers starved for the good wages a northern industry town offers. Only this time, the influx of capital won’t be borne by the likes of Suncor, Imperial Oil and Nexen. It will be financed by Intact Insurance, Wawanesa, Co-operators and their rivals, along with Alberta and Ottawa.

The Conference Board of Canada estimates the wildfire recovery efforts will add $1.3 billion to Alberta’s economy next year, and then more in years beyond. “Perversely, these types of tragedies always have a positive impact on the economy,” deputy chief economist Pedro Antunes says. Perverse, he explains, because it doesn’t take into account net asset loss or the fact this is all just replacement spending. But for a provincial economy expected to climb out of a two-year recession in 2017, the rebuild will lift real GDP by nearly half a percentage point, the Conference Board projects. It will boost the oil sands region’s economy by about eight or nine per cent—a burst of hyper-growth that can bring a level of booming chaos that few Canadian communities are familiar with, except for this one.

It’s not just homes. Insurance adjusters haven’t yet tallied the hundreds of cars and pickups that were scorched alongside those houses, in a region where dealership sales had lately plunged. And it’s not just all the replacement sofas, flat-screen TVs and ovens in those destroyed homes: tens of thousands of residents in intact houses and apartments will likely discard the refrigerators where food has been rotting after more than a month without electricity. Fort Mac could suddenly need the equivalent of one-sixth of all the new fridges sold in Alberta in a typical year, according to historical industry figures.

While this will keep staff at the local Brick store and GM dealership hopping, it’s the underemployed framers, drywallers and electricians who’ll be most keen to enjoy the return of work offers coming along with their own homecoming. Housing starts in the region had been around or beyond 1,000 per year for most of the last decade, but they shrank to 123 last year, and only 13 had been started through April of this year.

Maclean’s answers all your questions about the Fort McMurray fire here:

Rather than starve in the north, many companies had relocated. Cincor Roofing, a 12-person outfit, sent half its team full-time to Edmonton, and the rest joins them in winters as repair jobs dry up, project manager Cory Fabick says. Even though he hasn’t sorted out where a couple of burned-out co-workers will live, Fabick says they’ll all likely head north once rebuilding begins. Despite the downturn, in many cases a $10-an-hour wage premium has persisted on their labour in Fort McMurray, he says. “Everybody wants to be getting paid what they should be getting paid.” He expects work-hungry crews from around slumping Alberta will join the northern convoys, like so many Cape Bretoners and Newfoundlanders before them. “In this situation it’s a win-win. You’re going up there to help the city rebuild and you’re gaining extra wage,” Fabick says.

The region’s roughest crash in a generation has also created a unique environment where Fort McMurray can actually handle the coming influx of labourers to throw up several years worth of new houses in one or two years, along with the onset of several newly homeless McMurrayites. The once near-zero vacancy rate in rental apartments was, by last fall, 30 per cent, according to the Canadian Mortgage and Housing Corporation.

“If this unfortunate circumstance had happened four years ago, three years ago when the economy was red hot, there would have been absolutely no capacity to deal with it,” says Russell Dauk, Fort McMurray’s former planning manager and now a vice-president with Rohit Land Development. “We were going flat out every trade, every supplier was working, every apartment suite would have been full, every work camp bed would have been full.”

Alberta’s last two big disasters, the 2011 Slave Lake fire and 2013 floods, came in healthier economic times, when fewer labourers and accommodations were on hand. In the McMurray area, work camps erected to shelter oil sands workers will now likely host residential building contractors. Already, hundreds of trailers and lodge rooms have been reserved for the restoration workers tapped for earlier stages of the recovery, such as reviving the smoke-damaged hospital. In coming weeks, the insurance companies will pool resources to hire demolition crews for an en-masse cleanup of entire blocks and neighbourhoods, something not initially done to deal with the carnage of Slave Lake, said Bill Adams of the Insurance Bureau of Canada. The Alberta home builders’ association is pressing for a similarly coordinated effort in rebuilding. Although in Fort McMurray neighbourhoods, especially the older ones that suffered the fire’s brunt, competing insurance firms are dealing with individual policy-holders, many with different styles and ages of homes.

Fort McMurray companies that laid off in the downturn will be hiring back, such as Casman, the local construction and maintenance giant that had roughly halved the 600-person workforce it had two years ago. CEO Ben Dutton predicts a short-term hiring boom, but long-term it still doesn’t make sense to return to full strength, because the energy sector isn’t forecast to roar back. “The market’s not going to return to where it was in 2014, even with the rebuild,” Dutton says.

Most evacuees say Fort Mac now feels like home, and they want to return. The insurance-claim process offers a strong incentive for those who lost homes to rebuild, rather than get bought out for the value of the house but be saddled with the land. Bussieres, the councillor, expects the Fort Mac landscape will look different after the rebuild, but he’s not sure how.

Fabick, the roofing manager, has always rented rather than bought a roof of his own, after coming from Ontario for a boom five years ago. This mega-project will peter out and if it’s followed by more slim times there, he and his partner will move. “No city in Alberta is stable enough to see a five-year, 10-year long-term plan to stay,” he says. “A lot of people lose in Fort McMurray that way.”