For the record, here's what the Canadian icon told graduates at Mount Saint Vincent University 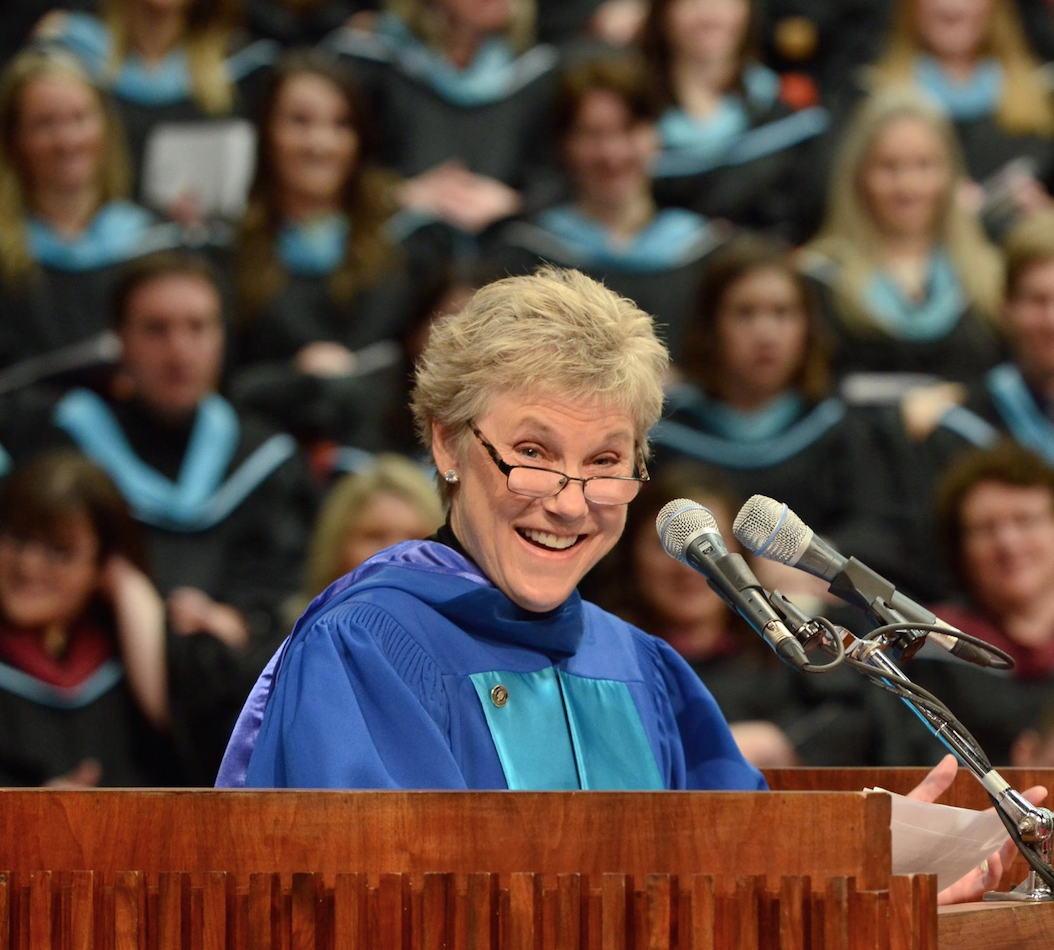 Thank you for that kind introduction and thank you so much for the degree you have chosen to bestow upon me today. I am really honoured.

It’s probably customary for convocation speakers to begin their remarks by saying how happy they are to be here. In my case, it happens to be VERY true. This is a deeply nostalgic moment for me because I spent my first year of university here. And how things have changed! A lot! I was 17 years old and I was studying in the faculty of arts. Let me correct that. I was ENROLLED in the faculty of arts.

Related: Mark Carney’s advice to the Class of 2016: ‘Be flexible’

It was a school for women only, run by the Sisters of Charity. And I came here mainly to study under a vocal coach who had agreed to come to the Mount to teach a few students. Between you and me, I think my dear mother secretly hoped that the nuns could transform me into a young woman of grace and refinement, something that she, despite her valiant efforts, was unable to do. Having been raised with five brothers, it would have taken divine intervention.

There was one building on this campus, Evaristus Hall. We ate, slept, went to classes and chapel all in that building.

It’s important to know that I was raised a Catholic in a primarily Protestant town and I had never had any contact with nuns. Well let me tell you, they ran a tight ship. It seemed to me as if they were everywhere. The halls of Evaristus looked really long to me and it seemed that it would take a lot less time if I would run to my destination. And that did work, until one day I heard, “Miss Murray! Yes Sister? Come back here please. Yes Sister. We don’t run in the halls here. Now go back where you started and walk down the hall like a lady. Yes Sister.” I often felt like I was doing something wrong even if I wasn’t. For years, after I left, I could still hear the rattling of the beads on their habits.

The doors of our building were locked at 6:30 or 7 at night and we weren’t allowed out after that. Except 2 nights a month. And those nights had to be a Friday or Saturday, one night until 11:15 and the other night til 12:15. Now, my mother was no push-over, but I had never had restrictions like this.

We were not allowed to wear slacks or pants at any time and had to wear skirts and heels to dinner. I wore the same grey skirt every night.

I remember that we had a couple of socials where we gathered in a large parlour and young men from Saint Mary’s were bussed in and dropped off. We were encouraged to mingle with the nuns peeking in every now and then. I can still feel how uncomfortable that was. However, I did meet a handsome young man at one of them and he invited me to a prom at Saint Mary’s. He must have been very leery about my sense of fashion, because a few days before the dance, he called to ask me if I wanted to borrow one of his sister’s dresses. I wore my own dress, but the relationship was short-lived.

I had a roommate who was a real character…she was so much fun and fearless. She somehow secured a key to the kitchen downstairs and would sneak down and get us midnight snacks. I lived in fear of her being caught. She was also very curious. She wanted to know what the nuns wore to bed so she pretended to be sick and knocked on Sister’s door in the middle of the night. Well she must’ve liked what she saw because she later became a nun herself!

Despite the general climate of austerity, we managed to manufacture our own fun and made some good and lasting friends. It was a year of transition for me, a stepping stone to the “real” world.

I had never seen the inside of a gym before I got here, and so I became the manager of the basketball team. Much to my surprise, I was elected president of the freshman class and I sang a solo in the annual campus variety show.

I’m not sure how many of the nuns’ life-lessons I absorbed, (well, a few I’m sure) but since then, I’d like to think that I have figured out a thing or two about how to conduct oneself in this challenging, often turbulent and fast- changing world.

If you have a dream, a passion and have the opportunity to make it happen, great. BUT, if you can’t get to it right away, which is quite often the case, give the job you’re doing 100 per cent and keep your eyes open. You never know what opportunity might arise … something you never thought of could become your life’s work. Success of any kind is the result of hard work … there’s no shortcut.

Don’t ever be afraid to ask for help. If you think asking for help betrays weakness, get over it. In fact, it’s just the opposite. It’s a sign that you’re confident enough to admit that other people may know more than you know or can do things better than you can. Your real challenge will be to find and surround yourself with those people and tap their brains.

Related: Sheryl Sandberg: ‘The lessons that I only learned in death’

You can often judge a person’s true character by how they treat people who are different, less powerful or influential, or less educated than themselves. Treat people well and with respect and they will treat you well back.

When you meet people, stand up if you can. Look them in the eye. Try to make them feel that they are the only person in the room. Have you ever experienced this? You’re introduced to somebody at a party and they look right past you, over your shoulder. I don’t know if they’re distracted or whether they’re looking around the room to see if there’s someone more important than you. Whatever it is, it doesn’t make you feel that good.

Get fit and stay fit. The way medical science is progressing, many of you will live for a long time so take care of those bodies! Run, walk, skate, swim, bicycle … the point is, that regular exercise will keep you healthy and will make you feel better about yourself. Make it a way of life.

As longevity guru Robert Butler put it, “If exercise could be purchased in a pill, it would be the single, most widely prescribed and beneficial medicine in the world.”

Thank you for inviting me to join you today. I congratulate all of you and wish you the very best.

FILED UNDER: Advice to the Class of 2016 anne murray Editor's Picks FOR THE RECORD