At home with Maygan Sensenberger

On how she met Sen. Rod Zimmer, and their life post-scandal

The Senate is Canada’s institution for sober second thought, but some senators have been distracted by other matters lately—namely Sen. Rod Zimmer, 69, and his 23-year-old wife, Maygan Sensenberger. The fascination began before their wedding. “Literally, the senators would pass Rod notes—one of them made a joke about something silly. I think it had something to do with Hugh Hefner. It was just fun,” laughs Sensenberger during an interview this week.

In Ottawa circles, rarely is the water cooler discussion this sensational: a prominent Manitoba Liberal marrying an attractive blond 46 years his junior. Sensenberger and Sen. Zimmer became international news in August—their one-year wedding anniversary—when Sensenberger caused a disturbance on a flight from Ottawa to Saskatoon and received a 12-month suspended sentence with one-year probation. Other charges of uttering threats against her husband and endangering the safety of an aircraft were dropped.

The couple was back in the spotlight last week. With her husband at her side, Sensenberger appeared on CTV’s Power Play to talk about her volunteer role in a short film. She has the lead part in a movie about a world run by women. (The working title is First Ladies.) Sensenberger was also part of Ottawa Fashion Week, modelling pieces by her designer friend, Gwen Madiba. One headline read: “Redemption on the runway. Maygan Sensenberger catwalks back to Ottawa.”

In an interview at their five-bedroom, red-brick home in tony Rockcliffe Park, surrounded by portraits of her and her husband, wedding souvenirs and posters of her idol, Marilyn Monroe, Sensenberger spoke to Maclean’s about what happened on the plane, her hopes of becoming a film star and the ongoing curiosity about her marriage to Sen. Zimmer.

She says she met her husband while working as a nanny in Toronto four years ago. “I was waiting outside the men’s washroom for the boy I was looking after. This guy in this fancy suit walks up to me and he’s like, ‘Hello, my name is Sen. Rod Zimmer. How are you?’ I forget exactly how he worded it but it was pretty much, ‘Don’t worry, I am not hitting on you.’ He thought the boy was my son. He kind of insulted me because the boy was nine years old and I was 19. I made a joke that I didn’t know what a senator is. I really didn’t know what it was—I knew they were in politics but I didn’t follow politics. We exchanged cards and he said he knew someone in the entertainment industry.”

It went from there, despite the difference in age and backgrounds—she grew up in cottage country in Collingwood, Ont., the daughter of restaurant owners; he was a business executive, Liberal fundraiser and philanthropist in Manitoba who was appointed to the Senate under Paul Martin.

“I felt something for him,” says Sensenberger. “I was raised right by my parents. My parents love me and I love them. I don’t have daddy issues. It is pretty obvious this is not something people look fondly on so it was very confusing at first. Both of us were like, how is this going to work? We would go for coffee and, for the most part, it was just friendship at first. I liked him—but he’s older than my grandfather.

“Eventually, we were having dinner and he was flirting with the waiter about French wine—I didn’t even understand what he was talking about—and I was like, ‘I love you.’ He is the best man I’ve ever met. They don’t make them like him anymore.”

She kept the relationship a secret from her parents for six months and his family did not attend their wedding (she says it was not the age difference, but because they were married in an Anglican church—he was raised a Roman Catholic). “To anybody who doesn’t know us, there’s a lot of judgment. But as soon as people talk to us, they’re like ‘Okay, I get it.’ We just work together.”

She says they have a lot of mutual interests. She is a certified personal trainer and he was a champion swimmer, diver, lifeguard and water skier. They love ballet (she did ballet and he was the president of the Royal Winnipeg Ballet) and movies. “We go to receptions for embassies and some little things like that. But we’re not really big partiers. A regular night is watching movies or watching whatever team is on. Then we have dinner and a nice romantic night in. That’s pretty much our social life. We’re kind of boring.”

They take their dog Tinkerbell for walks, enjoy picnics, flying on small planes and shopping for knick-knacks. “We raid Value Village every weekend,” she says, joking that her house looks like a yard sale.

The lifestyle Sensenberger paints is a stark contrast to the image portrayed in Britain’s Daily Mail newspaper at the time of the incident—the paper posted photos of her partying from her Facebook page, and referred to her as a “good-time girl.”

She says she was hurt by the coverage and online attacks, and says the airline affair was “humiliating” and overblown. “They completely blew up everything. There were statements that were put in the papers—they were violent, evil things that not only could they have been misheard, but they weren’t said.

“Yes, I did cause a disturbance and any wife would cause a disturbance if she thought her husband needed help.” She blames the commotion on worries over an earlier hornet attack and her husband’s refusal to go to hospital. At the time of her guilty plea, she was ordered to undergo an addictions assessment and seek counselling. She says a parole officer concluded she did not need to get help and the conditions were dropped.

It is unlikely Ottawa will lose interest in the couple anytime soon. Tim Powers, a Conservative insider, describes Sen. Zimmer and Sensenberger as “lead actors in some oddball reality show. The senator and his bride seem to be both inviting and embracing the curiosity that some have about their union. It almost looks like they want to nurture some sort of celebrity.”

For his part, Sen. Zimmer seems delighted about the next phase in his marriage, saying in an email to Maclean’s: “Stay tuned & keep ur seat belt on!!”

He added that he is very proud of his wife: “It brings tears to my eyes.” 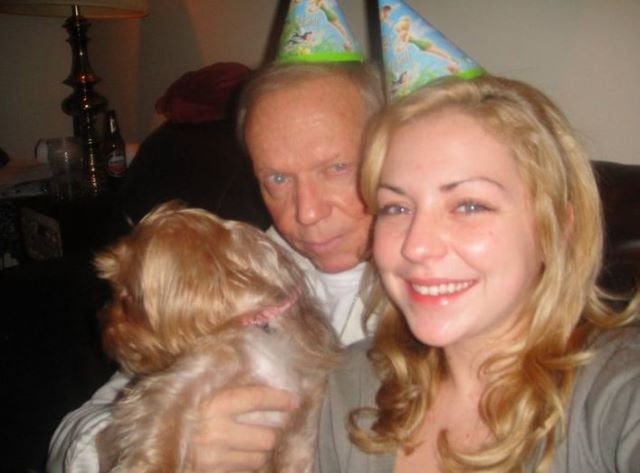 Sensenburger, Zimmer and their dog Tinkerbell