The plan to save Canada's rapidly-melting Arctic ice 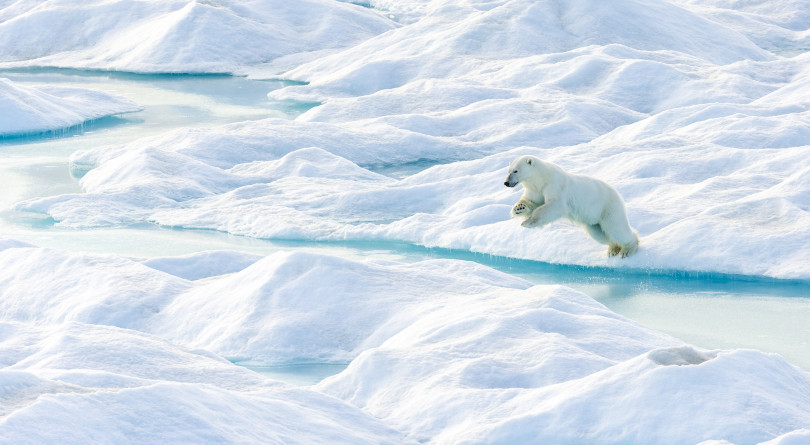 Nunavut’s ﬁrst premier is, by his own admission, not a talented hunter. But Paul Okalik, who’s now speaking about Arctic issues for WWF-Canada, recalls with awe his last trip out to the sea ice near Grise Fiord, on the south side of Ellesmere Island in Canada’s Far North.

WWF-Canada was the ﬁrst to call the vast frozen expanse that covers much of that region the Last Ice Area—the thickest, most stubborn multi-year pack ice that’s expected to serve as a ﬁnal refuge for High Arctic wildlife. On that summertime trip many years ago, Okalik failed to bag a seal he had in his sights, but the memory that sticks is that of pure solitude in the midst of 24-hour daylight.

“You can’t tell time. You’re the only human, pretty much, at times. You are in such a tranquil and quiet environment, all you hear is nature,” says Okalik. “You’re relaxing, and you’re waiting for a seal to come your way.” He reflects on his experience with a chuckle. “I missed. What can you do?”

Inuit have a name—Tuvaijuittuq, an Inuktitut word meaning “the place where the ice never melts”—for the region that stretches north of the 85th parallel, past the remote military base at Alert, to the edge of Canada’s maritime boundary. Tuvaijuittuq’s fate lies largely in the hands of climate change, which is melting Arctic ice at an alarming pace that’s often hard to predict.

READ: How climate change is destroying the Arctic

But those who live nearest to the melt, led by the Qikiqtani Inuit Association (QIA), aren’t waiting for the rest of the world to turn down the global temperature. QIA, which represents Inuit in the region, has a plan to protect the ice and secure food sovereignty for several far-flung communities in eastern and northern Nunavut. And its leaders have been diligently persuading politicians in Ottawa to secure more than $250 million to make it happen.

On Aug. 1, the feds—alongside gleeful QIA ofﬁcials—bought into the Inuit plan. How, in the face of rising temperatures controlled by neither Ottawa nor Inuit, can they hope to save the ice? They’re starting with a ministerial order to freeze human development in Tuvaijuittuq for ﬁve years. The area is remote enough that there’s no current ship trafﬁc or oil and gas activity, but this prevents any seismic testing or well-drilling that could weaken the ice. As part of a beneﬁts agreement related to an adjacent national marine conservation area in the High Arctic named Tallurutiup Imanga, the federal government will fund full-time hunters and build small-craft harbours, as well as food-processing facilities, in ﬁve Inuit communities that touch Tallurutiup Imanga.

P.J. Akeeagok, QIA’s president, hails the beneﬁts agreement and the government’s commitment to protect the ice as a global model for conservation—and a blueprint that Inuit have had at their ﬁngertips for decades, waiting for a government that would listen.

The ﬁnal boundaries of the Tallurutiup Imanga conservation area emerged from seven years of consultation and incorporated traditional knowledge of hunting routes and habitat of wildlife, including narwhals and polar bears, that depend on the ice. “It’s since the ’50s and ’60s when Inuit really started to mobilize,” says Akeeagok. “It gives you an appreciation for how patient Inuit are.”

Now they’re playing a crucial role in their own sustainability, he adds. (Akeeagok, himself, caught Arctic char the day he spoke to Maclean’s.) The federally funded hunters and harvesters—Nauttiqsuqtiit, or “guardians”—will both put food on tables in their communities and serve as the eyes and ears of climate change in remote areas. They’ll also participate in search-and-rescue operations. “To be able to create such meaningful jobs is truly a game-changer,” says Akeeagok. “Kids will be able to look up to the Nauttiqsuqtiit.”

Few Canadians, or anyone else for that matter, ever see Tuvaijuittuq. Most who do are military personnel posted to CFS Alert for six-month stints. Sgt. Mike Drouillard, who arrived in February and handles the station’s incoming supply shipments, says the 24-hour darkness, followed by constant sunlight, took some psychological adjustment. But, he remarks, “the weather is quite consistent up here.”

Indeed, Environment and Climate Change Canada measured temperatures fluctuating only a few degrees each day in much of June and July. But only two days after Drouillard spoke, Alert hit 21 C—warmer on July 14 than balmy Victoria, 4,200 kilometres to the south. Temperatures remained in the teens for days.

Heat waves bode ill for the place where the ice never melts. Alek Petty, a NASA scientist at the University of Maryland who monitors Arctic sea ice, says it’s hard to predict the rate of change, and observers are still developing reliable models to project the future of the hardiest ice shelves. Still, the trend for the Arctic is clear: even if some years are icier than others, the planet is warming, sea levels are rising, and there’s less of the frozen stuff.

Akeeagok acknowledges the science, but refuses to lament what might be inevitable. He’s too busy protecting his people’s ability to live within their means and proving to the world there’s a better way to treat the planet. To him, the future of the sea and whatever comes next for his people are one and the same. “This is just the next chapter in our story,” Akeeagok says. “It feels like the exercise of nation-building is ﬁnally reaching to the North.”