Census 2016: A picture of a bigger, more urban Canada 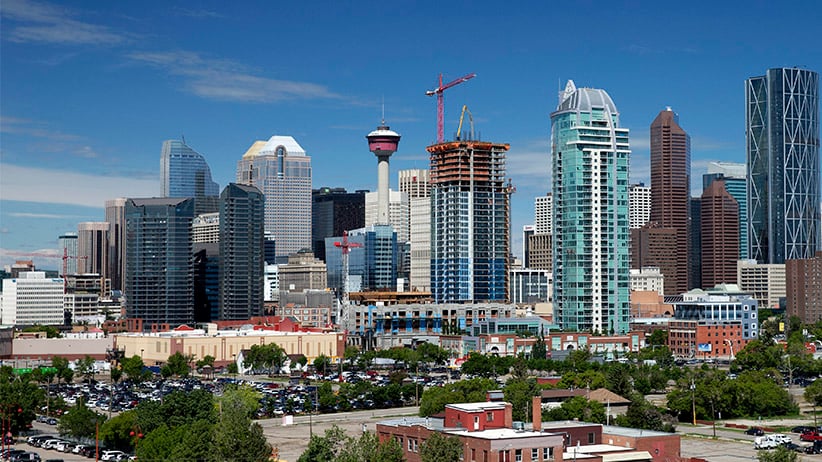 Construction cranes at work in the downtown area of Calgary, Alberta on June 20, 2014. (Larry MacDougal/CP)

On Wednesday, Statistics Canada released the country’s latest family portrait, with the first instalment of the 2016 census data. From amid a dizzying array of figures on the country’s population and the dwellings we live in, Maclean’s selected a few key storylines and asked David Gordon, director of the school of urban and regional planning at Queen’s University, to unpack what it all means.

There are more big cities, and they’re getting bigger than ever before

Canada now has 35 census metropolitan areas (a collection of municipalities surrounding an urban core, with at least 100,000 people living in the whole area and 50,000 in the urban core), up from 33 in 2011. According to StatsCan, “The three largest CMAs in 2016—Toronto, Montréal and Vancouver—were home to more than one-third of all Canadians (35.5 per cent), with a combined population of 12.5 million.” Montréal, for one, ticked past the four million population mark for the first time in history.

Gordon: “The big got bigger, and the largest cities—Toronto, Montreal and Vancouver—are also the principal immigrant reception areas. So to the extent that Canada’s population is growing mainly because of immigration and the immigration first point of landing is those three major metropolitan areas, it means their growth is robust and it depends a great deal on the ability to accept new immigrants. Canada’s population is not growing at what the demographers call replacement rate, so if it wasn’t for immigration, our population would be shrinking.”

Even when the cities are smaller, it’s still all about urbanization

Thirteen of Canada’s 25 fastest-growing municipalities outside of CMAs were in census agglomerations (municipalities centred around an urban core of at least 10,000 people; CAs are basically large towns and smaller cities).  It’s all about urbanization, the statistical agency says.

Gordon: “Young people typically move into the downtowns of cities, and even young families, before their kids are school-age. We’re watching very closely whether the Millennial generation will do things differently, and not only are they living downtown—the baby boomers lived downtown at first, but then when they had kids, they moved out to the suburbs in massive numbers—the Millennial generation, it looks like more of them are starting to have kids in the downtown.”

Calgary, at 1.39 million people, leap-frogged Ottawa-Gatineau’s 1.32 million residents to officially become Canada’s fourth-largest city. The list of fastest-growing large cities tells a story of swift growth in the west, though that’s likely slowed a little due to tumbling oil prices since the census on May 10, 2016. StatsCan says, “From 2011 to 2016, the population grew the fastest in five CMAs located in the Prairie provinces: Calgary (+14.6 per cent), Edmonton (+13.9 per cent), Saskatoon (+12.5 per cent), Regina (+11.8 per cent) and Lethbridge (+10.8 per cent).”

Gordon: “Calgary is a resources boom. It’s the headquarters of the resource companies. We have Canadian corporate headquarters moved to Calgary, so it’s not just the exploration, but it’s the management of these firms there. They’re diversifying as fast as they can as well, where they have universities and health centres and clinics.

Ottawa-Gatineau is a slow and steady growing metropolitan area. It’s never busted, but it doesn’t boom as sharply as Calgary does. Even the collapse of the high-tech industry a few years ago wasn’t enough to cause Ottawa’s population to contract. My research indicates that the public service component of Ottawa’s economy is counter-cyclical somewhat to the high-tech industry. So when the pink slips and running shoes are being handed out by the new prime minister, that’s often a boom time for the high-tech industry.”

But municipalities far from large cities are struggling

StatsCan counts 723 Canadian municipalities of at least 5,000 people. One in four of those (23 per cent) saw their populations fall between 2011 and 2016—but that breaks down very unevenly when you consider their location and proximity to bigger neighbours. Only 11 per cent of municipalities located within CMAs saw their populations dwindle, while 45 per cent of those stranded outside a CMA or CA experienced net population loss.

Gordon: “It’s really hard to be a small city that is some distance from a major metropolitan area. If the one or two things that are central to your economy go into decline—such as Elliott Lake’s uranium mining—then those municipalities have a hard time continuing to grow, let along not shrink.”

What StatsCan calls “peripheral municipalities”—those that surround urban cores—are growing faster, at 6.9 per cent, than the central cities they orbit, which grew by 5.8 per cent between 2011 and 2016. “This confirms the popular belief as well as previous findings that the urban spread phenomenon is occurring and/or is continuing,” the statistical agency says. “For many decades, peripheral municipalities have been growing at a higher rate than central municipalities, in Canada and elsewhere.” Some of that growth is positively explosive, as is the case with Warman, near Saskatoon, and with Cochran and Airdrie, on the outskirts of Calgary; all grew eight times faster than the national average over the last five years.

Gordon: “People love their single detached homes. People love to drive downtown quickly on an uncongested freeway. This is a type of development that is still the dream for most Canadian families. This is a very powerful urge and we have to find ways that you can have some of the benefits of it without the sprawl. And secondly, we have to make the costs of it unsubsidized. And thirdly, we have to make our suburban developments more sustainable, more compact, better designed.

So there are all kinds of challenges. But there’s no doubt that two-thirds of Canadians live in suburbs and it’s not going to change quickly.”