Tories have moved on from the gay marriage debate. Almost.

In the race to become the next Conservative Party leader, two contenders oppose gay marriage. It's not good for the brand. 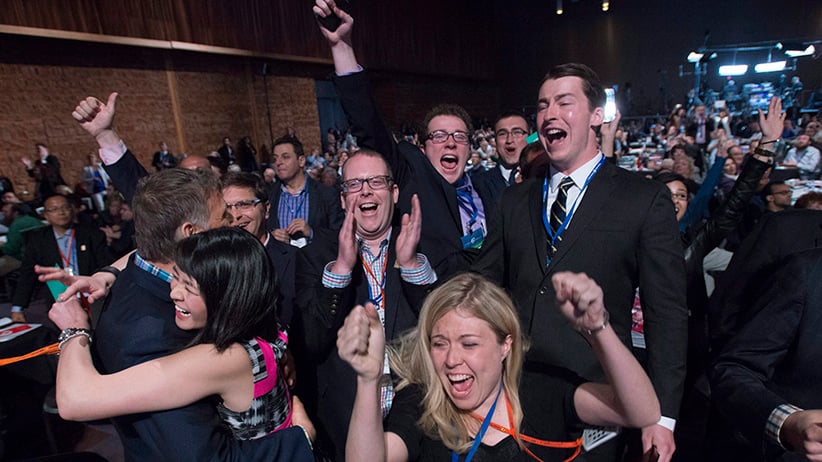 Delegates Michelle Rempel and Natalie Pon celebrate the yes vote to change the wording of the traditional definition of marriage in the conservative policies at the Conservative Party of Canada convention in Vancouver, Saturday, May 28, 2016. (JONATHAN HAYWARD/CP)

One of the more damning indictments of social conservatism in this country came at the hands—or, more precisely, the eyeballs—of Conservative MP Michelle Rempel. At last May’s Conservative convention, the 36-year-old Rempel helped spearhead a motion striking down the party’s definition of marriage as between one man and one woman. Gay marriage has been legal in Canada since 2005, and Rempel was suitably thrilled at the news that the Conservative Party of Canada was going to acknowledge as much some 11 years later.

“I’ve never been more proud of our party,” she said during a media scrum. “I think I’ll look back at this moment in my political career and my life as something that was really transformative and really awesome.”

Standing next to her was Brad Trost, a fellow Conservative MP from Saskatchewan. Trost is a staple of the party’s social conservative ranks, and his five-minute spiel for the cameras is required watching only as a majesty of self-martyrdom and bitterness wrapped in dime-store smarm. “Traditional marriage is the bedrock of society. You can’t have a free enterprise society without it,” he said. “In the next election, I will say that homosexual marriage, gay marriage, is wrong. I’ll be public about it.”

About two minutes in, around where Trost suggests allowing gay marriage will foment rampant socialism throughout Canadian society, Rempel looks at Trost like he was a bad smell. Her ensuing eye roll was probably captured on the recorders of the assembled journalists. A minute later, with Trost in mid-sentence, she turns and walks away.

There is so much in Rempel’s reaction: evident disdain, for one, but exasperation, embarrassment and hurt, too. And, maybe, worry. Because Trost isn’t just some perpetually aggrieved back bencher—though he’s that as well. At the convention, he threatened to run for the leadership of the Conservative party. On Aug. 16, he made good on those threats by declaring himself the sixth candidate to succeed Stephen Harper.

Again, it’s tempting to dismiss Trost’s leadership campaign as a last-gasp oddity fuelled more by hubris than political conviction. But while he may be the most vocal social conservative candidate, he certainly isn’t the only one.

Former Ontario MP Pierre Lemieux also recently declared his candidacy. Lemieux is almost as quotable as his Saskatchewan brethren. In 2006, he concluded his defence of “traditional” marriage in Parliament by asking God “to guide us in our efforts to defend the holy sacrament of marriage as the union between a man and a woman.” (Apparently, God had long given up on Parliament, since same-sex marriage had been the rule of law for over a year by then.)

Granted, neither of these men is particularly electable, by Conservative party members or the Canadian electorate. But their presence in the race, and the oxygen their sideshow candidacies consume, will serve as a reminder to voters that the party remains tethered to its social conservative beginnings.

The percentage of voters between the ages of 18 to 25 increased by 12 percentage points in the 2015 election, according to Statistics Canada data. About 20 per cent of that vote went to the Conservatives, according to an Abacus Data report. More than double, 45 per cent, went to the Liberals. Most Conservatives, interim leader Rona Ambrose and Rempel very much included, know one of the keys to defeating the Liberals is to shed the Conservative image as the party of old, intransigent white guys.

The likes of Trost and Lemieux are living, breathing repudiations of this change. Harper, no fan of same-sex marriage, at least had the good sense to ignore his own party’s doctrine on the subject. Trost and Lemieux want a return to and an enforcement of that doctrine. Against all odds and common sense, not to mention common decency, they will fight their own party’s motion to acknowledge what is already written law. Marketers call this brand pollution. Political scientists might call it suicide.

Lest anyone think we are dealing with an abstract issue, it’s worth taking note of another presence in that scrum. Standing to Trost’s right was author and Globe and Mail columnist John Ibbitson. As the Globe’s Washington correspondent in the twilight of the George W. Bush years, Ibbitson chronicled social conservatism’s caustic effect on the Republican Party.

Last April, he wrote a series of articles about the rank discrimination against gay public sector workers by the federal government as recently as the early ’90s. These articles show the dangers of institutional intolerance, particularly when coupled with the state’s levers of power.

Ibbitson is one of the better journalists in the country. He is also gay. If Trost had his way, the federal government would have prohibited Ibbitson from marrying his partner of 13 years, which he did in 2009. In that scrum, as Trost spouted off his gay-baiting nonsense, Ibbitson calmly took notes and asked questions. I’m not sure how he managed.