Half-capacity classrooms, hand-washing stations, sparse playgrounds. B.C’s resumption of classes has given the rest of the country a chance to see how schools may function in the age of COVID-19. 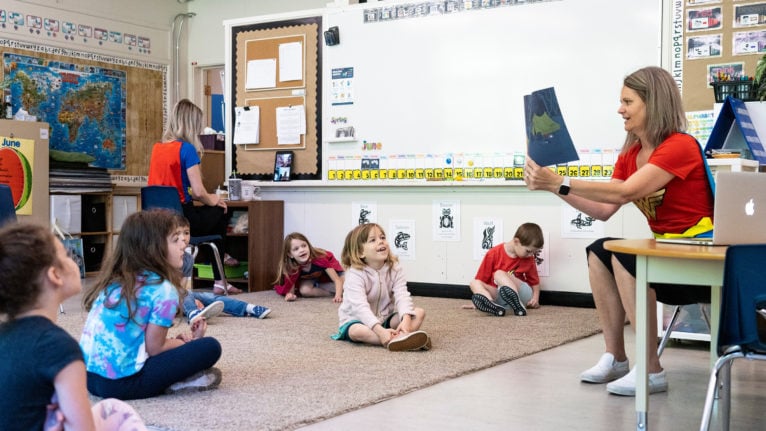 Mey and her students (Photograph by Jimmy Jeong)

Even at one-third its normal size, Nicky Mey’s Grade 1 class still hums and clamours with the sound of seven pairs of scampering feet and squealing laughter that bounces off the walls of the busy classroom.

This might be just another Thursday in June for other attendees of North Vancouver’s Eastview Elementary, but it’s Superhero Day for these children, who’ve bravely accepted the invitation to appear in class. It’s been three weeks since British Columbia reopened classrooms to all students for Stage 3 of its school restart plan. Spread safely throughout the room, first-graders sport shirts emblazoned with the symbols of beloved comic book characters—from Spider-Man to The Flash—while spinning tops, discussing their favourite fruit snacks and doodling on twin whiteboards at opposite ends of the room.

Their teacher greets them at the door in a Wonder Woman T-shirt beneath a short blue cape. “Toward the end of the school year, we try to infuse a little bit of fun,” explains Mey, who is also Eastview’s vice-principal.

Fun is no small feat since COVID-19 derailed grade school throughout B.C. and across the country. Three months earlier, Premier John Horgan announced the suspension of kindergarten through Grade 12 classes to help curb the highly communicable and potentially deadly disease. Most provinces decided over the following weeks to hold the bell for the rest of the school year. Quebec struggled with its own restart in May, when several dozen staff and students tested positive for the illness shortly after some schools reopened. But B.C., having controlled its curve with relative success, forged on with its reopening, providing a large-scale, real-world trial that was closely watched by provinces considering start-up models for September.

According to the B.C. Ministry of Education, more than 157,000 K-12 students—about a third of the province’s grade schoolers—returned to class in the first week of June under new health and safety guidelines. Eastview was fairly typical, principal Rick Chan says, with about 90 of the school’s 280-odd students attending on any given day. As of mid-June, the school had no confirmed cases of COVID-19. 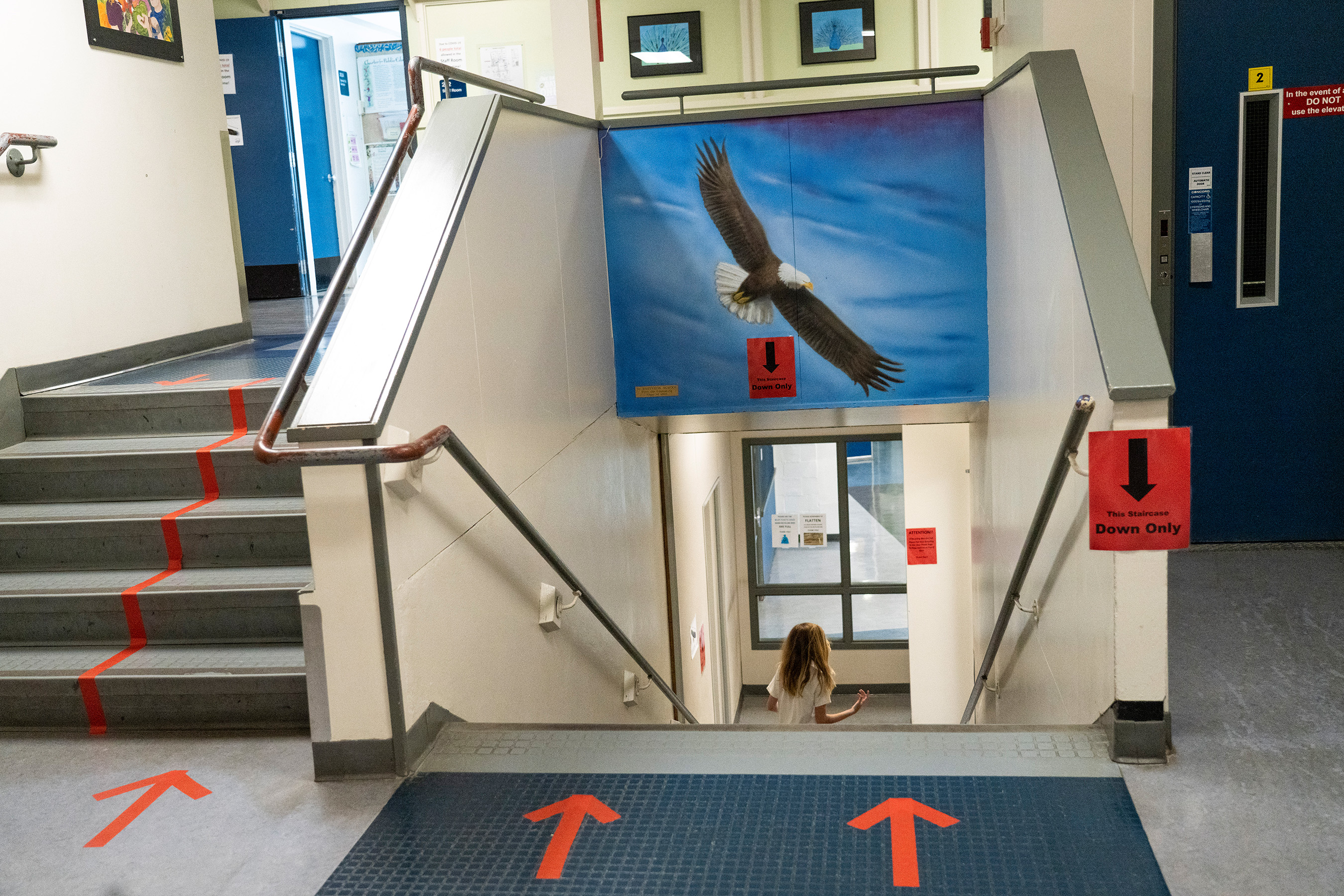 This is not school as the kids knew it when they left in March. By the 8:41 a.m. warning bell, attendees are keenly queueing up at designated outdoor meeting spots. Eastview’s emblematic eagle now serves as a mnemonic tool for safe social distancing, reminding kids to maintain an eagle’s wingspan from others. “We like to say, ‘Lets give everybody a space to soar,’ ” says Chan. “It’s a positive way to frame the idea of giving one another space.”

As children file indoors, teachers direct them to hand-washing stations for regular hygiene exercises that bookend not just school days but recess and lunch—breaks staggered though the day to limit outdoor interaction. Face masks aren’t mandatory; on this day, neither staff nor students are seen wearing them. But everyone follows arrows taped to floors that direct traffic back and forth, keeping them on opposite sides of hallways. Entryways are left open to minimize contact with doorknobs.

While social distancing is easier for older students, Chan notes, the goal for free-spirited younger ones is to limit physical contact. Rather than sharing supplies such as scissors and markers, they’re assigned their own.

READ: The COVID-19 pandemic is remapping childhood—and the effects may linger

At about 9:30 a.m., Mey’s students sit attentively at markers spread out on the carpet before her, focused on their teacher, who has selected an illustrated read for storytime: Even Superheroes Have Bad Days. “When superheroes don’t get their way, when they’re sad, when they’re mad, and they have a bad day, they could use their superpowers to kick, punch and pound,” Mey reads. “They could shriek, they could screech with an ear-piercing sound.”

Before turning each page, she twists to hold up the book for several students visible on a laptop behind her, streaming storytime through their computers at home. With the province limiting school density for K-5 students to 50 per cent, Eastview runs a rotation to ensure no more than half the class is present on a given day. But families looking to keep their kids current are invited to tune into daily video conferences that follow weekly lesson plans shared online.

None of the superheroes in Mey’s group seems prone to tantrums, or punching or kicking, even at recess. Rather than playing tag or football, students opt for calmer, role-playing games conducted in loose circles on the grass. Playgrounds are sparsely occupied, and mainstays such as slides and monkey bars are barely touched. One boy sets off by himself to blow bubbles in a field.

There is a fair bit of shrieking, however, when Mey invites the class to invent names for their self-styled alter egos, especially when one boy at home announces his through the laptop speaker. “Captain Underpants!” he cries, before clarifying that he’s chosen the name because he is indeed wearing underpants. Even at home, students dress for success.

“Yes, you are,” Mey says approvingly. “Of course you are.”

This article appears in print in the August 2020 issue of Maclean’s magazine with the headline, “Return to school daze.” Subscribe to the monthly print magazine here.