The home of the Klondike gold flush

After a judge forced historic Dawson City to fix its raw-sewage problem, the never-ending quest to build a system that works—and doesn't bankrupt the place—has even Yukon's premier saying 'WTF' 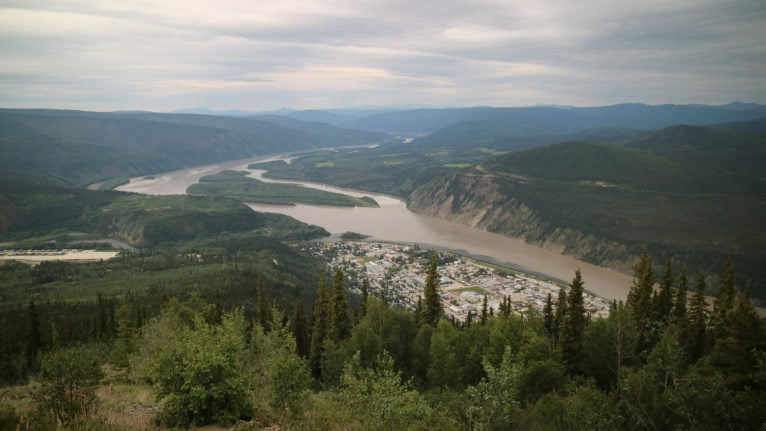 Dawson City, by the Yukon and Klondike rivers, has struggled to build a proper wastewater plant (Agnesstreet/iStock)

For decades, Dawson City was notorious among Canada’s poorest performers on sewage treatment. Like Victoria and some East Coast cities, the historic Yukon town pumped raw sewage into the nearest major water body. A federal search warrant and raid in 2000 found that tested water, screened only for big “lumps” before hitting the Yukon River, was potentially toxic to fish. The town pleaded guilty to a subsequent Fisheries Act charge, for which the fine was up to $1 million.

Heino Lilles, the Yukon territorial chief justice, decided against penalizing the town by forcing it to cut a big cheque. Instead, he ordered Dawson to build a proper waste­water plant, the sort federal authorities had long urged, and the town itself had studied. A substantial fine, Lilles wrote in his decision, might “reduce its ability to construct the sewage treatment plant, something that would be contrary to the public interest.”

That nifty bit of sentencing came down in 2003. Little did the justice know had he effectively sentenced Dawson City to a multi-decade, multi-million-dollar-and-always-rising fiasco of a project, which now has a targeted fix date of 2026, nearly a generation after Lilles thought he’d devised a tidy solution that benefitted all parties, including the river’s Arctic grayling and chinook salmon.

The complications began around the time of the sentencing, when planners concluded the proposed sewage treatment plant would cost several times the initial estimate. Lilles’s judgment required the facility be completed by September 2004, but he granted the first of many extensions when Dawson said it was back to the drawing board. To confuse matters further, the territorial government removed Dawson’s mayor and council in 2004 after multiple ambitious projects helped tip the municipality into bankruptcy.

Thus did the fabled Klondike town—better known for its Gold Rush history and a cocktail featuring a pickled toe in it than for infrastructure politics—become a dull case study in complex wastewater challenges. In tourist-friendly summer, the population of toilet flushers and laundry detergent users roughly doubles, while in winter months the 1,375 year-round residents use town-provided “bleeder” systems that constantly circulate extra water through their household pipes to prevent freezing, producing lighter but still steady sewage outflow. A solution seemed possible, but Wayne Potoroka, the town’s current mayor, says the unorthodox court order created undue pressure to figure things out quickly. “It’s like capital planning with a gun to your temple,” he says.

A plan devised while Dawson was under territory-directed trusteeship called for a big sewage lagoon, the conventional option in Canada’s North. In 2008, planners got the court-ordered deadline for the sewage project completion pushed back again, to 2011. But then, a month later, residents voted overwhelmingly in a referendum to block the $17-million lagoon from being completed at a site near the entrance to town. Forced back to square one, with the clock ticking, the Yukon government inked a deal with Vancouver-based Corix Water Systems to build a mechanical treatment plant in town, at an estimated cost of $24.8 million.

Project managers would need—surprise, surprise—another deadline extension from Lilles. The long, unpredictable winters around the 64th parallel had snarled up construction, as did a very Dawson-specific problem: during excavation for the plant, crews dug up the skeletal remains of four Gold Rush-era criminals, each sentenced to execution by the North West Mounted Police more than a century earlier for murdering prospectors.

With the makeshift rogues’ cemetery dug up, crews finally built the plant and, $34.3 million later, met a yet-again-extended deadline, beginning sewage treatment in 2012. Within a couple years, though, problems arose: first, the proposed $340,000 per year to operate the plant actually turned out to be $950,000—an eye-popping amount compared to the roughly $150,000 per year it cost to run the sewage lagoon in Whitehorse, a city nearly 20 times larger. The Yukon government has agreed to pick up more than three-quarters of the Dawson plant’s operating tab, lest it tilt the town toward bankruptcy again. Potoroka caustically refers to the plant’s “deep-shaft” mechanical system as “the most appropriately named technology of all time.” For all the extra cost, they weren’t even getting a sewage system that worked properly: it failed early effluent quality tests both in summer and winter.

In 2016, a Yukon Liberal government was elected, after 14 years of the Yukon Party presiding over the territory and Dawson’s sludgy woes. Community Services Minister John Streicker, an engineer by training, was intrigued, then disheartened, by his first briefings on the debacle. He started calling this taxpayer sinkhole the “wastewater treatment facility” because, as he put it to Maclean’s, “I thought that was the best acronym that could be applied—WTF.” (Premier Sandy Silver, the MLA for Dawson, also used that term.) In 2017, the government sued Corix for $27 million after long-running attempts to get the plant working properly failed. The two sides settled this past February; Corix declined to comment for this story, citing non-disclosure clauses in the settlement.

But in the intervening years, two breakthroughs occurred: a series of upgrades finally helped the plant treat sewage well enough to pass quality tests; then, in 2019, the Yukon government decided to cut its losses and pursue a replacement for Dawson’s money-gobbling “WTF.”

Once again, the territory and town reckon a sewage lagoon is the sensible, affordable way to go—if they can only agree on a location. Streicker, the minister, says it’s highly possible they get the project done before the 2026 target date; Potoroka, the mayor, worries that Dawson City’s history with infrastructure deadlines does not foretell success.

This article appears in print in the October 2020 issue of Maclean’s magazine with the headline, “The Klondike gold flush.” Subscribe to the monthly print magazine here.