Enough with the Uber bashing already

Our editorial: Uber is giving the taxi industry the shakeup it deserved. Arguments against it are grounded in turf protection. 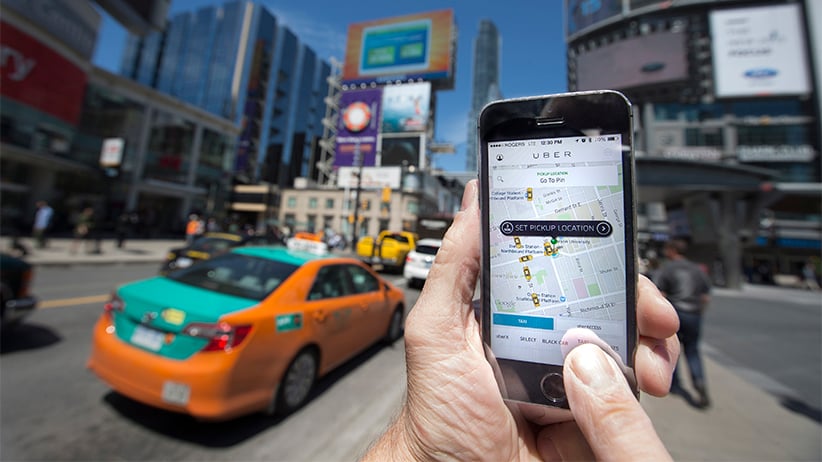 Once upon a time, Naheed Nenshi would have been told he was on Candid Camera; now it’s Periscope. To his chagrin, the Calgary mayor was caught last week on a hidden live-stream camera letting fly his private thoughts on Uber, the ride-sharing app that’s shaking up the taxi business.

“Uber . . . has a brilliant business model, and are dicks,” Nenshi declared as he was being ferried around Boston by a driver for Lyft, a service similar to Uber. He also claimed Uber let registered sex offenders and violent criminals slip through its driver-background checks. Nenshi later offered up an earnest-sounding apology, and recanted his unfounded allegations about Uber’s background checks. For someone who’s used social media to great advantage and now finds himself hoisted upon his own digital petard, it’s a moment of considerable irony. More significant, Nenshi’s comments provide valuable insight into the positions and prejudices that define the heated battle over municipal regulation, consumer rights and the future of taxis in Canada.

The traditional taxi business is a creature of municipal command and control. City regulators set the number of taxis allowed to roam their streets, determine the vehicles drivers may use, the prices they charge and how they interact with customers. Taxes, fees and other requirements abound; competition is a foreign concept. By strictly limiting the availability of taxi licences, this system has also made some taxi licence owners (although not necessarily drivers themselves) very rich.

Uber upends this cozy relationship by flooding streets with eager drivers who connect to passengers through smartphones in a way that largely eliminates municipal oversight. This has caused taxi licence prices to plummet, and taxi drivers everywhere to protest. Despite all the sound and fury however, ride-sharing apps offer tremendous advantages for consumers. According to the federal Competition Bureau, Uber fares are generally lower than taxis. (Although rates can rise during peak demand.) Wait times are shorter. Convenience and quality of service are also notably better. The Competition Bureau recommends cities adopt a “light” regulatory approach with Uber to allow “market forces and competition to determine outcomes and drive innovation.”

Unfortunately not all cities respect the bureau’s advice to favour consumers over the taxi industry. Vancouver has banned Uber. Montreal is engaged in a fierce battle of car seizures and fines with Uber drivers. Nenshi chose a passive-aggressive approach, creating a set of regulations he knew would conflict with Uber’s “brilliant business model” in order to keep the service out of Calgary.

Civic hostility toward Uber is often justified in the name of passenger safety. Nenshi’s falsehood about sex offenders is a fine example of fact-free fear-mongering over background checks. In truth, the wealth of data exchanged when arranging an Uber ride, including a mutual rating system, as well as the absence of cash changing hands, offers ample protection for passengers and drivers alike. Another refuge for taxi patriots is the claim Uber threatens the livelihood of hard-working immigrants. Again, Nenshi’s own live-streamed experience puts paid to this allegation. His Boston driver told him he makes a satisfying US$40 an hour driving full time for Uber and Lyft. Presumably such returns are possible for any taxi driver with similar dedication. (It seems reasonable to ask why Nenshi, who deliberately engineered Uber’s departure from his own city, patronizes similar services when travelling abroad. Perhaps he finds them safe, convenient and well-priced?)

The arguments arrayed against Uber are grounded not in consumer protection, but turf protection. Regulators instinctively resist any erosion of their powers, even in cities that pride themselves on their progressive or high-tech bona fides. This likely explains why Uber has been such a “prickly” negotiator, to paraphrase Nenshi’s colourful descriptor. Given the deeply entrenched positions of its opponents in the taxi industry and municipal offices, Uber is pushy out of necessity. The obstacles are too great to be polite.

Thankfully, not every city has set out to stifle Uber. After initially cracking down on Uber, Ottawa recently unveiled a new set of policies entirely compatible with ride-sharing. Significantly, these rules also untangle the web of red tape choking taxi drivers, giving them a real chance to compete. Licence fees will be cut dramatically and regulations on such things as trunk size, window tinting and credit card fees will be dropped. That’s right: until Uber arrived, Ottawa imposed a $1.50 fee on every taxi passenger paying by credit card. Why? Because it could. Surely this is proof enough of the necessity for Uber’s disruptive presence.

In his unguarded, live-streamed moments, even Nenshi seems to acknowledge the inevitability of an Uber-led shakeup of the Canadian taxi business. “We’ll get there eventually,” he told his Boston driver. “It’s all going to sort itself out.” And so we wait for Nenshi and the rest of Canada’s regulation-obsessed civic leaders to decide when they’ll finally be ready to put the interests of consumers first.