Fear and anger on the frontlines: What happens if there aren't enough masks? 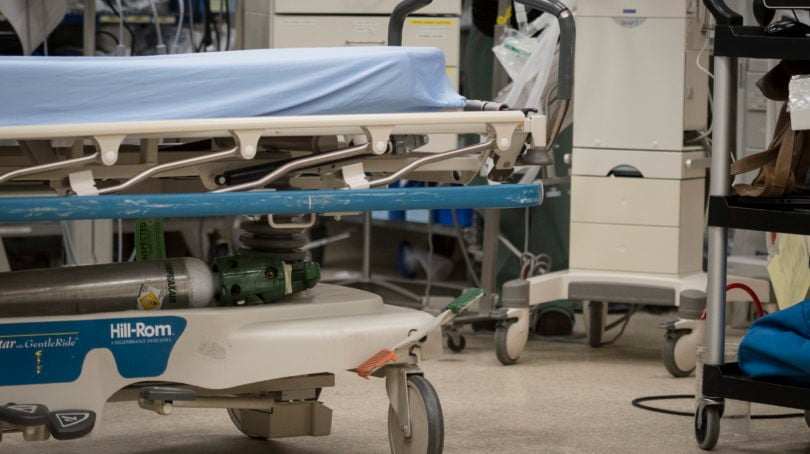 The trauma bay is photographed during simulation training at St. Michael's Hospital in Toronto on Aug. 13, 2019 (CP/ Tijana Martin)

Frightened and angry doctors are talking frankly about walking off the job if they don’t have the proper protective equipment to treat coronavirus patients without risking infecting themselves.

As officials brace for a fresh wave of COVID-19 patients entering hospitals this week and hospitals ration face masks, doctors are having blunt conversations.

“The stories that are coming out of hospitals are pretty dire,” said Ottawa general practitioner Britt Harrison in a telephone interview. “People are threatening to stop working because they don’t have appropriate mask coverage. And you’ve seen what has happened in Italy.”

On Friday the Italian association representing doctors announced that 51 Italian doctors have lost their lives fighting the disease, among an estimated 6,414 health workers who have been infected globally.

Last week, Montreal’s public health officer announced that 31 health workers in Montreal have contracted the disease. After an outbreak at a nursing home in Bobcaygeon, Ont., 24 staff members have tested positive.

Canadian health workers know that as they brace for a larger wave of patients in emergency rooms across Canada, they face real peril. They are updating their wills, discussing end-of-life care with family members and isolating themselves from loved ones to avoid bringing the disease home.

READ MORE: What does the COVID-19 endgame look like? Five simple steps.

“I’m a little apprehensive about every shift,” said an Ontario emergency room doctor who spoke on condition of anonymity because her hospital has asked doctors not to speak to the media. “Am I going to contract this? Am I going to make an error in my personal protective equipment? I’m not personally worried about not having it because the moment I feel I don’t have personal protective equipment I’m going to walk out.”

Melissa Forbes Flint, an anesthesiologist at Almonte General Hospital, is mentally preparing herself for the high-risk intubation of coronavirus patients, which produces clouds of infectious particles.

“I am fully prepared to refuse work that puts me directly in harm’s way,” she said in a telephone interview on Monday. “I am thoroughly prepared to intubate COVID patients and be on the front line. I am 100 per cent ready to do that, and I will do that, but I expect that my province and my country will provide gear that is most recommended in order to prevent me from getting ill.”

Melissa Forbes Flint, an anesthesiologist from Almonte, Ont., is ready to intubate coronavirus patients, but is prepared to walk if she doesn’t have proper gear (Photo from her Facebook page)

In messages in doctors-only private Facebook groups shared with Maclean’s, doctors discuss the possibility of refusing to work if they don’t have the right gear. They are angry and frightened. They describe conflicts within teams over the distribution of scarce masks. They are suspicious of the advice they are getting from public health authorities.

The authority that oversees Hamilton’s hospitals, for instance, sent out a notice on Friday asking all staff to wear masks until they are “grossly soiled or wet.”

The main problem is a shortage of N95 masks, which filter for particles more effectively than simple surgical masks. Many N95s are produced in China, where demand has been skyrocketing and where factories have been forced to shut down. Canadian stockpiles were allowed to expire.

Hospitals are keeping masks locked up. Desperate doctors are ordering masks online for their personal use.

Canadian hospital administrators are afraid there may not be enough to go around if Canadian cases mount at the same rate as they have in other countries, and so they are restricting them, directing health-care workers to use them in only the riskiest situations, such as intubations, when patients are put on ventilators.

“If you have a problem with the moral argument of refusing to intubate without an N95, let the math convince you,” said one doctor in a Facebook group.

And doctors who have reviewed the best scientific evidence are not convinced that it is actually safe to even do supposedly low risk interactions with patients in surgical masks. At least one health authority is asking surgeons to operate without N95s, although other authorities believe that aerosol transmission is a risk in surgeries.

And health care workers can see pictures from China, where doctors are constantly wearing full protective suits. Canadian doctors don’t have that option.

“Truthfully, given this is a new strain of virus it’s hard to know if only surgical masks are enough,” said one doctor in an email. “It’s hard to go to work in a situation where you are constantly wondering, is this surgical mask truly protecting me? my family? my next patient? A lot of health-care workers believe they should be wearing an N95 mask at all times while at work these days because we have a right to the safest possible work environment.”

Some doubt that officials really know the virus well enough.

“We have been researching the flu for over 100 years now and epidemiologists still can’t decide whether it is airborne or whether it is spread by droplets,” said Forbes Flint. “So I don’t know how they could decide in three months that something that is brand new that we’ve never seen before is airborne or is droplets.”

Dr. Sandy Buchman, president of the Canadian Medical Association, says asking health-care workers to work without proper protective equipment is like asking firefighters to enter a burning building without the right gear. “I think physicians have obligations but they also have rights and society has a responsibility,” he said in a telephone interview.

He said if they are not provided with the equipment they need, they can’t be blamed if they refuse to work.

“I already informed the minister herself today that I have heard from nurses that unless they get necessary personal protection equipment … they also have families. This is not about them. This is about leaving their families without a mother or a father.”

Health care workers are upset with administrators and government officials who are not communicating in detail about the quantities of equipment on hand and efforts to obtain more, as, for instance, New York Governor Andrew Cuomo does in his daily briefings.

“I do know that governments should be providing us with real time information, right up to the moment,” said Buchman. “And we don’t have that.”

Grinspun says officials in Ontario have still not ordered enough equipment. “Nice words is not good enough,” she said. “We need now actions to procure. It is a matter of dollars. You know the core of the problem? All along they have underestimated where this is going.”