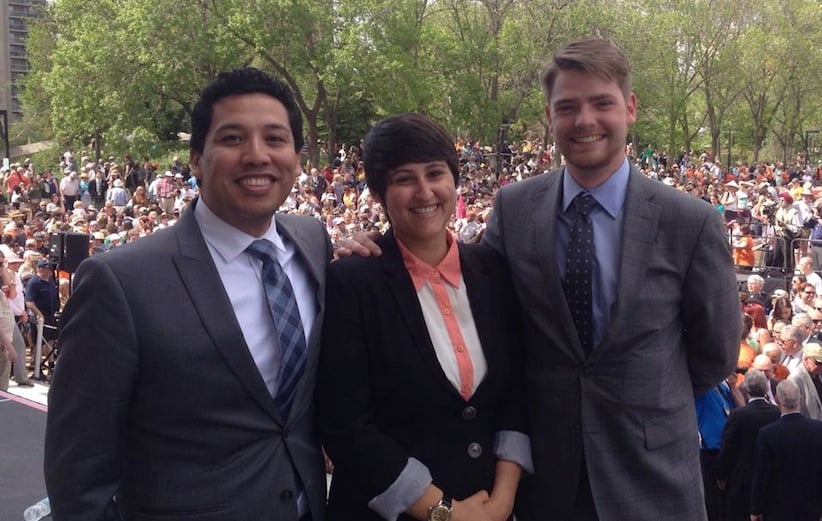 The Alberta legislature has lately become a place for remarkable confessionals, courtesy of the governing New Democrats. Last month, it was a member from Lethbridge who told of the brutal abuse her ex-husband inflicted on her, to bring clarity to a debate on reforms making it easier for Albertans to escape domestic violence.

On Tuesday, an Edmonton-area New Democrat personalized transgender issues, as the legislature debated—and would unanimously support—explicitly adding gender identity and expression to the Alberta Human Rights Act. Estefania Cortes-Vargas, a former office aide to Premier Rachel Notley, had previously been public about being one of the first openly gay MLAs in Alberta history. Tuesday, Cortes-Vargas opened up about gender identity, and started with frustration that assembly Hansard traditionally records members with gender-specific honorifics like Mr. or Ms.

From the Hansard, here is the member recorded simply as Cortes-Vargas:

As I wrote my notes, Speaker, I started off by asking myself why I need to include in that your gender in order to identify you. I asked myself this question before I even came into this Legislature and was asked to identify my gender so Hansard could put that into the transcription.

I have always battled with gender identity, gender expression, and I continue to do so. A lot of the time I don’t have the answers to who I am, why I act this way, why I dress this way, but I do know this: I do know that I’m a person, that I deserve rights, and that anything less than that is unacceptable. Gender, Speaker, plays a role in everyone’s life, but for the trans community and for the gender-variant community it’s magnified to a level that creates high suicide rates, high unemployment rates, high levels of work in the sex trade because people are shunned.

People feel like they cannot be themselves without continuously having to explain to people that, hey, maybe I’m a boy and maybe I’m a girl. It shouldn’t matter. If the way I look confuses people, I love it. I will always continue to challenge that the way I look needs to define anything about me, because at the end of the day, when I look in the mirror, I say: “For the first time in my life, when I cut my hair, when I chose different wardrobes, when I challenged my cultural identity as a Hispanic woman, hey, maybe I don’t need to wear heels, and maybe I don’t need to have long hair just because that’s what is expected and that’s what’s considered beautiful. I think I’m a beautiful person.”

Today is a marker of a historic decision, historic but not because it’s new. It isn’t new, and frankly I’ve been waiting far too long for this. We do need action, and we do need education, so that’s why I was hoping to hear more voices from the other side. To truly make a difference in education, we need to have those voices heard, to make sure that we know that people are looking for something different, that people are hearing from the community that they’ve never heard from before, that people are reaching out. In order to do that, we need to hear your voices in the Legislature.

I’m humbled by the work that has been done by so many members and by, I always say, the courage, because it is a thing that at home you have to decide whether you’re going to be true to yourself or not. To look in the mirror and to see something that doesn’t represent you is heartbreaking, and that is a real experience of this community. To know that a society has accepted this as a way of being, as an acceptable law–yes, there were cases that made it so that everyone was welcoming. But to say that a community that has been marginalized to such an extent has to learn how to read law in order to defend their rights is unacceptable.

While I have my own personal experience that makes me extremely happy to see this happening, I know that there are many more stories, especially for the transgender community that works in the sex trade. It’s heartbreaking to know that they’re so ashamed, that they’re so discriminated against on a level in the workplace, that in order to make ends meet, that is the option that they have. In order to create a society that is truly welcoming and so that we can see the benefits of a diverse culture, we need to be empowering, and that is what this legislation starts.

I’ve gone through the speech without crying, so I feel like I’ve accomplished a very good thing. I know it has taken a lifetime for me to understand where I am, who I am to this day, and I will have many more years to really understand whether gender binaries are what define me or whether I choose to decide that I can define gender binaries in the same way it was created by society. That’s what I do every day. I ask myself who I am, why I act, and it will not be defined by words like “masculinity” and “femininity” because I will redefine them every single day, the same way that this community does in everything you do. Your support has been integral to my development into a healthy relationship, into a healthy self-esteem, and I am so grateful for the work that has been done before us.

It makes it feel like it’s a win not just for the government but for the community in an authentic and hard-fought way. That’s all I have to say. Thank you.

At this point, a Michael Connolly, a Calgary NDP member who is also openly gay, speaks.

Connolly: Thank you, Madam Speaker. The member touched on pronouns a little bit. I was just wondering if she could explain to the House how integral the use of pronouns is to many members of the trans and gender-nonconforming community and how using the incorrect pronouns can be triggering for many individuals.

Pronouns are a way of showing respect to the decisions that they have made, very personal and internalized decisions that they now want to be represented in their external world. That’s what pronouns do, and that’s what respecting pronouns does. That’s why thinking about and asking people what they prefer is truly important and signifies a culture that is accepting of differences and different ways of living.

I think one of the most tangible experiences, I guess, is going to the washroom. The fact that it says, when you walk in, what gender is supposed to be going in there is an experience for a lot of the community because they have to reflect over and over and over again, because of the way our society is built, on whether they’re going to enter a washroom that has a pronoun, that has a gender attached to it. When they decide to be called “she” or “he” or “they,” to respect that is how we change society. It’s how we show respect. It’s how we show that we are willing to educate ourselves and we are willing to accept differences amongst everyone.

So thank you for the question because I think that it is truly important and probably one of the first times the importance of pronouns has ever been talked about in this Legislature. You know, I’m being called Member Cortes-Vargas because I don’t think it is relevant to know in the transcripts whether I’m a woman or a man. Studies show that there is a difference in the way you interpret information, whether you’re a women or a man, so why does my transcript need to add that? What if I don’t know whether I’m a woman or a man? It doesn’t matter. I am a person, and Cortes-Vargas is my name, and that’s all you really need to know.

This is a slightly abridged version of the complete exchange.