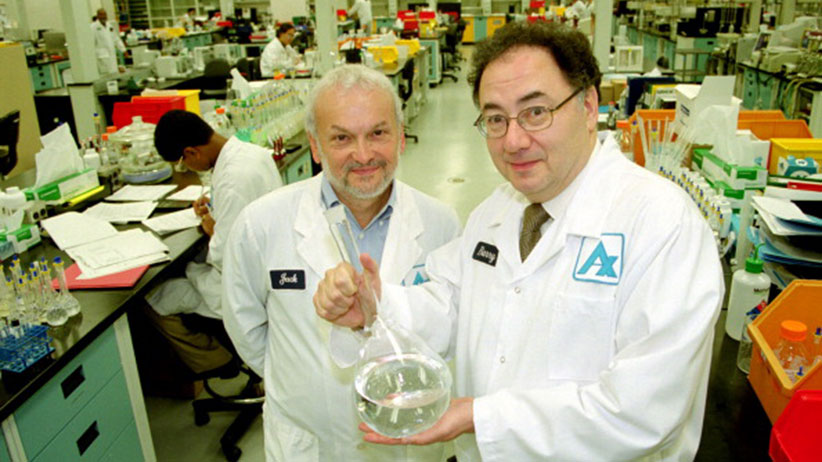 Sherman, right, in one of Apotex’s Toronto labs with Jack Kay, who returned to the role of CEO after Desai’s departure (Photo by David Cooper/Toronto Star via Getty Images)

The former CEO of Barry Sherman’s pharmaceutical company is fighting back against a sensational lawsuit launched by the world’s largest generic drug-maker—insisting he was never involved in a romantic relationship with a senior executive at rival Teva, and that he never persuaded the woman to illegally leak him lucrative trade secrets.

In a new court filing obtained by Maclean’s, Jeremy Desai responds for the first time to a high-profile U.S. lawsuit initiated last July—but thrust into the spotlight three months ago when Sherman, the billionaire founder of Apotex Inc., was discovered strangled beside his wife, Honey, at their Toronto home. The litigation triggered more headlines six weeks later, when Desai—Sherman’s choice to take over as president and CEO of his generic-drug giant—abruptly resigned “to pursue other opportunities.”

Launched by the U.S. division of Israel’s Teva Pharmaceutical Industries Ltd., the lawsuit’s core allegation is that Desai—married at the time to a fellow Apotex employee—had a girlfriend who worked for Teva USA, and that the pair conspired to steal highly sensitive corporate records via email and USB flash drives. The lawsuit, which also names Apotex as a defendant, claims one of the misappropriated documents was a “Complete Response Letter” from the U.S. Food and Drug Administration, detailing an application for a new generic medication identified only as “Product X.”

Desai’s alleged girlfriend was Barinder Sandhu, a fellow Canadian who worked as Teva USA’s senior director of regulatory affairs, where she earned an annual salary of US$193,000. Although Desai worked in Toronto and Sandhu lived in Wynnewood, Pa., Teva claims the two were involved in a “romantic relationship,” and that Desai “resided and/or cohabitated” with Sandhu.

None of that is true, Desai says. In his written reply to the lawsuit, filed Tuesday at a Pennsylvania courthouse, Desai admits he did have a “personal relationship” with Sandhu and exchanged emails with her using his company account. But he is adamant she was not his girlfriend, that they never lived together, and that he never participated in an alleged “scheme” whereby Sandhu passed along proprietary Teva records.

“Desai denies that [Teva’s] trade secrets and other confidential information were improperly shared with him or with Apotex through him,” the document reads. If Sandhu did breach Teva policy and upload sensitive data to her personal computer, the document continues, “Desai denies causing, encouraging, being aware of, or benefiting from any alleged violation.”

That Desai has mounted a defence is not the only development on the file. In yet another twist to an already bizarre case, Teva decided this week to drop Sandhu as a co-defendant in the lawsuit—for nothing in return, it appears. Fired in October 2016 (and later investigated by the FBI, in a probe that didn’t result in criminal charges), Sandhu’s suspicious activity is what sparked the lawsuit in the first place. Yet for reasons that remain a mystery, Teva filed a notice of voluntary dismissal on Monday, halting all claims against Desai’s alleged lover.

Why is she no longer being sued? Lawyers for Teva USA have yet to reply to a request for comment from Maclean’s. Lisa Mathewson, Sandhu’s Philadelphia-based lawyer, would only confirm that the parties did not negotiate an out-of-court deal. “Teva USA dismissed Ms. Sandhu from the case voluntarily, and not pursuant to a settlement,” Mathewson said via email.

What remains of the pillow-talk lawsuit is difficult to comprehend: Teva USA is still seeking damages against Desai and Apotex for allegedly stealing valuable company secrets, but it is not suing the ex-employee who allegedly leaked said secrets.

Apotex submitted its reply to the lawsuit on the same day as Desai, and like its former CEO, Canada’s largest drug-maker denies any wrongdoing. “Apotex has at all times acted in good faith,” reads the filing, which requests that the lawsuit “be dismissed in its entirety.” Apotex specifically denies acquiring any confidential documents from Teva—or that any such records were shared with multiple company executives, let alone used to “improperly profit at Teva USA’s expense.”

Born in England, Desai joined Apotex in 2003, serving as global head of R&D, then as chief operating officer, before Sherman selected him in August 2014 to take over as president and CEO. The two men clearly enjoyed a close relationship. In fact, it was Sherman who personally provided a $3.15-million mortgage—at zero interest, with no payment schedule—for the upscale Toronto home that Desai and his wife, Kalpna, purchased when they first moved to Canada. When the Shermans were killed, the full mortgage remained outstanding.

Kalpna Desai, who holds a PhD in biochemistry, was director of clinical programs at Apobiologix, a division of Apotex, when her husband resigned on Jan. 26. Although her name and photograph are still featured on the leadership page of the company’s website, it is not clear whether she continues to work for Apotex—or if she and Jeremy Desai are still married. Citing privacy reasons, the company says it does not discuss the status of individual employees.

Exactly why Desai left his job has not been publicly disclosed, either. In a prepared statement, Apotex said his resignation is “effective immediately,” adding: “We thank Jeremy for his contributions and wish him success in the next phase of his career.” By chance, the privately held drug-maker announced Desai’s sudden exit just hours before Toronto police convened a press conference to reveal that the Shermans had indeed been murdered, the victims of a “targeted” double homicide. Apotex insists the two announcements were “completely unrelated,” and that Desai’s resignation was “in no way connected to the death of Dr. Sherman.”

The new court filings come amid mounting speculation over the future of Apotex’s operations, post-Barry Sherman. The murdered founder and chairman, who launched his company in 1974 and built it into a global generics powerhouse, remained the driving force, even at age 75. The pharmaceutical industry is watching closely to see what changes, if any, are in the works now that Sherman is gone.

RELATED: Barry Sherman’s legal battle with his cousins goes on weeks after his murder

Ironically enough, the Teva litigation also comes as Apotex pursues a similar action against one of its own ex-staffers: a veteran chemist in Toronto who allegedly misappropriated millions of dollars’ worth of drug secrets from a laboratory computer, in the hopes of building a rival pharmaceutical factory in his native Pakistan. As Maclean’s reported last week, Mulazim Hussain was fired in January 2017—and the ensuing lawsuit, aimed at recouping the data he allegedly stole, was still active when the Shermans were killed. (Hussain denies that he purloined any company secrets.)

At one point, Apotex lawyers demanded that Hussain be imprisoned for 45 days for contempt of court because he allegedly refused to abide by a judge’s order to hand over email passwords and personal electronics. Apotex has since abandoned that effort, and court records show the company is now pursuing a summary judgment motion against Hussain.

A settlement conference in the Teva litigation is scheduled for later this month. If the case does reach trial, proceedings will begin June 28.