From joyous wedding to national tragedy 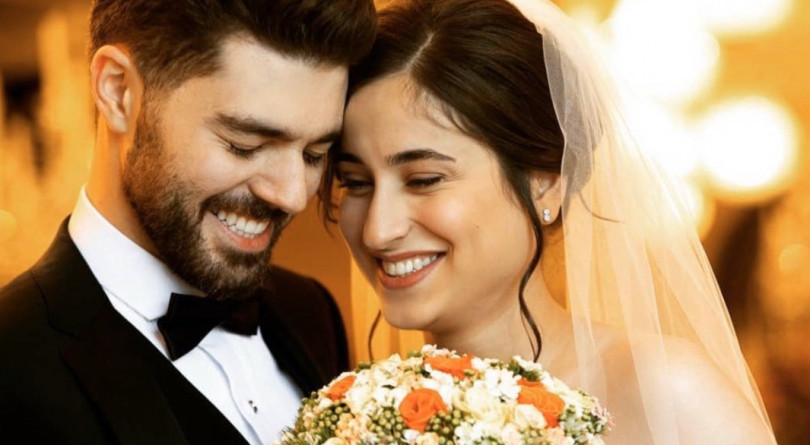 A wedding photo of Arash Pourzarabi and Pouneh Gorji. (Courtesy of the Iranian Heritage Society of Edmonton/Akhavan Studio)

Seven short days after what was supposed to be the beginning of the rest of their time together, newlyweds Arash Pourzarabi and Pouneh Gorji had their lives cut short on Ukraine International Airlines’ Flight PS752, which crashed in Iran shortly after take-off Wednesday at 6:10 a.m. local time.

The flight carried 176 passengers and was headed to Kyiv, but 78 per cent of those people—138—were flying on to Canada. Twenty-seven called Edmonton home, a disproportionate share for a western Canadian city with a small, close-knit Iranian community—one that is now bearing the brunt of the most deadly aviation disaster for Canadians in 35 years.

Pourzarabi, 26, and Gorji, 25, were among those Edmontonians. They were computer engineers carrying on their studies at the University of Alberta, and were looking forward upon getting back to catch up with their friends after a busy few weeks filled with wedding festivities and visiting their families.

Gorji’s high school friend and University of Alberta classmate, Farnaz Kohankhaki, had arrived in Edmonton a few days earlier after attending Pourzarabi’s and Gorji’s wedding. Stricken with grief, she remained in disbelief upon realizing she would not see one of her closest friends again.

“It was a big wedding,” Kohankhaki recalled of the ceremony in Tehran, which took place a week before the plane crash. The couple, friends said, were joined by numerous friends and family from both Iran and abroad. Gorji wore a white wedding dress that she purchased with her friends in Edmonton, and packed it with her to Tehran for her special day.

“They were really happy,” Kohankhaki said.

Pourzarabi and Gorji had known one another for five years, Kohankhaki said, having attended the same undergraduate university in Tehran. They continued their studies together at the University of Alberta starting in 2017, both completing masters degrees in computer science. Most of their relatives remain in Iran, friends said. 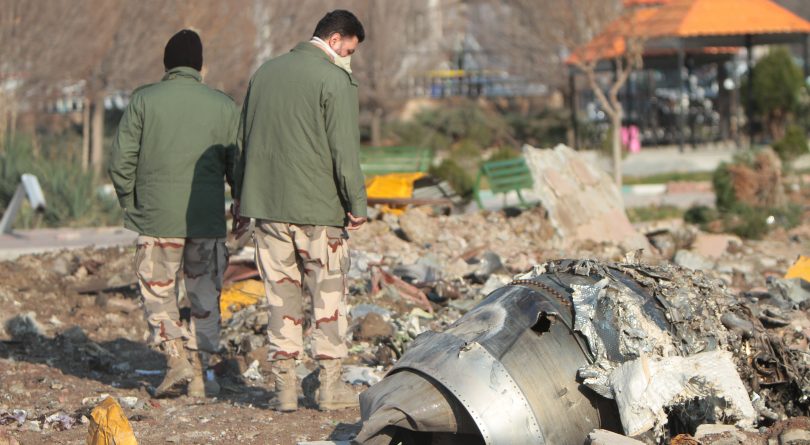 The crash site of the Ukrainian airliner that went down on Wednesday shortly after take-off from Tehran, killing all 176 people on board. (Mazyar Asadi/Pacific Press/LightRocket via Getty Images)

The couple had high hopes. Both were looking forward to completing their PhDs, their friend, Tina Baghaee, said. Gorji was pursuing a masters in computer science, and was part of a team researching new IT technologies for health care in Canada. Her husband, friends said, is equally as bright, and was researching artificial intelligence at U of A.

Baghee recalled staying up until 5 a.m. on some weekend nights, talking to the couple about their future plans. They lived across the street from Baghaee in Edmonton, and they saw each other often.

Pourzarabi proposed to Gorji in Edmonton in August, surprising Gorji with a ring he picked out earlier with his friends. The delighted couple began their wedding planning quickly after that. Baghaee fondly remembered accompanying Gorji to buy her wedding dress with all her friends—including the boys—in an Edmonton bridal shop. “They were so excited,” Baghaee said.

RELATED: For Trump, nothing but good news on Iran—and no mention of the plane crash

Many in Edmonton first heard the news of the plane crash through their usual social media channels around on the evening of Jan. 7, but Baghaee said it didn’t sink in that her friends were among the passengers, due to the time difference between Iran and Canada. She knew Gorji and Pourzarabi were supposed to return the following day, and thought they were safe until she suddenly realized that Iran is a day ahead.

Following that, a flurry of messages on Telegram, a popular messaging application for the Iranian community, began flowing in. Reza Akbari, president of the Iranian Heritage Society in Edmonton, said some messaging groups on the application have an upwards of 1,200 members—all from Edmonton; seemingly all were now worried for their friends’ and families’ safety. Many began identifying the victims they knew.

“I feel like they’re coming back and this is not true,” Baghaee said of the death of Gorji and Pourzarabi. “I haven’t accepted it yet.”

The loss hit hard for Iranian international students at the University of Alberta, who think of one another as family because most of their blood relatives live almost 10,000 kilometres away. In their small group of friends-turned-family, Pourzarabi and Gorji played a kind parental role, their friends said.

“They were always taking care of everybody, making sure that everybody is having a good time, everybody is safe,” said Mahdi Rahmani Hanzaki, another friend of the couple.

If Canadians heard about the crash before bed Tuesday night (it happened around 9:45 pm. ET, or 7:45 MT) most would have been terrified at this tragedy coming atop an already fraught geopolitical evening, with the Iranian strike of U.S.-coalition military bases in Iraq hours earlier.

Still, it remained a foreign tragedy at that point to many Canadians, removed from their domestic experience. By Wednesday morning, though, the news had hit viscerally close: 57* fellow citizens had been killed in one of the deadliest air-travel disasters in the country’s history. Later in the day, as people from Vancouver to Halifax learned about their fellow community members lost, Prime Minister Justin Trudeau put that already terrible figure into disheartening perspective: fully 138 people on PS 752, he clarified, were bound for Toronto—citizens, plus dozens foreign students and non-citizens who called Canada home.

That’s likely because Ukraine Air’s Tehran-Kyiv-Toronto connection had become one of the few commercial routes available linking Iran with this country. With diplomatic relations between Tehran and Canada in a longstanding state of chill, there are no direct flights. Passage through U.S. isn’t an option for most, either, thanks to the Trump administration shutting the door to citizens of Iran and other Muslim-majority countries.

For Iranian-Canadians, that leaves few travel options to their country of origin—Lufthansa through Frankfurt; Turkish Airlines through Istanbul; Ukraine Air through Kyiv. That’s pretty much it.

So the crash in Tehran claimed the lives of entire Canadian families making their way back to this, their new home country. They include a Toronto-area couple with their one-year-old daughter, the disaster’s youngest victim. Several sets of mothers and daughters perished. Student siblings. A teen boy on his own, far from home, in Grade 12 at a Calgary high school.

Numerous foreign students in PhD, master’s and post-grad programs, enriching Canadian universities with their research, lost their lives. People headed back to Iran for weddings, a funeral, an engagement party, or to delight parents and relatives with holiday visits. Mahdieh Ghassemi, a 38-year-old architect, had just won an award for designing that most Canadian of institutions: a Tim Hortons. She was on the flight with her son, Arsan, and daughter, Arnica, aged 11 and eight, respectively. 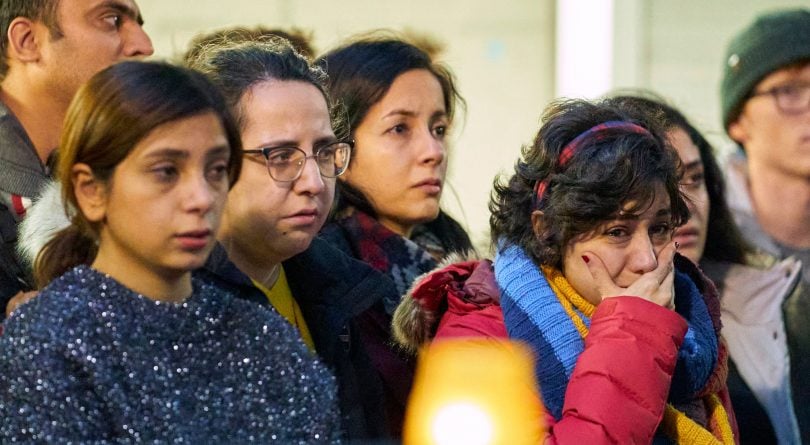 A memorial service at Western University in London, Ont. for four graduate students killed in the crash. (Geoff Robins / AFP via Getty Images)

Students at U of A, and within Edmonton’s Iranian community, spent most of Wednesday in mourning. They have lost not only the newlyweds, but several fellow students, as well. Two professors at the university’s faculty of engineering, Pedram Mousavi and Mojgan Daneshmand, and their two young daughters were also among the victims.

“Mojgan and Pedram were the happiest people that I knew,” their colleague, professor Masoud Ardakani, said via email. “They always had big smiles on their faces and the sound of their laughter could always be heard in the office. May they rest in peace.”

The university’s president, David Turpin, released a statement on the crash, describing the impact on students and faculty as devastating. “Words simply cannot express the loss I know we all are feeling,” Turpin said.

“Ours is a closely interconnected community, and we grieve with everyone touched by this terrible loss— friends, classmates, roommates, professors, students, mentors, and colleagues.” The university’s flags were lowered to half-staff on Wednesday.

Edmonton’s Iranian community also mourned the loss of a well-known gynecologist in the city, Dr. Shekoufeh Choupannejad, 50, who died alongside her two daughters, Saba, 21, and Sara, 23. Family friend Bardi Forghani said Choupannejad was only in Iran for two weeks, visiting her mother and other family members in Isfahan, a major city south of Tehran.

Forghani said Choupannejad was the youngest of four daughters, and had a very close relationship with her mother. Choupannejad called her mother daily from Edmonton before work, Forghani recalled, and visited her in Iran almost twice a year.

Choupannejad is survived by her son, who is studying in Toronto, and her husband, who is currently in Iran, Forghani said.

Payman Parseyan, a member of Edmonton’s Iranian community, said the disaster resulted in the loss of roughly one per cent of the city’s overall Iranian population, which Statistics Canada reported at 2,700 as of the 2016 census. It’s a small community with many recognizable faces, Akbari added, and the victims’ stories and lives cut short continue to reverberate through the grief of those who knew them.

“It’s hard to even believe such a thing has happened,” Akbari said.