From the archives: As a reporter, Morley Safer has never played it safe

Our 1998 profile of Morley Safer, the Toronto-born journalism legend and 60 Minutes newsman who died on Thursday 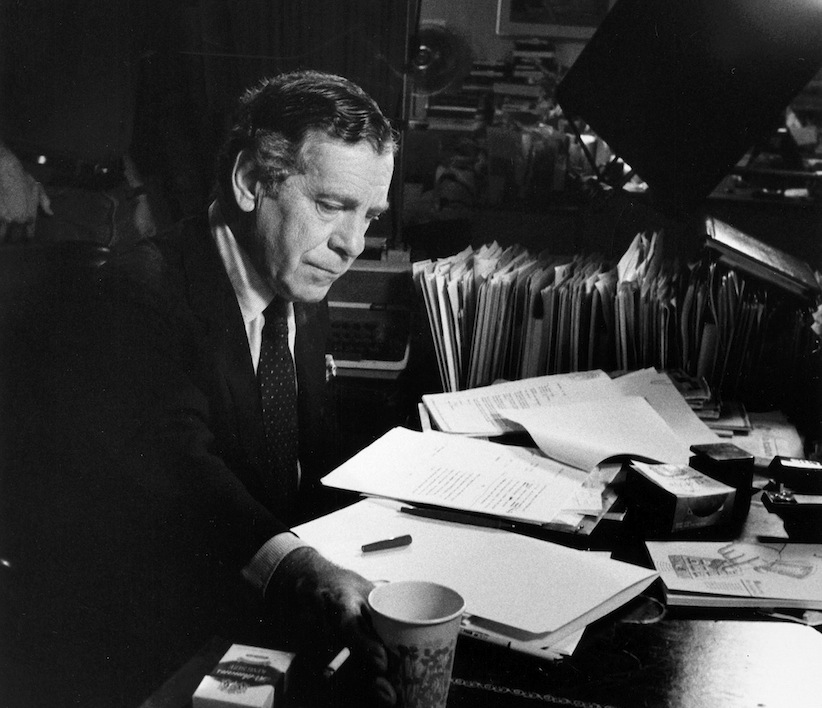 This 1985 photo released by CBS shows Morley Safer at his office in New York. Safer, the veteran “60 Minutes” correspondent who exposed a military atrocity in Vietnam that played an early role in changing Americans’ view of the war, died Thursday, May 19, 2016. He was 84. (CBS Photo Archive via AP)

On May 19, 2016, CBS newsman and 60 Minutes icon Morley Safer passed away. From the archives, Anthony Wilson-Smith wrote the following profile of the journalism legend in the June 22, 1998 issue.

At 4 p.m. one recent weekday, Morley Safer was doing what comes unnaturally—starting to count the days until his month-long summer vacation. “Every once in a while, the job hits you in the face,” said the Toronto-born-and-bred Safer, one of the longest-serving co-hosts (at 28 years) of the CBS newsmagazine 60 Minutes. “Lately, I’ve been on a marathon run.” True by any measure. As usual that week, Safer was in the office every morning by 7:30, and would not leave before that hour at night. He had just finished editing one piece due to air immediately, was working on three others in various stages, and juggling, Safer said, “about a dozen” proposals that might or might not ever get to air. “The rule here,” said Safer, lighting another in a chain of cigarettes, “is that there is no such thing as a surefire story.” In a reference to 75-year-old executive producer Don Hewitt, the 66-year-old Safer added: “You never know when that old bugger will surprise you.”

In the 30th-anniversary year of the show that CBS bills as “the most widely watched in the history of television”—based on its average viewing audience and number of years on the air—perhaps the biggest surprise is the ability of its cast to make the show interesting and informative week after week. Again this year, 60 Minutes, airing on CBS in the United States and CanWest Global in Canada, has finished in the top 10 in overall ratings, often attracting more than 20 million viewers. Its trademark symbol, a ticking stopwatch, may be the most familiar single image in television.

As always, the program’s key figures—led by Hewitt, 80-year-old Mike Wallace and Safer—take on large institutions, conventional wisdom and each other, with gleeful abandon. Over the years, the show has, for example, confronted Bill and Hillary Clinton about his alleged extramarital affairs, conducted an expose in 1990 of an incident in which Israeli paramilitary police opened fire on Palestinian youth, killing 17 of them, and, in 1995, questioned whether terminally ill patients on life support should be given a
drug that preserves their organs for transplant—while hastening death.

The irreverence of the 60 Minutes team extends towards each other. “Morley,” says Wallace with a grin, “may yet become something in this business.” Says Hewitt, in similar spirit: “The only quality lacking in Morley is his reluctance to accept that I am always right.” In their intensely competitive environment, a healthy ego also helps. “This has never been an easy place to work, and if it becomes so, we will be in big trouble,” says Safer, referring to the sometimes heated battles among the show’s principals over airtime and stories.

Safer has thrived through tenacity and well-honed reporter’s skills. But it was a twist of fate that attracted CBS. A University of British Columbia dropout, he worked at several media organizations in Canada and England before being hired by Reuters wire service in its London bureau. In 1955, he was offered a correspondent’s job in the CBC’s London bureau, and worked there nine years. “I had no thoughts of working anywhere else,” he recalls. As is the custom, the network brought its correspondents home for a televised discussion on world events. The anchor, Stanley Burke, sent a tape to CBS, hoping for a job offer. Instead, CBS offered Safer their London bureau.

In 1965, CBS sent Safer to Saigon to open a new bureau—as American military involvement was becoming controversial. Safer stayed two years, and his reports won a string of awards. He later wrote abouthis experiences in the acclaimed best-seller Flashbacks on Returning to Vietnam, published in 1990. Says Safer’s friend, fellow television journalist and Canadian Robert MacNeil: “Vietnam was typical of Morley: he wades in where others would not dare.”

Safer’s reporting drew the ire of senior political figures, including President Lyndon Johnson. As writer David Halberstam recounted in his book The Powers that Be, Johnson was incensed when a Safer report showed how U.S. troops brutalized Vietnamese civilians, using Zippo lighters to torch their huts. He demanded a check on Safer: even the Royal Canadian Mounted Police were enlisted to investigate his family. Wrote Halberstam: “Told by aides that Safer was not a Communist—as he suspected—but simply Canadian, the president said, ‘‘Well, I knew he wasn’t an American.”

In 1970, when Hewitt needed an on-air figure for his fledgling 60 Minutes, he had, he recalls, “one name on my list—Morley.” Hewitt says, Safer “was—and remains—the most elegant figure in television journalism.” His avuncular manner, literate writing and Canadian accent—slightly exotic to American ears—provided a counterpoint to Wallace, with his aggressive interview style . The two are the program’s longest-serving stars. Says Wallace: ‘‘Morley is one of the most gifted writers ever to tell a story on
television.”

As is the mandate at 60 Minutes, Safer looks beyond the day’s headlines for stories. His pieces range from celebrity profiles—”the thing I dislike the most”—to slice-of-life features to the hard-hitting exposes for which the show is most famous. The episode of which he is most proud, he says, aired in December, 1983, and revealed new evidence resulting in the release from prison of Lenell Geter, an engineer wrongly convicted of armed robbery and sentenced to life. Such work has earned Safer 11 Emmys and led to him being named a knight of the French government’s Order of Arts and Letters in 1995.

Safer credits his success to qualities springing from his Canadian upbringing. ‘‘We came out of a pretty demanding, strict, rigorous on-the-job training at the CBC,’’ he says. And, he adds, ‘‘Canada, as a small country, has a greater interest in foreign affairs. Here, the focus is on America’s place in the world.’’ Still a Canadian citizen, Safer says he feels ‘‘stateless. I am not American, whatever that is. I cannot say ‘we’ in the collective national sense.’’ He adds: ‘‘I feel Canadian, to the extent that I am one, but it is more than three decades since I lived there.’’ That outsider’s sense, Safer says, helps him because ‘‘I bring a different perspective, and I have no vested interests.’‘

Safer’s Canadian links have become more frail over the years. His wife, Jane, a consultant, to whom he has been married 30 years, is an American citizen, as is his daughter, Sarah, 28, a television journalist with a New York City cable station. Safer has an older brother, Leon, and a sister, Esther, in Toronto, and returns several times a year. He is in touch with some old friends—including novelist Mordecai Richler. The two, who met in the 1960s in London, were reunited when Safer interviewed Richler for a 60 Minutes segment ridiculing Quebec’s language laws. The piece, Quebec Premier Lucien Bouchard conceded, was largely responsible for a damage-control visit that Bouchard made in May to the United States. Safer says he was “amused” by the response in Quebec, but adds: “I found it a real eye-opener to discover that a Canadian province would go to such lengths on language.”

In a profession that makes a fetish of youth, Safer takes pride in his shopworn appearance. “You’d never get on TV today with a mug like mine,” he remarks. Safer bemoans much of today’s television programming, saying that it makes him feel “annoyed, angry and abused as a viewer.” He taps out scripts on a manual typewriter, avoids computers when possible, and is a throwback to when tobacco and whisky were essential for a newsman. He beams as he recalls that with Richler, “we put away a bloody impressive amount of single malt.”

Safer has no plans to retire—and the network is in no hurry to see him step down. “Morley,” says Andrew Heyward, the president of CBS News, “is in that small group of journalists whose name will always live on.” Despite his comfort with his age, Safer seems vaguely bewildered that his energy is trapped inside a sixty-something man.

“I swear that if I ignore the mirror, I feel about 30,” he says, then amends himself. “Well, maybe 40—but that’s it, tops.” Like the 60 Minutes stopwatch, Safer shows no sign of winding down.