A retired Supreme Court justice looked at ways to get more Indigenous people onto juries. Among his ideas: end 'discriminatory use of peremptory challenges.' 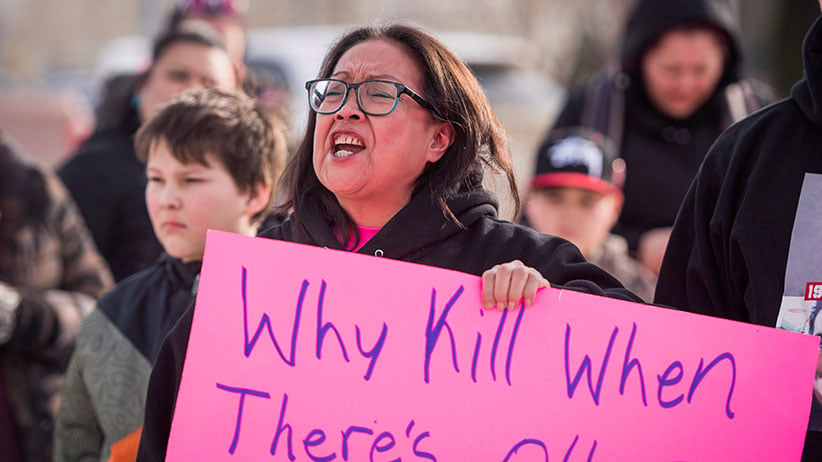 Outrage and fierce protest has erupted across the country after the acquittal of Gerald Stanley, a farmer from rural Saskatchewan found not guilty by an all-white jury in the killing of Colten Boushie, a 22-year-old Cree man from the Red Pheasant First Nation. It was a ruling, many say, that offered no justice for Boushie and his family, in a trial that could, alternatively, have resulted in a conviction of second-degree murder or manslaughter.

Since the decision was read, Indigenous people and other Canadians have questioned the jury selection process in a case that was racially charged from the outset. They may not be wrong. Kent Roach, criminal law and constitutional rights expert at the University of Toronto, has described Canada’s system of allowing pre-emptory exclusion of jurors as “a stone-cold invitation for jury selection to be infected by conscious or unconscious racist stereotypes.”

In his 2013 report on First Nations Representation on Ontario Juries, Frank Iacobucci, a former justice of the Supreme Court of Canada, highlighted similar concerns. Iacobucci investigated the underrepresentation of First Nations people living on reserves on the province’s jury roll, a crisis he said raised concerns “about the fairness of our jury system.” “Overrepresented in the prison population, First Nations peoples are significantly underrepresented, not just on juries, but among all those who work in the administration of justice in this province, whether as court officials, prosecutors, defence counsel, or judges,” Iacobucci wrote. Here are excerpts from his recommendations on how to reform jury selection in Ontario:

Recommendations Respecting the Reform of the Jury Selection Process

There is a consensus shared with everyone with whom I met, including government officials, that the current practices followed by Court Services officials to compile the jury list are not achieving results that adequately represent First Nations individuals on the jury roll. It is clear that steps must be taken to obtain access to a database that contains an up-to-date record of the names of individuals living on reserve. The current reliance by Court Services officials on obtaining the names from Band List information, though resulting from well-meaning efforts, is ad hoc and leads in many cases to out-of-date and otherwise unreliable information being used to compile the jury roll. In addition to obtaining an accurate and comprehensive data base, it is clear that much more needs to be done to encourage First Nations individuals to complete and return jury questionnaires when they receive them, and to serve on juries when summonsed to do so.

As with my recommendations respecting systemic issues, it is crucial that approaches to deal with these challenges be carried out collaboratively with PTOs and First Nations and coordinated through the Implementation Committee described above, that they take into consideration interests of individual privacy, and that they give due respect to First Nations’ autonomy. My hope is that if these issues are pursued on the basis of a relationship of mutual respect and consistently with the government-to-government relationship between First Nations and Ontario, First Nations governments will cooperate to find practical solutions that will overcome these privacy and other logistical issues, so that an appropriate comprehensive an accurate database of First Nations individuals living on reserve can be compiled.

In order to address these issues, I recommend that:

RECOMMENDATION 8: the Ministry of the Attorney General, in consultation with the Implementation Committee, undertake a prompt and urgent review of the feasibility of, and mechanisms for, using the OHIP (Ontario Health Insurance Program) database to generate a database of First Nations individuals living on reserve for the purposes of compiling the jury roll. This appears to me to be the most promising means by which First Nations names can be added to jury rolls. It is my hope that, if it proves feasible, the use of the OHIP database will be implemented on an urgent basis.

RECOMMENDATION 9: in connection with this review, the Ministry of Attorney General and First Nations, in consultation with the Implementation Committee, consider all other potential sources for generating this database, including band residency information, Ministry of Transportation information and other records, and steps that might be taken to secure these records, such as a renewed memorandum of understanding between Ontario and the Federal government respecting band residency information or memorandums of understanding between Ontario and PTOs or First Nations, as appropriate.

RECOMMENDATION 10: the Ministry of the Attorney General, in consultation with the Implementation Committee, consider amending the questionnaire sent to prospective jurors to:

RECOMMENDATION 11: the Ministry of the Attorney General, in consultation with the Implementation Committee, consider implementing the practice from parts of the U.S., that when a jury summons or questionnaire is undeliverable or is not returned, another summons or questionnaire is sent out to a resident of the same postal code, thereby ensuring that nonresponsive prospective jurors do not undermine jury representativeness.

RECOMMENDATION 12: the Ministry of the Attorney General, in consultation with the Implementation Committee, consider a procedure whereby First Nations people on reserve could volunteer for jury service as a means of supplementing other jury source lists. This is practised in New York State as a way to supplement jury rolls drawn from several other lists that might overlook certain individuals, and could serve a similarly valuable purpose with respect to First Nations peoples in Ontario. By supplementing other jury source lists in this manner, the Ministry of the Attorney General and the Implementation Committee would wish to be satisfied that this would not offend the randomness principle.

RECOMMENDATION 13: the Ministry of the Attorney General, in consultation with the Implementation Committee, consider enabling First Nations people not fluent in English or French to serve on juries by providing translation services and by amending the jury questionnaire accordingly to reflect this change.

RECOMMENDATION 14: the Ministry of the Attorney General, in consultation with the Implementation Committee, adopt measures to respond to the problem of First Nations individuals with criminal records for minor offences being automatically excluded from jury duty by: