Halifax tried to hide Edward Cornwallis, but we found him

Strapped in a plywood box to a pair of rusting shipping containers is no way to treat the statue of a historical icon. Or is it? 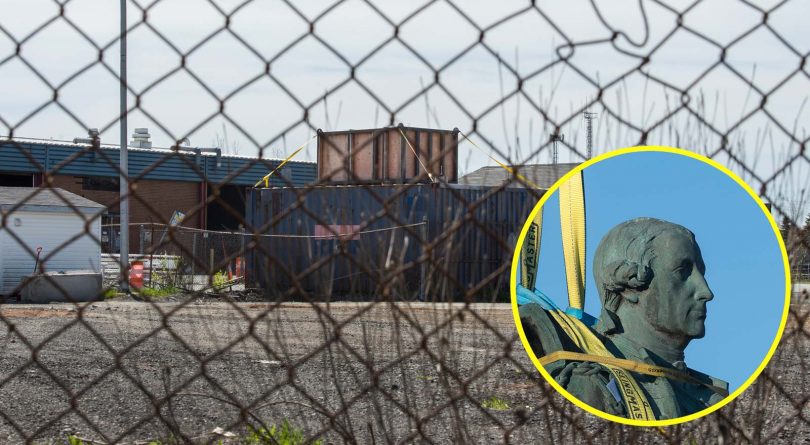 A crate allegedly containing the statue of Edward Cornwallis (inset) is strapped on top of a metal container in a municipal depot in Dartmouth, N.S. on Wednesday, May 16, 2018. (Photograph by Darren Calabrese)

The search for the top-secret hiding spot of the statue of Halifax’s controversial founder Edward Cornwallis began on the last day of January, after a crane truck carrying the deposed figure evaded tailgaters into a maze of interchanges at sunset.

The city had refused to reveal its clandestine location, purportedly out of concern of vandalism, despite the fact the monument had stood more or less unscathed for decades in a public park.

On a warm May morning—four and a half months after the icicled bronze figure was hoisted into the air in south end Halifax —Maclean’s tracked Cornwallis down to the top of a grassy knoll in Burnside, a large industrial park across Halifax Harbour in Dartmouth. Here, through a chain link fence, past litter and a rusted-out oil tank, the statue could be seen in its newfound ignominy, strapped atop two shipping containers and shielded from public view inside a plywood box.

It’s a stark contrast to its former granite pedestal, and by all indications, Cornwallis will be here for a while.

The statue’s final resting place is to be eventually determined by a special advisory committee struck by the city. But after more than six months, the members of the eight-member committee have yet to be named.

The Assembly of Nova Scotia Mi’kmaq Chiefs is responsible for submitting four of those names. Assembly chief Rod Googoo said he has submitted a number of names, and the formalization of the committee is now in city council’s hands. “We hope to see the committee hold their first meeting very soon,” he said.

A city spokeswoman said a report on the formation of the committee will be added to the council agenda in a few weeks. 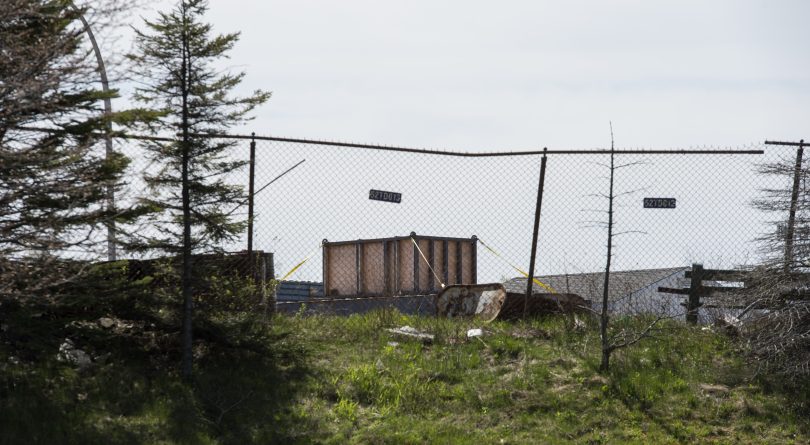 A crate allegedly containing the statue of Edward Cornwallis is strapped on top of a metal container in a municipal depot in Dartmouth, N.S. on Wednesday, May 16, 2018. (Photograph by Darren Calabrese)

Meanwhile, Cornwallis is holed up, seemingly indefinitely, in a makeshift crypt that Halifax’s deputy mayor Waye Mason jokingly compares to the Arc of the Covenant which, in the Indiana Jones movie Raiders of the Lost Ark, is stashed in a wooden box and hidden in a warehouse. “Until we decide what to do with it, it’s right next to the ark in that warehouse,” he said.

Mason, who in 2016 tried to start a committee to examine commemorations of Cornwallis in response to public outcry, said the city wants to keep the statue’s location secret to avoid it becoming a rallying point for pro- or anti-Cornwallis activists.

“What happens if Ezra Levant decides to have a protest in front of where it’s stored, and the Rebel Alliance decide to come out?” said Mason, referring to the right-wing provocateur and founder of Rebel Media. “We don’t want to further inflame and radicalize this discussion around the statue. We want to have a rational debate focused on smart people and community engagement deciding what we do next.”

RELATED: Statues of limitations: Why the present shouldn’t attack the past

The Cornwallis statue became a national flashpoint last summer when the alt-right group Proud Boys confronted a spiritual event at the effigy that marked the suffering of Indigenous Peoples on Canada Day.

As governor of Nova Scotia, Cornwallis founded Halifax in 1749, and in response to attacks on colonists, soon after issued a scalping proclamation that offered a cash bounty for the killing of Mi’kmaq men, women and children.

The city’s 12-4 vote to remove the statue of the military officer came at a time when calls to dismantle monuments of polarizing historical figures who symbolize inequality and racism had arisen across the continent. 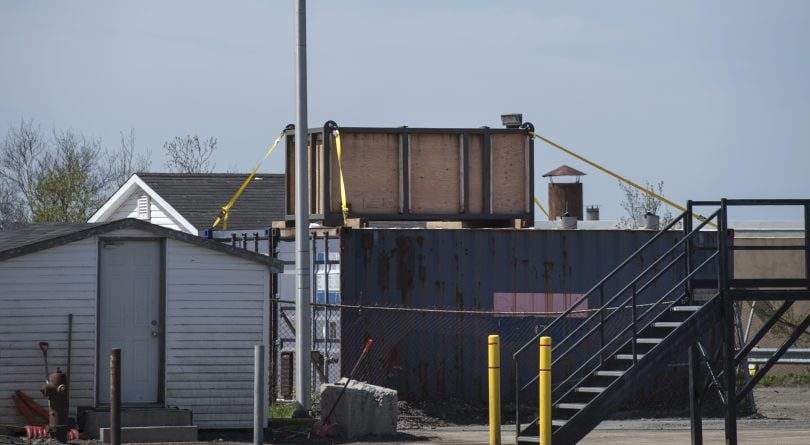 A crate allegedly containing the statue of Edward Cornwallis is strapped on top of a metal container in a municipal depot in Dartmouth, N.S. on Wednesday, May 16, 2018. (Photograph by Darren Calabrese)

The city dismantled Cornwallis Jan. 31, five days after the Assembly of Nova Scotia Mi’kmaq Chiefs called for its immediate removal in response to its frustration over delays in formalizing a committee to discuss the statue’s fate.

Since news broke of the city’s decision to temporarily remove the statue in a gesture of respect and reconciliation, Mason said an unprecedented amount of mail has flooded into city hall from across the country, with the primary objection being “they did it too.”

RELATED: The push to erase Canada’s racist past

For him, it doesn’t wash. “The Mi’kmaq and the Acadians were equally vicious as the British during that period from 1710 to 1776, to the Halifax Treaties. But contemporarily, you wouldn’t put up a statue glorifying an Acadian who killed a bunch of British settlers, or a Mi’kmaq who disemboweled Cornwallis’s gardener. You wouldn’t put up a statue to any of those people now,” he said.

“I don’t care if what those people did was laudatory by the standards of the day. What matters is: what do we think about that now?”

Mi’kmaq activist Rebecca Moore, who has advocated for commemorations of Cornwallis to come down, suggested focusing on the bigger picture. She says she doesn’t care where the statue is as long as it doesn’t go back up, though she admits suggesting it may become vandalized if its location is revealed is insulting.

“We’ve had countless peaceful demonstrations and protests, and some of them are geared towards the resistance and no violence has ever broken out,” said Moore, a member of Pictou First Nation. “I interpret it as white people still being afraid of Indians. It’s a fear-based approach.”

Instead of concentrating on uncovering the statue’s location, Moore suggests uncovering the lost story of the burying of the hatchet, which occurred in Halifax on June 25, 1761 to mark the end of more than 75 years of war between the Mi’kmaq and the British. The neglect of such stories, she says, is why “we find ourselves here today with these current racial tensions.” 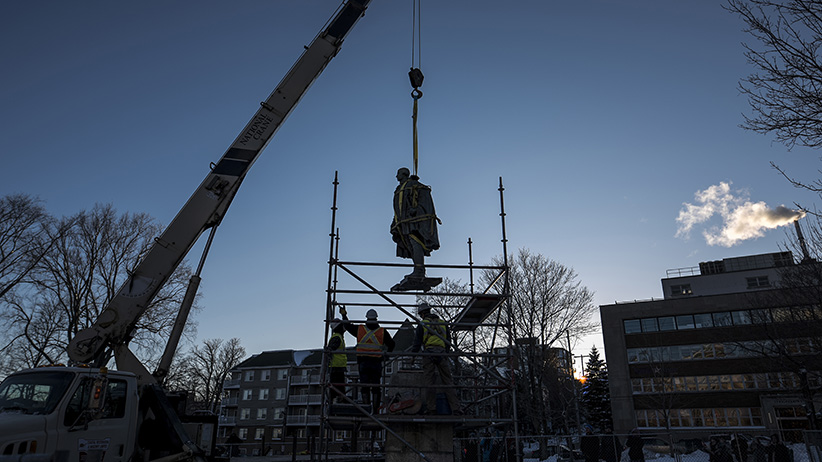 The statue of Edward Cornwallis is removed from its pedestal in Halifax on Wednesday, January 31, 2018 after city council voted to put the cast in storage until a more permanent decision can be made. (Photograph by Darren Calabrese)