On Canada Day, protesters mixed with patriots. There was chanting, singing and a tense moment or two. 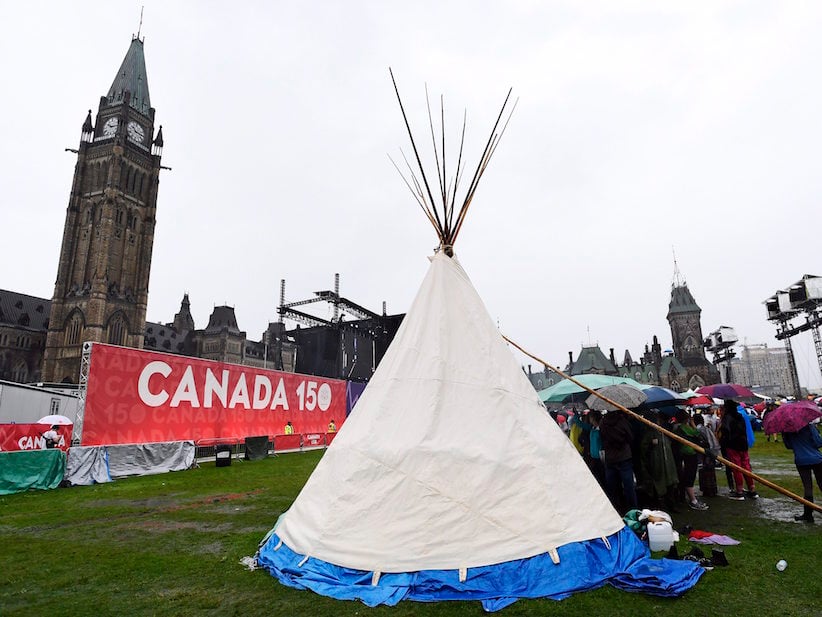 A teepee stands on Parliament Hill during Canada 150 celebrations in Ottawa on Saturday, July 1, 2017. THE CANADIAN PRESS/ Justin Tang

Just before noon on Parliament Hill, the Canada Day crowd of around 25,000 shares a palpable relief that the morning downpour has relented in time for the official program to begin.

Many thousands more stand patiently in line, looping around the blocks leading up to the Hill, waiting to clear security. Look up at the helicopter thud-thudding overhead, and the clouds are lighter than they were.

The screens on either side of the big stage erected in front of the Peace Tower show Prince Charles coming nearer along Wellington Street in an open horse-drawn carriage, accompanied by Mounties on horseback in red serge.

Over by the white teepee that authorities allowed First Nations protesters to put up in the northwest corner of the lawn in front of the Centre Block two days ago, activists are holding up a banner: “KKKanada 150 celebrates genocide.”

They’re a loose agglomeration of a few dozen Indigenous activists, including a core group from Sault Ste. Marie, Ont. called the Bawaating Water Protectors, and their supporters, who say celebrating 150 years since Canada’s creation is an insult to First Nations who have been here a lot longer and today face terrible social and economic problems.

Soon the wider crowd—almost all wearing red and white, and quite a few in maple leaf-festooned rain ponchos, some with matching face paint—sees on the big screens that the prince and Prime Minister Justin Trudeau and their wives have arrived. They’re shaking hands with Indigenous leaders, including Assembly of First Nations national chief Perry Bellegarde.

There’s nothing like that by the teepee. For instance, Paul Francis, a 24-year-old activist from New Brunswick’s Mi’kmaq Warrior Society, is in a black hoodie, camouflage pants and practical rubber boots. (The grass is soggy beyond saturation.)

The main show gets rolling with First Nations drumming and dancing, first traditional and then modern. Some of the group from the teepee heads over toward the Centennial Flame, nearer where the official party is concentrated and drummers and dancers are doing their thing. Police follow at a discrete distance, weaving through the crowd. Nothing transpires beyond slogan-chanting and sign-waving.

Then Buffy Sainte-Marie, born in 1941 on the Piapot Plains Cree Nation Reserve in Saskatchewan, is introduced and takes over at the centre of the big stage. “We’re only here by the skin of our teeth,” she sings. The core teepee group, maybe 20 or 30 strong, stays quiet.

But when Sainte-Marie is done, and a soprano walks out to sing “God Save the Queen,” the demonstrators crouch rather than stand. Next, during “O Canada,” they let loose some booing and hollering, and some lie down in the wet grass. “Home on native land, home on native land,” they chant.

A little while later, there’s a speech from Heritage Minister Mélanie Joly, whose declaration that Canada is “a beautiful work in progress” prompts an isolated cry of “Canada is genocide,” but it can only be heard by those near the teepee.

When Trudeau steps up behind a red podium, around 12:40 p.m., some in the main July 1st throng turn to shoot sour looks toward the teepee, where it has suddenly grown noisier. “Please stand with us,” they chant as the Prime Minister launches into what turns out to be a rather long speech.

Of course, he doesn’t ignore the Indigenous protests about how marking a century and a half since Confederation doesn’t sit well with people who have been here thousands of years. How could he? “Today isn’t really our 150th birthday,” Trudeau says. “We’re much older than that.”

A dozen or so from the teepee decide to wade single file into the main crowd and closer to the stage as Trudeau’s speech drags on. The people they squeeze past don’t seem overly bothered about being distracted from the Prime Minister’s dissertation, even if they occasionally miss something he’s saying entirely, maybe a quote from Louis St-Laurent, when a shout of protest rises momentarily.

Now and then one of Trudeau’s patriotic lines brings the audience back to him a little. Mention of Terry Fox gets a big cheer, of course. There’s spontaneous applause for his reference to the need to tackle climate change. His attempt at a rousing closing line is, “For this is Canada and this is home!” Which naturally triggers another round of “Home on native land” chanting.

The next big attraction is Bono and The Edge. They perform “One Love,” an old U2 hit. “One love, sisters and brothers,” Bono sings. A lone man starts threading his way through the crowd away from the teepee area, attracting the attention of police. A few Mounties converge and wrestle him to the ground. Or rather, onto a colourful ground sheet, laid out there by a family taking in the show.

After a few moments holding him face down, the Mounties take him away. The family, which backed a few strides off from the fracas, reclaims their dry patch. No harm done, the dad says. Only a few dozen nearby people seem to have noticed the muted commotion. It doesn’t really interrupt the performance of the visiting rock stars.