Hours from death, these birds survived a tarry encounter with Alberta's oil sands

When dozens of aquatic birds landed in an oil sands tailings pond, saving their lives wasn’t easy. But an Edmonton rehab agency managed to send some back into the wild. 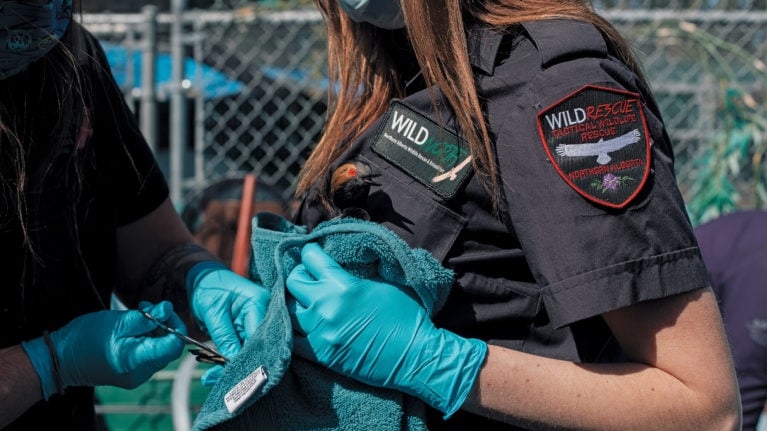 Employees at WILDNorth in Edmonton prepare an eared grebe for release back into the wild; each survivor is 'the best of the best,' says Blomme (Photograph by Amber Bracken)

In early May, about a dozen waterfowl arrived at the front door of the WILDNorth Centre, a wildlife rehabilitation agency located in a one-storey building in Edmonton’s northwest end. They had not come of their own volition: their feathers were saturated with thick, tarry bitumen that made it impossible for them to fly or even swim. A few were hours from death.

The birds—mostly eared grebes—were among an estimated 60 that Imperial Oil workers had plucked from a tailings pond at the Kearl oil sands facility, 70 km north of Fort McMurray, Alta. Most didn’t survive, but Imperial staff tasked with wildlife mitigation nestled the few that had a fighting chance on towels, and dispatched them in makeshift cardboard travelling crates on the six-hour journey down Highway 63 to the Alberta capital.

Over the following days, a few more birds arrived in the heated luggage compartment of a plane, bringing the number of new admissions at the agency to 16—13 eared grebes, two horned grebes and one pied-billed grebe. All were listed in “intensive care.”

Rehabilitation missions of this magnitude are rare for WILDNorth, an organization that runs a small staff and survives mainly on donations. The requirements of social distancing didn’t make the task easier. Still, the centre’s team began the painstaking process of feeding the grebes fluids through throat tubes and waiting for them to stabilize to allow cleaning—a process that required seven pairs of hands, three bottles of Dawn dishwashing liquid and several gallons of soft water for the entire flock. 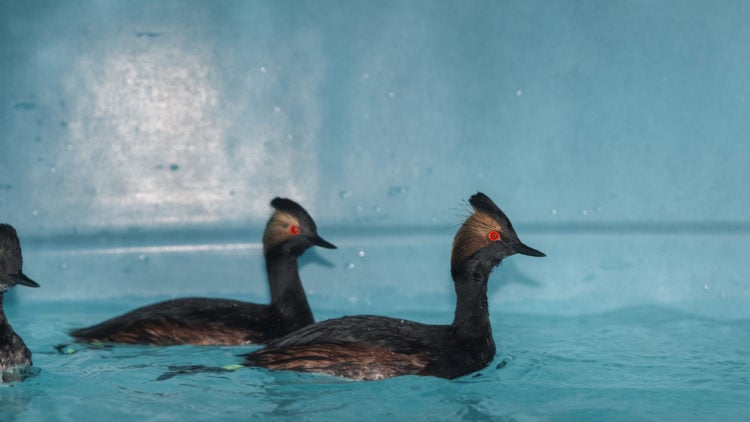 Rescued Grebes swim in their rehabilitation pool at Wild North wildlife rescue, in Edmonton, Alberta on Friday, May 15, 2020. Fifteen birds were rescued from a tailings pond in Alberta’s oil sands near Fort McMurray but only 7 survived. One of the Grebes in the group is recovering from an unrelated trauma. Amber Bracken

The odds were long: if half the birds survived, the effort could be considered a success. “Some people think it’s a complete waste of time, money and energy,” says Kim Blomme, who founded the centre 30 years ago. “But it’s very difficult to see an animal in distress.”

The threat the oil sands pose to wildlife is a sensitive issue in Alberta. Lakes in the province’s northern portion are landing spots for several migratory bird species, while its boreal forest is home to grizzly bears and beavers—creatures whose welfare has been overlooked, critics say, in the rush to develop energy resources.

Those calls intensified in 2008, when 1,600 ducks died after landing in a Syncrude Canada tailings pond. The oil giant was forced to pay $3 million in penalties, part of which went to fund bird migration research and conservation, and the disastrous publicity from that incident reverberated among oil and gas companies. Many stepped up efforts to minimize their ecological impact.

Wildlife advocates, however, say animals and birds are still being caught in the industry’s path. “These are the ones we know about, right?” Blomme says of the animals her organization has rescued. “I’m sure it happens more than we know.”

Still, it’s been seven years since Blomme has seen a bird rescue mission the size of the one in May, and Imperial Oil officials can only guess why their efforts to keep these birds out of harm’s way failed. Knowing that spring marks the return from Mexico of migratory birds such as the eared grebes—so named for the unique golden feathers that sprout out of the sides of their heads—the company had deployed its wildlife monitoring system in late March, which includes deterrents in the form of noise cannons, eye-safe lasers and scarecrows.

The grebes, however, were likely tired after flying thousands of kilometres back to northern Alberta for breeding season, and evidently mistook the tailings pond for one of the nearby freshwater sloughs. In an email, Imperial Oil spokesperson Lisa Schmidt noted that, unlike the tailings pond, most of the natural water bodies in the area were still frozen from a long winter, the end of which had started an “abrupt migration.” The landings, she said, “were most likely influenced by near freezing precipitation, which historically has resulted in migrating birds landing on such areas due to exhaustion.” 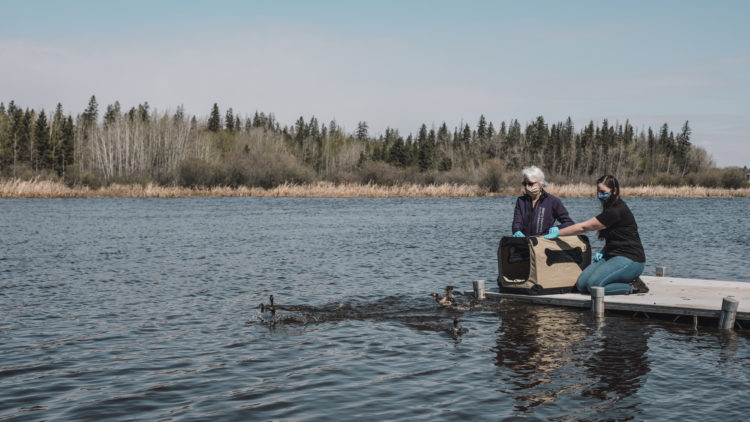 Kim Blomme, left, and Carly Stenhouse release rehabilitated Eared Grebes in St. Albert, Alberta on Friday, May 15, 2020. Only 7 of 15 birds survived after they were rescued from a tailings pond in Alberta’s oil sands near Fort McMurray. Amber Bracken

Imperial reported the incident to the Alberta Energy Regulator (AER) and has provided updates on it. The AER could trigger an investigation if it suspected non-compliance, but on May 20 it suspended environmental monitoring due to COVID-19, and at press time, no formal investigation had been opened. Said Schmidt: “We very much regret this situation and are making every effort to protect the birds and learn from these increased landings.”

The damage to the grebes, meanwhile, was plain to the naked eye. The water in their first baths quickly turned chocolate brown, as did the white latex gloves of the workers handling them. Handlers must ensure every drop of bitumen is cleaned off a bird—from underneath its feathers to the corners of its eyes—to maximize its chance of survival. If water doesn’t bead on the feathers of aquatic birds, they’ll have difficulty moving or swimming.

By the end of two weeks, only eight had survived and been released back into the wild. Six died during cleaning, and two were euthanized because they showed no signs of improvement. Each loss is heavy, but Blomme and her team regarded the outcome as a minor victory. The survivors, she says, are “the best of the best”—the ones that have the exceptional fortitude to carry their species forward.

Like most Canadians (and many Albertans), Blomme has never set eyes on the sprawling clusters of brown and beige—pits, ponds and industrial plants—that compose the Alberta oil sands. She credits energy companies like Imperial for increased mitigation efforts of late: “They’re proud of their company and they’re proud of the work that they do, and this has been a disaster for them.” But given the way humans inhabit earth, she adds, the creatures around them will keeping paying with their lives: getting hit by cars, electrocuted by power lines or unwittingly landing on tailings ponds.

“We feel like we created this situation, so we have an obligation to try to assist,” she says. “It’s compassionate care. What else are you going to do? You can’t leave them out there like that. That’s inhumane.”

This article appears in print in the July 2020 issue of Maclean’s magazine with the headline, “Cleared for takeoff.” Subscribe to the monthly print magazine here.