In 1862, smallpox killed thousands of Indigenous people in B.C.—and what ensued sparked issues that the province still grapples with today 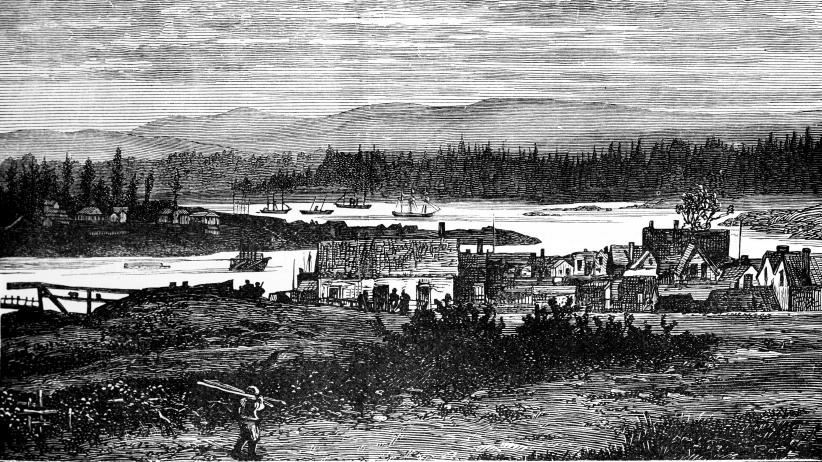 On Mar. 12, 1862, the San Francisco steamer Brother Jonathan pulled into the boisterous colony of Vancouver Island, a former Hudson’s Bay Company fur trading post that had exploded in population after a mainland gold rush.

“The town was taken completely by surprise,” wrote the British Colonist newspaper, reporting that along with merchandise and mules, the ship carried 350 passengers to Victoria—home to 4,000 to 5,000 colonists, with slightly more Indigenous people from various nations camped nearby for trade and work. Most of the passengers were heading to a new strike on the Salmon River.

But along with his pickaxe and gold pan, one of these miners brought another piece of unexpected cargo: smallpox.

The man was quarantined. But the Colonist noted that, without preventive measures, “we fear that a serious evil will be entailed on the country.” And the measures the colonial government chose—limited vaccination efforts, and declining to try a general quarantine, which would have kept the crisis localized—wound up leading to an epidemic when police emptied the camps at gunpoint, burned them down, and towed canoes filled with smallpox-infected Indigenous people up the coast.

Over the next year, at least 30,000 Indigenous people died, representing about 60 per cent of the population—a crisis that left mass graves, deserted villages, traumatized survivors and societal collapse and, in a real way, created the conditions for modern-day British Columbia. Less than a decade before B.C. became Canada’s sixth province, the colonial response to this crisis formed the basis for the fraught relationship between First Nations and government and sparked the question of what this problematic past means for its future.

“The smallpox epidemic … it changes everything in British Columbia,” says John Lutz, the head of the University of Victoria’s history department and an Indigenous-settler relations specialist. “The citizens of Victoria, one could say, panicked. Or, one could say, with a less charitable view, that they deliberately drove the Indigenous people out of town, and that spread the disease back to their home communities up and down the coast.”

It was a betrayal that hasn’t been forgotten by many Indigenous people. “The sad thought is, if they had contained those people who contracted smallpox within the Victoria area, the Indigenous population would be far, far higher today,” says Marianne Nicholson, a Victoria-based artist and anthropology Ph.D from the Dzawada’enuxw Nation of the Kwakwa̱ka̱’wakw whose video installation about the epidemic, There’s Blood In The Rocks, is being exhibited at Victoria’s Legacy Art Gallery until September. Nicholson’s nation’s population fell to 1,500 from 10,000, and has since rebounded to 7,000.

“The colonial authorities … knew that would spread smallpox throughout British Columbia,” she says. “That was an act of genocide against Indigenous people. … At that point in time the [government] wanted to be able to claim those lands without having to compensate or recognize Indigenous title.” 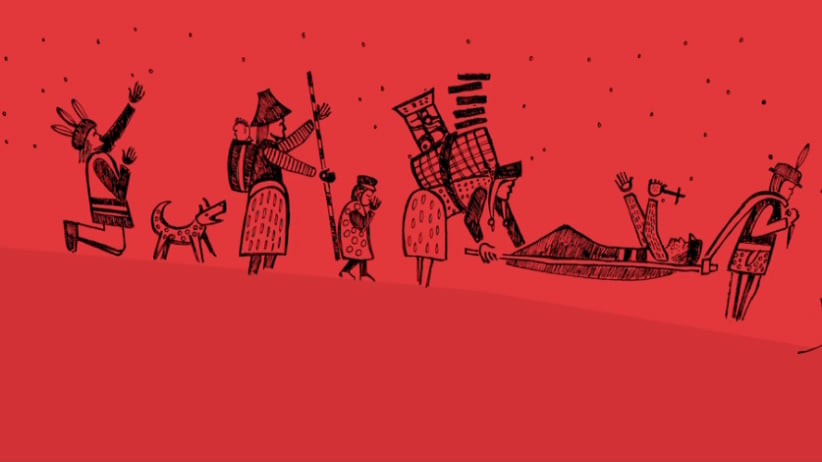 That thinking—that the colonial response was part of an active land grab as opposed to a tragedy they made much worse and took advantage of—is pervasive. And while there is no concrete evidence of it, historian Robert Boyd did argue in his landmark book The Coming of the Spirit of Pestilence that “the Whites knew” the epidemic was avoidable, and that it “paved the way for the colonization of their lands by peoples of European descent.” The Colonist even reported at the time that First Nations were worried that Governor James Douglas “was about to send the small pox among them for the purpose of killing off the tribe and getting their land.” (Douglas dismissed this at the time as a hoax.)

Taken together, the smallpox response, the creation of the residential school system, and a ban on the potlatch—a tradition that helps pass on oral histories—have been seen by Indigenous people as efforts to force them to “accept the colonial grand narrative that British Columbia acquired Indigenous lands fairly and in a legal manner,” says Nicholson.

The 1862 smallpox epidemic wasn’t the first to rage across the region post-contact, but it was the first in the colonial era. “The significance of the 1862-1863 crisis lies in the presence of a rapidly expanding white population—this was the factor that was different,” says Maureen Atkinson, a historian from Terrace, B.C. “If the Fraser River gold rush and then the Cariboo gold rush had not happened then I think there might have been a different response, perhaps, in the colonial government’s approach to Indigenous peoples.”

These newcomer numbers surged as Indigenous populations fell by as much as 90 per cent in some areas. Geographer Cole Harris reports in The Resettlement of British Columbia that by 1863 in southeastern B.C., large areas were “almost completely depopulated,” and that census-takers on the north coast found the Haida had fallen from a pre-epidemic count of 6,607 people to only 829 in 1881.

Whether or not smallpox began as a colonial conspiracy, settlers started occupying the flat, fertile land that was left seemingly abandoned as devastated Indigenous communities consolidated with hopes of later returning home, says Lutz. “A lot of First Nations village sites were lost to that.”

A belief in terra nullius, or the settlement of “empty land,” spurred land commissioner Joseph Trutch in 1864 to refuse recognition of Indigenous title, kiboshing treaty-making and reducing reserves mapped out pre-epidemic by 92 per cent. “The Indians have really no rights to the lands they claim,” he argued, doling it out instead to settlers, miners and loggers.

That’s why, unlike the rest of Canada, the bulk of B.C. is built on disputed, unceded land; there are almost no treaties establishing rights. In accordance with the Royal Proclamation of 1763, Governor Douglas had earlier signed 14 treaties on Vancouver Island until a funding conflict between the Crown and the colony postponed progress and, in the face of the smallpox crisis, treaties became a low priority. “There was this pervasive belief that this was a dying race and the smallpox epidemic seemed to confirm that. So essentially treaty-making was abandoned as a result,” says Lutz.

One Indigenous nation, though, did fight back in defence of its land. In 1864, the Tsilhqot’in declared war after being threatened with smallpox by the foreman of a road being built through their territory. This battle, the Chilcotin War, ended with the hanging of six chiefs, an act that then-premier Christy Clark apologized for in a 2014 speech that acknowledged that “there is an indication [smallpox] was spread intentionally.”

With First Nations still too weakened to resist, post-Confederation B.C. continued the colonial policy of Indigenous erasure even as “numbered treaties” were being negotiated in other new Canadian provinces.

But denying land title didn’t extinguish it, according to a 1973 Supreme Court ruling on a century-long treaty effort by the Nisga’a, which was only finalized nearly 30 years later. That inspired the B.C. Treaty Process in the 1990s, which has proven similarly glacial, partly because it doesn’t put jurisdiction truly on the table.

So the Tsilhqot’in lawyered up. And in 2014, the Supreme Court gave them title to 1,900 square kilometres near Williams Lake, setting a precedent in a province where most land is similarly contested.

“If one applies generally the principles of the Tsilhqot’in title case, British Columbia is a province unlike the rest in that it owns comparatively little of its natural resources,” says Tom Swanky, a Quesnel, B.C. author of books that allege that the epidemic was a “war of extermination” for land.

Without smallpox, B.C. would look like the numbered treaty provinces, Swanky believes. “The Crown eventually would have purchased native title, little by little or territory by territory, as needed and, under the Canadian system, the province now would have had some more understandable claim to resources.”

While Indigenous consent is an issue across Canada—the Supreme Court recently ruled on the Crown’s duty to consult Indigenous people on development projects—few First Nations have as much leverage today to address environmental and economic concerns as those in B.C. because treaty-less land is in legal limbo; governments can still overrule opposition, but now must prove “development is pressing, substantial and meets the Crown’s fiduciary duty.”

“The thing that bothers me the most as a descendant of this history is how unjust all of it is,” Nicholson says, explaining how her smallpox-reduced Kingcome Inlet community—“where we lived for thousands of years”—saw their land taken. But, she adds, “Indigenous peoples, while suffering tremendous losses, still survived. And their land title remains intact, which continues to be a problem for British Columbia and the resource-extractive projects they wish to push through within those contested lands.”

But with B.C.’s new Green-supported NDP government committing to the UN Declaration on the Rights of Indigenous Peoples and the Tsilhqot’in Supreme Court decision, perhaps justice will one day be served. At the very least, we should acknowledge that the province we know today was, by many accounts, founded on the back of a potentially avoidable epidemic.