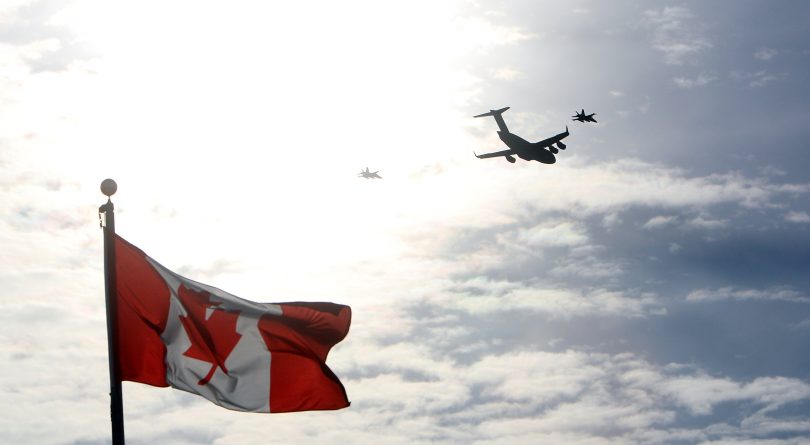 The plane carrying the last of Canada's troops in Afghanistan is escorted through the air by fighter jets, after the last Canadian troops from Afghanistan returned to Ottawa International Airport on March 18, 2014 in Ottawa, Ontario. (Cole Burston/AFP/Getty Images)

Sometimes a government tweet that goes viral takes several months of planning. Sometimes it takes only hours. That’s how long the Canadian military spent crafting a tweet encouraging transgender Canadians to enlist in the Armed Forces.

Last July 26 at 8:55 a.m., U.S. President Donald Trump tweeted that after “consultation” with generals and experts, the U.S. would “not accept or allow Transgender individuals to serve in the U.S. military.” Trump cited “tremendous medical costs and disruption,” claims that were widely debunked in the aftermath of the three-tweet announcement. (This past March, the White House followed up with a memo that ordered the ban.)

Canada’s military feels differently. Emails obtained via the Access to Information Act show that a social media advisor at the Department of National Defence fired off an email to a superior two hours after Trump’s apparent policy announcement last summer. “If you have a quick minute to chat, I’d like to discuss putting out an unscheduled diversity recruitment posting today,” he wrote. Twenty minutes later, he followed up with draft text for a tweet. Ninety minutes later, the boss replied: “No issues … great initiative!”

A couple of approvals later—someone along the line whose attention may have been elsewhere asked, “Why today?”—and the tweet was live at 3:09 p.m.

The most-liked response to the tweet was a gift to the Trudeau government. “Beautiful Country, beautiful people, beautiful social laws and a great PM,” read a reply with 1,500 likes. Another tweet questioned the Canadian military’s apparent politicization of an announcement south of the border. “You guys really think you need to publicize and promote this? You’re supposed to be soldiers. Not politicians or politically correct,” read one reply that garnered 860 likes and 90 retweets.

Earlier that afternoon, a departmental official sounded a precautionary alarm in an email to colleagues. “The timing of such a concerted effort [with respect to] a contrary announcement south of us is interesting and could be seen as political,” he wrote. In a later email, however, the same official was effusive in his praise. “This was an inspired effort put forth by CAF social media … It will certainly be an asset to our efforts to promote the CAF’s commitment to embracing diversity.”

Canada’s military faces clear challenges, including a well-established history with sexual violence and an environment that doesn’t make it easy for women to break through the glass ceiling. But as Maclean’s reported last year, transgender people may serve in numbers disproportionately higher than their general population—and the forces have had a trans policy in place since 2012.

The evening after the tweet that went viral, the official who applauded the effort sent the staffer who’d drafted the tweet a note. “High five! Was that all your idea? Well played.” He later added: “Can I get your autograph?”

The staffer acknowledged the mixed reaction to the post in some corners. “I know it’s not everyone’s cup of tea but I’m certain there was a traffic spike to the web tonight,” he wrote.

At 9:42 p.m., the staffer’s correspondent offered the final word. “It was risky. And no, not universally embraced, but it’s congruent with who we are trying to be. I firmly believe that a little tension expedites progress.”

The posts generated 5,000 clicks for the military recruiting website. And all thanks to Trump’s need to lash out.