How Ontario is failing to help stop opioid deaths

Unlike in B.C., the province is not distributing life-saving naloxone kits in ERs, even as pharmacists run short and the death toll rises 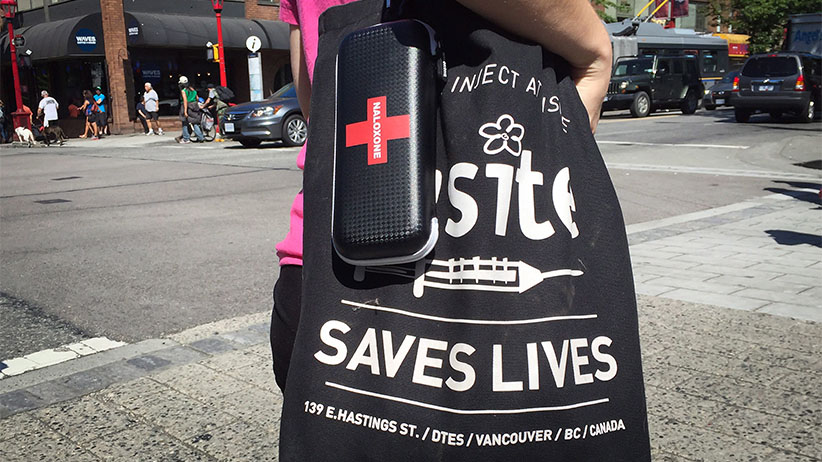 A woman carries a naloxone kit and a bag from Insite, the safe injection site, while walking in the Downtown Eastside of Vancouver, B.C., on Wednesday July 27, 2016. (Darryl Dyck/CP)

Each kit consists of two vials of naloxone, a pair of devices for opening the vials, two syringes, a pair of gloves and an identifier card for the person carrying the kit. If an overdose occurs, any bystander equipped with a kit can administer naloxone, which blocks the effects of opioids like fentanyl, and perform CPR until paramedics arrive.

“By fall 2016,” said the agency’s press-release, “all 14 urgent care centres and emergency departments in the [Vancouver] region will have naloxone kits in stock for nurses and doctors to give to patients to take with them upon discharge.”

More than a year later, emergency rooms and urgent care centres in Toronto—which is facing its own deadly opioid crisis—have failed to follow suit.

Providing naloxone kits to patients who have had an overdose makes sense, and it’s a core tactic of British Columbia’s provincial government: these patients are at particularly high risk of overdosing again once they leave the hospital, so getting naloxone in their hands should be a top priority.

It seems to be working: according to data from the B.C. Centre for Disease Control, the number of naloxone kits distributed in their province soared from 3,392 kits in 2015 to 21,945 in 2016. More importantly, the number of times these kits were used in the community to reverse actual opioid overdoses rose from 427 instances in 2015 to 4,231 in 2016, representing thousands of lives potentially saved.

In Toronto, patients are still routinely sent home from emergency rooms and detox centres without naloxone kits, and many doctors fear that this oversight is a major contributor to the concerning number of opioid-related deaths in the city. There were 186 opioid-related deaths in Toronto in 2016, representing a 33 per cent increase from 2015. Many health professionals, politicians and drug users expect the 2017 totals to be even higher.

“The number one issue right now is around naloxone distribution,” says Dr. Hasan Sheikh, an emergency room doctor and addictions specialist in Toronto. “We need to get naloxone into the hands of people who need it…drug users, their friends and family, and frontline health care providers.”

“Detox centres are an incredibly high risk place for people to relapse and overdose, because the patients have lost tolerance and then they go out and use drugs again,” said Sheikh. “We’ve got our detox staff trained on [naloxone], but we’re still trying to figure out how to physically get them the naloxone, and who is going to pay for it.”

Ontario’s Ministry of Health recently announced that it intends to fund the distribution of naloxone kits in emergency rooms and detox centres, but it hasn’t provided a clear timeline.

“One of the things that the government talked about was distributing naloxone through the ER,” said Sheikh. “But as the medical lead on an addictions project out of the ER at one of the largest hospitals in the province, I still haven’t heard anything…there’s not as good communication as one would hope.”

David Jensen, a spokesperson for Ontario’s Ministry of Health and Long-Term Care, says that they have plans to distribute naloxone kits to patients in emergency departments, but they won’t be implementing the program until the 2018-2019 fiscal year, which begins in April.

Many doctors worry about this delay. “People who use drugs are marginalized. They may not be comfortable going to a pharmacy or calling 911,” said Dr. Aaron Orkin, an emergency room doctor and researcher at Mount Sinai Hospital in Toronto. “Naloxone kits need to be given at the point-of-care, not just at pharmacies and harm reduction sites.”

Currently, hospitals and pharmacies in Ontario don’t have the same funding streams for naloxone: when a pharmacy provides a patient with a naloxone kit, it gets reimbursed for the cost of the kit by the provincial government, whereas a hospital has to pay for each naloxone kit out of its individual hospital budget. Injectable naloxone kits can cost anywhere from $23 to $48 per kit, depending on the supplier and the quantity being purchased.

“Hospitals have a financial disincentive to stock naloxone kits,” said Dr. Michelle Klaiman, an ER physician and addictions specialist in Toronto. “They have to purchase it out of their normal hospital budgets. They don’t have a separate fund for it.”

At the moment, the easiest way for most people to get naloxone in Ontario is to go to a participating pharmacy. But earlier this year the ministry of health stopped directly supplying pharmacies with pre-made kits. The government now wants pharmacies to contact naloxone suppliers directly and to make their own kits in-house, with the cost covered by the ministry.

Not all pharmacists are happy with this development. “The biggest thing is the supply issue,” said one pharmacist, who wished to remain anonymous. “We don’t have the pre-made kits…I’ve had to turn a few people away. At this point we’re just putting together our own make-shift kits, we’re doing the best that we can.”

This added step might also prove to be a disincentive for pharmacists. “Now they want us to make our own kits instead of sending them out. But personally I think what they want in the kits is too much,” says Richard Mitchell, a pharmacist on Bay Street in Toronto.

“We only get six naloxone kits per week from our supplier,” said Ximena Castro, a pharmacist assistant at Shoppers Drug Mart on Bloor Street in Toronto. “We run out quickly…I’ve already turned away two people today because we just don’t have any.”

Without a centralized distribution platform from the provincial government, there are inconsistencies in the pharmacy-based distribution of naloxone kits. Tianna Costa, a pharmacist at the Centre for Addictions and Mental Health in Toronto, says that hospitals like hers usually have strong contracts with naloxone suppliers but that smaller, independent pharmacies might not have access to the same contracts. Independent pharmacists often have to call their supplier to order more naloxone once their supplies run out, and this can lead to delays.

Costa hasn’t had any trouble stocking naloxone because her hospital has made it a priority. Not all pharmacies necessarily share this approach.

With no definitive timeline in place for the arrival of naloxone kits in Toronto’s emergency rooms and detox centres, those seeking access to the kits will have to hope that pharmacies stay well-stocked.

Dr. Conor Lavelle is an emergency medicine resident and a Fellow in Global Journalism at the Munk School of Global Affairs at the University of Toronto