Record spring floods soaked many a home movie and heirloom photo. Fortunately, the experts were standing by. 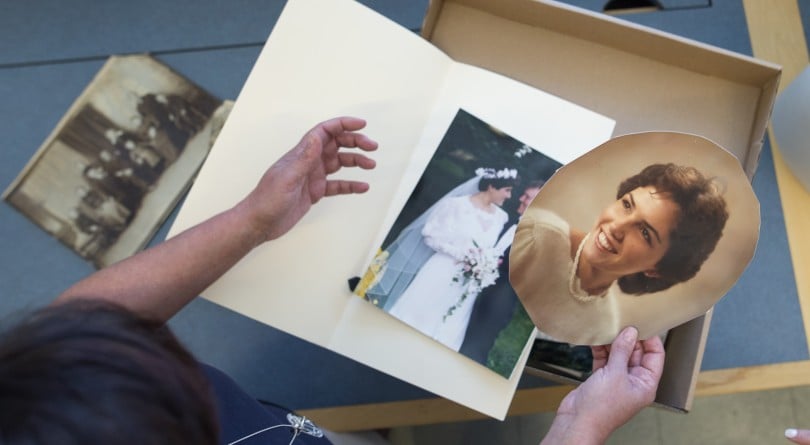 Alana Gorman holds one of her wedding photos as she goes through recovered family photos damaged in the flood at the Provincial Archives of New Brunswick in Fredericton, N.B. on Thursday, May 24, 2018. (Photograph by Darren Calabrese)

On a recent sunny morning, after the St. John River floodwaters had finally receded, Ruby Henry arrived at the Provincial Archives of New Brunswick with a plastic grocery bag, hopeful yet anxious.

Inside the bag were 10 soggy boxes of 8-mm home movies that immortalized her family’s life: Christmas of 1965 when her daughter Lisa was a baby, gleefully tearing wrapping paper as her parents looked on. The New Year’s Eve party of 1967 when she shared a kiss at midnight with Glenn, her beloved husband of 58 years who died in 2015. Her energetic horse-riding days which foreshadow the spunk she still exudes at 80—even when facing the near destruction of her Scotchtown, N.B. home due to this spring’s epic flood.

“It’s a little piece of us,” says Henry, about the sopping home movies her daughter pulled from underneath the stairwell of her home. “I thought, ‘Oh, that’s the last thing’—there seemed to be so many things that I’m losing. So I was really tickled when I heard the archives might be able to do something.”

The Provincial Archives has quietly offered document recovery services to the public for many years, but this spring, the government promoted it as part of its recovery services due to this year’s historic flood that saw 1,400 people displaced from their homes and led the province to call in the army.

RELATED: Disaster politics and the floods of 2017

Roger Melanson, president of the provincial treasury board, which is responsible for the archives, described the recovery of precious documents as “a small but important part” helping affected New Brunswickers recover from the flood.

At the three-storey brick archives building in Fredericton, Henry’s home movies landed in the hands of preservation technician Kim Macguire. Within an hour, Macguire had removed the film from the damp boxes, partially unreeled it and set it out to air dry on horizontally-stacked trays in the basement of the building. Immediate action, says Macguire, is key: “Water causes so much damage. It’s not something that comes in and you can work on it at a future time.”

Some parts of Henry’s film appeared obviously affected, with blots of the maroon-coloured emulsion blurring the images. Sadly, Macguire says she can’t reverse the effect once the damage has been done. “Once it’s gone, it’s gone. We’re just trying to salvage what’s still watchable because losing some of it is one thing; to lose it all is another.”

Localized springtime flooding is a regular occurrence in these parts of central New Brunswick when heavy rain combines with melting snow leading the swollen St. John River and its tributaries to spill their banks. But this year, nobody could have predicted the scale of wreckage. It was the worst flooding for many communities since 1973, said a provincial Emergency Measures Organization spokesman, meaning many others, like Alana Gorman’s family, were caught off guard. 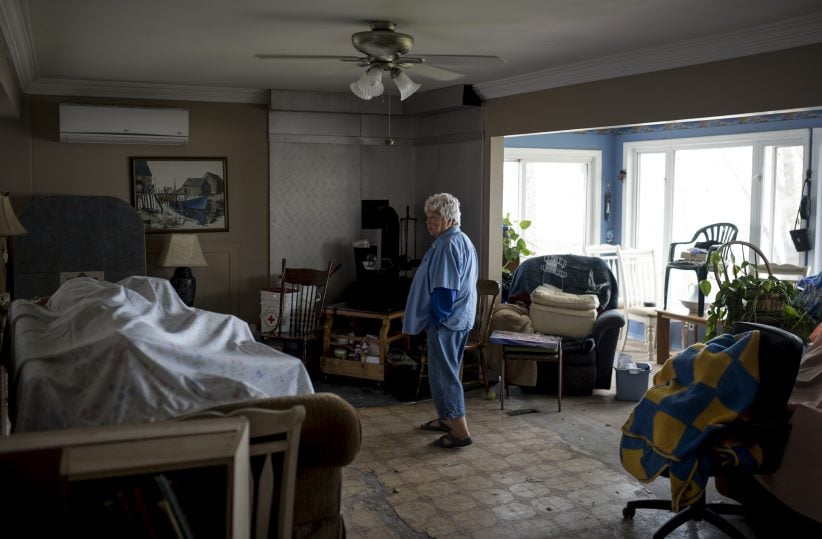 Even though their home in Maugerville, outside Fredericton, had been raised four feet and sat on a hill, overflow poured into the basement, causing untold havoc. Gorman’s 73-year-old mother Heather Mulder still lives there, in the home of Gorman’s childhood. The deluge soaked heirloom Christmas decorations, her late father’s funeral guest book and family photo albums that include historic portraits of the Mulder family’s long line of butchers. Gorman’s childhood photos, her late father giving her away on her wedding day, photos of their native Holland being liberated during the war and a letter she wrote to her grandfather as a girl were all exposed to the water. “This is our history in a box,” says Gorman, poring over the photos. “I was helping mom, and she said ‘The only thing I care about is my pictures. Some of the things we can replace, but not these.’

She too had heard about the archives’ offer and delivered to Macguire a vintage blue suitcase filled with 200 curled and blurred photos. When overloaded with recovery requests, Macguire will sometimes resort to using industrial freezers set up as stopgaps to hold the surfeit of documents or audio recordings. (So far, none from the flood have had to be frozen.) Freezing the documents prevents additional deterioration, she explains, so that “five months down the line we can pull it out, thaw it, do the work that needs to be done.”

She got to work quickly on Gormans’ pictures, laying them out and gently dabbing with paper towel to remove moisture from the water-speckled images. Next, Macguire sandwiched the photos between pieces of blotting paper and two one-inch square pieces of plywood, weighting them with large books. She switched out the blotting paper every 10 minutes, then changed it every half hour, and finally left it overnight to press the photos into their original shape.

“We’ve all dropped books in bathtubs or spilled glass of water on pieces of paper,” says Macguire, “and they curl up when they dry, so the boards distribute the weight.”

The recovery took about 20 hours, and while the overall result isn’t perfect—one family photo of Gorman’s grandparents and all their children was lost; others are permanently blemished—most were recovered, to Gorman’s delight. “You could hardly recognize them,” she says. “I’m going to surprise my mother with these for her birthday.”

Ruby Henry, too, got some much-needed good news. As she worked alongside volunteers tackling the black mould infestation in her home, she learned 90 to 99 per cent of the film had been salvaged. The movies, she says, are a “tether” to her past, and preserving them “leaves something for the kids to have when years come by. It’s just very heartfelt and very awesome to think that they were saved.”