How to kill the Trans Mountain pipeline

Opponents of Trans Mountain amass, with some eyes alighting on Lightning Rock—which could prove to be a lightning rod, akin to Standing Rock 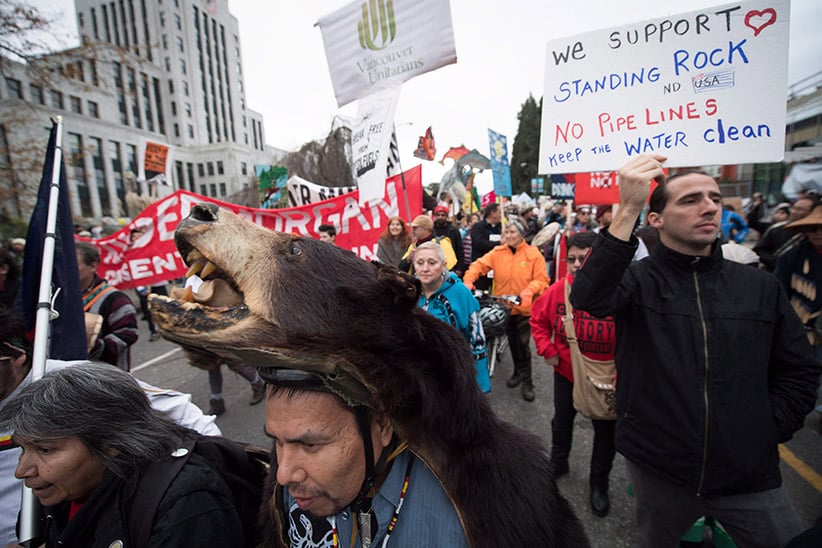 More pipeline protests are in the works, with promises of civil disobedience. (Darryl Dyck/CP)

Lightning Rock has long been sacred to the Sumas people of B.C.’s Fraser Valley—a site where a shaman was thought to have transformed into a giant boulder before getting blasted into four pieces by a bolt from an avenging thunderbird. In the 1780s, perhaps as a show of deference, the Sumas interred victims of smallpox around the stone, creating a 12-hectare burial ground they’ve recently scrambled to preserve. Two years ago, they fought off a proposal for a massive business and residential development on the site. “Basically,” says Chief Dalton Silver, “we’re just trying to protect the place.”

Now, as pipeline opponents in the U.S. celebrate their triumph in North Dakota, Lightning Rock may be headed for a much larger stage. Not only is the name reminiscent of Standing Rock, where the movement to halt the Dakota Access oil pipeline got started, it’s one of the few sites authorities in this country acknowledge could be threatened by another, equally contentious petroleum project: the planned twinning of the Trans Mountain pipeline from Strathcona County, Alta., to Burnaby, B.C. Last May, the National Energy Board referred to Lightning Rock by name when it set down 157 conditions for the 1,150-km expansion, calling for archaeological and cultural heritage assessments of the area around the fractured boulder.

What would happen if surveys unearth artifacts or human remains isn’t clear. The NEB’s conditions require the pipeline’s owner, Kinder Morgan, to do little more than consult with the Stó:lo Collective, which includes the Sumas First Nation, and to document efforts to address their concerns. But for the array of Aboriginal groups, environmentalists and political leaders now aligning against the $6.8-billion pipeline, the rock’s mere existence seems a gift. Since Prime Minister Justin Trudeau announced cabinet approval of the pipeline last week, everyone from Green Party Leader Elizabeth May to an 84-year-old grandmother in Burnaby has declared their willingness to get arrested trying to stop it. At times, one gets the sense that all they need is a time and place, and with Kinder Morgan preparing to break ground next fall, the time is drawing near.

As for a place, the pipeline’s planned route runs next to the Lightning Rock area, where archaeologists have documented at least 40 grave mounds, raising concerns that Kinder Morgan’s crews could disturb more remains on adjacent land. Says Silver dryly: “We don’t go digging around where our ancestors are buried.”

Symbolism will be important in this battle, because many of the legal avenues to stopping the project were closed off 60 years ago, when the existing pipeline was built. With the right-of-way established, Kinder Morgan requires few easements from landowners or governments facing pressure to protect Crown land—something that has proven insurmountable for recent pipeline projects. What’s more, the company boasts relationships with First Nations along the route that date back decades, which has helped it win over those communities to the proposed new phase.

For the Liberals, clinging to their credentials as friends of the environment, the optics won’t be easy. But the “twinning” model at least spares them a barrage of media images of crews clear-cutting through pristine forests or blasting alongside crystalline rivers.

Still, anyone who thinks the battle is over—or properly under way, for that matter—is in for a nasty surprise. Trudeau had hardly finished his announcement when outraged environmental groups promised to stop it in the name of protecting the planet, pointing out that a twinned Trans Mountain would triple the volume of oil reaching Kinder Morgan’s terminal in Burnaby to 890,000 barrels per day. And for every First Nations leader willing to negotiate with Kinder Morgan, more seem to share the environmentalists’ anger. In a newspaper op-ed that ran Monday, Grand Chief Stewart Phillip of the Union of B.C. Indian Chiefs accused Trudeau of failing a “sacred duty” to protect the environment and the land rights of Aboriginals.

MORE: What Canada’s new pipelines will look like from the sky

Phillip made headlines two years ago when he was arrested at Burnaby Mountain during a demonstration against the Trans Mountain project, and the roster of public figures willing to engage in civil disobedience seems to expand by the day. Vancouver Mayor Gregor Robertson has promised to demonstrate, while Derek Corrigan, Burnaby’s left-wing mayor, is on the record saying he’d “stand in front of the bulldozers” (the 65-year-old massaged that quote last week, describing it as a “symbolic” expression of his opposition).

Whatever their level of resolve, these leaders represent the kind of so-called “direct action” coalition that proponents of the pipeline would do well to fear—especially after the intervention of First Nations, environmentalists and assorted sympathizers proved so effective at Standing Rock. There, a polyglot movement in support of the local Sioux has over the past two years blocked construction, tangling with police and, in a euphoric victory last week, forcing the U.S. Army Corps of Engineers to scrap plans to run the Dakota Access pipeline under a Missouri River reservoir. Such alliances have proven no less effective in Canada, as when Indigenous protesters joined forces with environmentalists on Vancouver Island in the 1990s to curb the logging of old-growth trees in Clayoquot Sound.

Small wonder, then, that elected leaders and oil execs alike are striving to keep Trans Mountain from becoming Standing Rock North. Jim Carr, the federal natural resources minister, flew into damage-control mode after musing during a speech about calling in police and the military on unruly pipeline protesters (on a tour of weekend talk shows, he insisted the remark was not meant as a threat). Rachel Notley, Alberta’s NDP premier, flew to B.C. to talk up the project’s economic importance in the province where opposition to it is strongest. Kinder Morgan CEO Ian Anderson, meanwhile, pleaded with opponents to protest “in a peaceful, lawful manner,” telling reporters on a conference call that safety was the company’s “number one and unwavering priority.”

Truth be told, the legal avenues haven’t been exhausted. The David Suzuki Foundation, for one, is planning to challenge approval of the pipeline under the federal Species at Risk Act, arguing that the 34 tankers sailing into Kinder Morgan’s terminal each month would harm killer whales in the Salish Sea. The legislation calls for mandatory protection once a threat to a population is scientifically established, notes Jay Ritchlin, director-general for the organization in Western Canada.

Others anticipate resistance when local governments begin considering permits necessary for construction on municipal lands. Dinara Millington, vice-president of research at the Calgary-based Canadian Energy Research Institute, points to Burnaby, where crews must expand a storage facility, as a likely point of delay. If Corrigan, the mayor, holds sway, she notes, “they could definitely delay the day the pipeline goes into operation.”

How long opponents can string such gambits out, and whether Kinder Morgan can persuade the courts that it has addressed ecological challenges, might not matter. When the process-based manoeuvres have run their course, all eyes will turn to places like Lightning Rock, which Silver, the Sumas chief, can easily imagine becoming the focus of a Dakota-style stand. His people will demand a say in anything that happens near the site, he says, and even then will watch every bucketload of earth for signs their ancestors’ resting place is being disturbed. If their wishes are swept aside, Silver adds, you can expect to see them in the path of an excavator: “As I’ve said before to developers, you start coming in with your equipment, we’ll be there to meet you.”