In defence of equalization

Stephen Maher: It is a dangerous mistake to view Canada as a piggybank into which some provinces make payments and others withdrawals 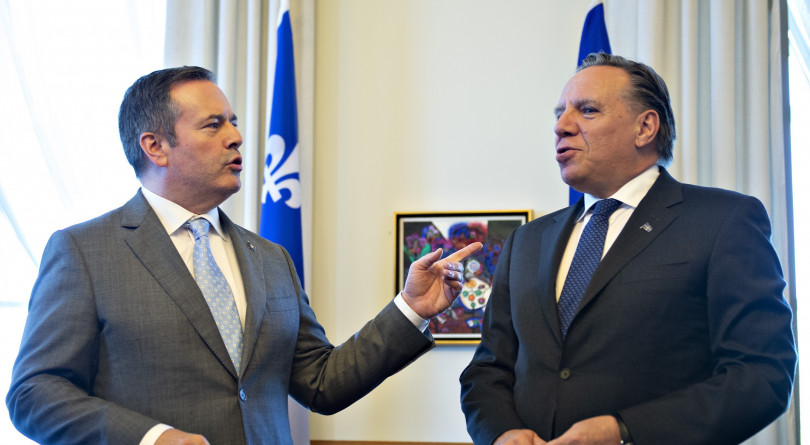 Hugh and Sybil Forbes were living in a trailer park on the outskirts of Fort McMurray when I met them.

I was in Alberta looking for Nova Scotians who had gone down the road to work in the oil fields of Fort Mac, the restaurants of Calgary and the office buildings of Edmonton, so that I could write about the Atlantic diaspora for the Chronicle Herald.

Maritimers are accustomed to waving goodbye to kith and kin, people who want to stay but must leave because of the lack of opportunity, the prospect of a meagre, uncertain income patched together from seasonal work and pogey balanced against a more prosperous life far from home and family.

So Martimers leave, like Hugh Forbes did, after the steel mill and coal mines shut down in Sydney and there was no work for crane operators. Hugh spent years chasing work around Canada while Sybil stayed home and raised the kids.

He eventually found good pay in the bitumen mines north of Fort Mac, but didn’t want to live, a 60-year-old man, bunked with strangers in a camp.

This was in 2006, when the economy of Fort Mac was smoking hot, so hot that businesses would sometimes have to shut down for lack of workers, and nobody could find a place to live.

“I came out last summer for a while,” he told me as we sat in the RV. “But we’re just getting to the point where we’re getting tired of living away from one another. I’ve spent so much time away from home. It’s a hard life.”

READ MORE: Why so many Albertans are giving up on their country

So Sybil went out to join him and they bought a Cypress Fifth Wheel and parked it in next to a river, in a nice trailer park with grass and picnic tables and flower beds. It wasn’t easy, but they were together.

“It takes a very strong type of relationship to get you through,” Sybil said. “Your kids have to recognize that they have to belly up, too. There’s a realization for everybody. Nothing in life is free. We can work it as a unit, and hopefully at the end of it all, come out well and healthy.”

The  Cypress Fifth Wheel by the river was like a drop-in centre and a hostel for wandering Capers. The Forbes helped find jobs for other people from home and often had friends and relatives staying over.

I was impressed by their good humour, their hospitality, their adaptability and their wit. Life had been tougher for them than it is for most people, but they were getting by, doing their best to look out for one another and have a laugh when they could.

I’ve been thinking about the Forbes during the recent debate, if you can call it that, about equalization.

After an election that turned out badly for them, angry Albertans and Saskatchewanians have been complaining about the transfer of money to other parts of the country.

They point out that Albertans foot the bills—paying in $240 billion more than they received in benefits over the last 11 years. It’s too much, they say. Enough is enough. It’s time to reform equalization. Some angry, unrealistic people are even using it as argument to take Alberta and Saskatchewan out of Canada and start a new country.

I have been waiting in vain for someone, like the prime minister, for example, to point out that this way of looking at the country—as if it is a piggybank into which some provinces make payments and other provinces make withdrawals—misses the point about what it should mean to be a Canadian.

I know that westerners are angry, that they have reason to be angry, but I don’t believe they are right to be angry about equalization.

The fiscal imbalance that Westerners complain about does not exist. Alberta doesn’t pay a cent to other provinces, and the people in Quebec and Atlantic Canada are not welfare bums.

Federal taxpayers in Alberta pay into equalization, as they pay into employment insurance and other federal programs. In this, they are the same as the rest of us. We all pay exactly the same amount, wherever we live in Canada, depending on our income.

A family doctor in Cape Breton pays more than a pipefitter in Grande Prairie because her income is higher. Over her career, she will contribute significantly more to equalization and other federal programs than the pipefitter, because those with higher incomes pay more tax.

Alberta, in spite of its recent economic difficulties, remains one of the richest parts of the world, so its residents pay more federal tax than people in poorer provinces.

Equalization gives poor provinces a top-up from taxpayers across the country, so that provincial governments can provide roughly equivalent levels of service.

It’s based on a complicated formula that measures the “fiscal capacity” of all the provinces, not the actual revenue they take in. The payments are made on the basis of the revenue each province could raise if they had similar tax policies, which they don’t, and shouldn’t.

One of the strengths of our federal system is that it allows the provinces, which vary greatly, to follow their discrete destinies. Albertans, who are more like Texans than the French, want lower taxes. I think they would be better off with a sales tax, but why should they care what I think? Let them suit themselves.

Quebecers, who are more like the French than like Texans, want higher taxes and more social services, so they have them. They get more services — subsidized daycare and so on — because they vote for them, and pay higher taxes. That looks insane to Albertans, but who cares? It suits Quebecers.

But Westerners often complain that they are paying for goodies for Quebecers, a distortion encouraged by vote-seeking politicians.

Equalization is often misrepresented for political reasons, according to the five authors of  Fiscal Federalism and Equalization Policy in Canada, a surprisingly breezy book about the program.

The “lack of public understanding is related to the inner complexity of the program as well as the inflammatory rhetoric that surrounds it, a situation stemming at least in part from the size of the transfers and ongoing political struggles over power and influence.”

The book was published in 2017 but the authors could have been talking about Alberta Premier Jason Kenney, who, last week, having just introduced an austerity budget, angrily denounced the equalization system in an attack on Bloc Quebecois Leader Yves-François Blanchet.

“These statements being made a week after Quebec tabled a budget with a $4-billion surplus thanks to a $13-billion equalization payment from Ottawa, which came from the workers that many of you had to lay off,” Kenney told oil and gas executives.

But Quebecers pay more into equalization than Albertans do, because there are more Quebecers. Kenney likely knows that because he is famous for knowing his files, and he was part of the cabinet that established the current equalization formula—based on a report by Al O’Brien, former deputy treasurer of Alberta—in the government of Stephen Harper, who was the MP for Calgary West.

Kenney didn’t complain so long as the Conservatives were enjoying the political benefits of the system. Now that the Liberals are handing out the cash, it looks different to Kenney. His complaints are plainly hypocritical and opportunistic.

Alberta is dealing with an oil-price shock, which means foreclosures and bankruptcies are spiking, and a lot of people are coping with suddenly diminished prospects, which, understandably, makes them angry. Kenney campaigned on a promise to turn things around. Since he doesn’t control the price of oil, he can’t deliver. He has to blame someone. Quebec is a traditional favourite.

And it’s true that Alberta doesn’t get any money out of equalization. Some provinces—Quebec and the Maritimes—get money every year. The other provinces get money some years but not others, depending on the price of potash or the market for auto parts.

Alberta hasn’t got a dime from the program since 1964, because its fiscal capacity is always so much higher than other provinces.

But one of the things Alberta gets from other provinces is people: educated, working-age people, like the Forbes, who spent years in Alberta and are now back in Cape Breton.

I called them this week and was sad to learn that Hugh, who was a vital, twinkly-eyed laughing man when I met him, now has Alzheimer’s disease. Because of family issues and health problems, he and Sybil never got to drive their RV to Mexico as they had dreamed of doing.

“It’s just one of those diseases,” Sybil told me. “You die a little every day. Another memory goes. But it is what it is and we try to take it one day at a time, and move on.”

Sybil has had serious back surgery. She looks after Hugh and her 90-year-old mother, who also lives with her. All of them rely on a health-care system with serious problems, the result of a shortage of family doctors in rural Atlantic Canada.

“They can’t get doctors,” Sybil told me. “Can’t get them to stay because they can’t pay them enough, or they don’t want to work in a rural setting.”

This is why I think equalization needs defending. The Forbes, whose working days are behind them, need health care. Nova Scotia, with serious demographic problems and no northern hinterland full of oil or minerals, can’t afford to provide that care without equalization.

The provincial budget of Nova Scotia is $11 billion. About $2 billion of that comes from equalization. The province spends $4.6 billion on health—about $4,735 per person.

Alberta spends $20.6 billion on health—about $4,790 per person, although its population is younger and more urban.

The Maritimes and Quebec rely on equalization to run their health and education systems.

It’s not a handout from Alberta. It’s something all Canadian taxpayers fund, because being Canadian should mean you get decent education and health care.

If you think we should stop doing that, if you think the Forbes don’t deserve decent health care after working their whole lives—even when it meant they had to live in an RV far from home—I am not sure what else to say to you.

Consider that Hugh and Sybil’s son has been 20 years working in Grande Prairie, paying taxes all the time. Consider that the have-not provinces keep educating young people only to see them take off for points west when they are ready to start working and paying taxes. Many of them come home to retire, at which point they become a burden on the health-care system.

This is part of what it means to have a country. We ought to be able to move around, following jobs or family or dreams, without fretting too much about whether the hospital back home is going to be able to provide the care that our loved ones need when their working days are done.

When angry politicians attack equalization, that is what they are attacking. Just because they are angry doesn’t mean they are correct.