Alberta's hurry-up corporate tax cut is less an investment in the future than a gift to the biggest current players, say experts 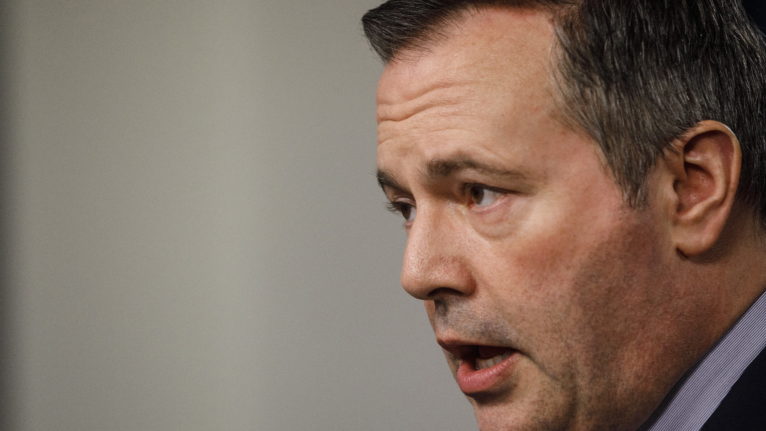 Kenney unveiled his plan on Monday to reboot Alberta's economy as the province emerges from the pandemic. (Jason Franson/CP)

Premier Jason Kenney, with his new economic recovery plan Monday, had some words to encourage those of us who despair that too many of Alberta’s eggs are in one black, tarry basket. His government has “sector-specific strategies” coming for forestry, tourism, aviation and more. Having shredded the former NDP government’s tech firm incentive programs—and some degree of sectoral confidence with it—Kenney promises bold, new startup incentive grants to replace them. And to finance this newfound bit of interventionism, Finance Minister Travis Toews casually discarded years of his United Conservative Party’s deficit-hawk dogma by noting a difference between “good debt” and “bad debt”—the sort of thing his crew would pillory Rachel Notley’s New Democrats for saying.

Kenney seemed most animated about his new rescue plan for his province’s recessionary economy when he was talking about his pitch to steal financial firms away from Toronto. As of Wednesday, Alberta’s corporate tax rate will fall to eight per cent, down three points from the current rate and 3.5 percentage points below Ontario’s.

“We’re going to be telling them they can save money for their shareholders, for their workers, for their operations, by relocating financial and fin-tech jobs to places like downtown Calgary and downtown Edmonton.”

RELATED: The end of Alberta exceptionalism—well, the part Jason Kenney never cared for

Why, Alberta’s premier was so convinced of his pitch that he declared firms would be “irresponsible if they don’t consider moving operations to Alberta.”

Reach for the stars, right? That seemed to be the goofy economic-development lesson of cities from Winnipeg to Hamilton, Ont. to Tucson, Ariz. when they launched flashy bids during that Willy-Wonka-meets-corporate-welfare dash for Amazon’s secondary headquarters. There was a period around 2006, when Alberta’s oil economy was rocketing upwards so quickly, and big firms like Imperial Oil had shifted their bases west, that a few starry-eyed observers wondered whether a Big Five bank would naturally follow and—gasp—maybe the whole axis of corporate Canada would come with it.

In that vein, it’s charming to see that optimism sparked again in a period when Alberta’s oil sector is at catastrophically low ebb. A few resource booms ago, being near the hard-chugging engine of the national economy may have been alluring enough to financial institutions to offset the inconvenience of being two time zones away from Bay Street and Wall Street. But now that Calgary has lost its lustre, Kenney’s Discount Zone pitch smacks of trying to woo a modern tech giant with oodles of free parking.

Before COVID, with so many of Alberta’s corporate offices vacant, the appeal of low office rents in high-quality buildings had become a big economic development pitch. Then the pandemic shifted how the world works, making corporations rethink their need for oodles of office space. Soon Calgary may not be alone with its hollow core.

The tax cut on corporate profits, meanwhile, does make Alberta the bargain-basement place to make big money in Canada. The problem is that Kenney announced last year he’d slash the rate to eight per cent by 2022—he’s simply moving it up a couple years. So this isn’t new information for anybody in Bay Street plotting a big move of employees that would take years.

“These are long-term, strategic thinkers. The minute the rate cut was announced they’d integrated it into their decisions,” says Philip Bazel, research associate with the University of Calgary School of Public Policy. Kenney’s team tends to dismiss criticism from the NDP that corporate tax cuts are mere plums for plutocrats, but rushing out the full tax cut all at once is a benefit for current players in Alberta, not future ones. “The decision to do it right away is giving a gift to firms that have already made investments and are earning profits on those investments,” says Michael Smart, a University of Toronto Economist. “The common practice is to avoid that giveaway or windfall gain to existing companies by phasing in that rate reduction over time.”

Why do it fast? Kenney says it’s to prove to investors Alberta won’t back down from its tax cut plans the way the United Kingdom did recently, or Saskatchewan did four years ago, or Ontario did way back in 2012. Another possible reason: Kenney cannot double down on the oil sector as he might have in the past, so he’s reaching for the familiarity of a key campaign pledge. It’s a policy that was supposed to take $2.4 billion from the provincial treasury when it was phased in; there was no immediate measure of what the all-at-once move will cost the already depleted Alberta coffers. (Meanwhile, those looking for child care or renewable energy in Kenney’s recovery plan will be disappointed; he may have a newfound appreciation for deficits but he’s still among Canada’s most resolutely conservative leaders.)

Kenney’s government calls it the “job creation tax cut,” citing pre-pandemic research predicting tens of thousands of  jobs would be created by new or relocated companies, as well as existing Alberta firms with more money to spend. With a cut so deep and quick, however, Smart foresees little new job creation but a lot of Ontario-based companies booking profits in Alberta to pay lower tax rates—shades of the “Quebec shuffle” that occurred in the 1980s when that province slashed corporate taxes to undercut Ontario. “Capital moves slowly; accountants move fast,” Smart says.

In the meantime, other premiers may be tempted to cut rates apace, creating a race to the bottom that nobody wins. But this is what happens when economic tides shift, and jurisdictions begin competing against each other for investments they might not otherwise get. For many years, the strength of Alberta’s fossil fuel-based economy allowed it to forego the economic-development competitions that other regions muck around with. With the resource-driven “Alberta advantage” greatly eroded, “race to the bottom” could become a new provincial modus operandi.

Alberta’s premier flashed another big-dollar item to an anxious public Monday—$10 billion in infrastructure, with echoes of the Harper government’s response to the 2008 recession. But $7 billion of that was already booked in Alberta’s budget, and a further $1.5 billion is already pledged toward the province’s new stake in the Keystone XL pipeline, the ever-in-peril Canada-U.S. bitumen conduit. Even when diversification is Kenney’s new watch-word, oil habits die hard.