Jason Kenney slashed the budget—hey, Trudeau made him do it! 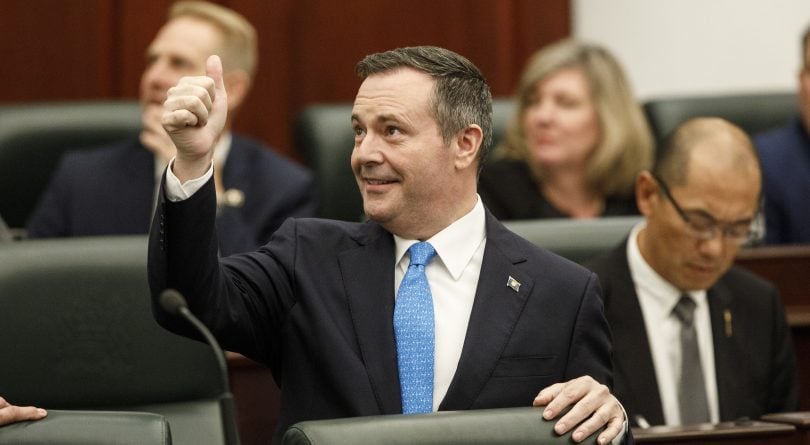 After this week, may we never again doubt Jason Kenney’s willingness to identify a crisis, stoke public sentiment around it and then take full advantage of it.

The Alberta premier timed it this way, of course—three days after Monday’s federal election, his first provincial budget to reshape Alberta in his United Conservative Party’s image.

Much of the earlier scrutiny of Kenney’s timing dwelt on how he wanted to hold off the various program spending cuts and public-sector jolts until after Oct. 21, lest they colour how Canadian voters rendered judgment on the federal Conservatives and Andrew Scheer. His government’s rhetoric in Thursday’s budget signals another motive: that Kenney figures he can leverage Albertans’ anger over another Liberal victory in Ottawa to win support for a fiscal plan that spreads pain widely around the public service sectors, and hints at more to come.

“In an uncertain world where we can’t rely on support from this federal government in Ottawa, we must be self-reliant,” Kenney said in a government-paid TV infomercial on Wednesday night. “We must put our own house in order so we are prepared for whatever the future may bring.”

In other words, his 14-minute advertisement during Global’s evening newscast—and his finance minister’s budget speech—sought to persuade hurtin’ ‘Bertans that university tuitions will rise and funding for cities must be cut in part because Justin Trudeau won’t somehow reverse the flow of equalization and give extra money to what remains a prosperous province.

He’s tenuously tying Albertan rage over the election to his budget, but also making sure the most cuts-heavy provincial budget since Ralph Klein’s in the mid-1990s would be overlooked by a public pre-occupied by its disaffection with Trudeau, anxiety about the future of the oil economy and what-if daydreaming about separation (mostly idle, thus far, it seems). To many, this budget is the Alberta premier’s secondary act of the week, after his response to the election results. Linking arms with Saskatchewan Premier Scott Moe, Kenney issued demands to re-tilt the federal equalization formula in the Prairies’ favour and to abandon the federal carbon tax—along with suggestions for how the federal Liberals can implement platform priorities of Scheer and the Alberta UCP.

Kenney is trying to show he’ll act on behalf of an embittered populace without giving voice to separatist sentiment—except through his plans for an expert’s panel on federal “fairness” and a series of public town halls. Details on those will come next week, but it sounds like they’ll serve as open-ended Festivus-like airings of grievances for loathers of Liberals.

After this budget, however, expect some gate-crashing of those events by unionized civil servants and Albertans with reason to care about the future of hospitals, post-secondary schools and other public services.

There was ample reason for an aggressive shakeup of the finances of Alberta, which boasts the largest per-person deficits in Canada. Spending had risen rapidly in the boom years and barely slowed in the years Rachel Notley’s NDP took over, as recession hit and oil royalties collapsed. Kenney’s government has spent months stressing that it’s solely a spending problem, not a function of Alberta’s low taxes (he’s actually cutting corporate taxes in a move intended to stoke investment but likely to bring revenue even lower).

RELATED: What the Liberals stirred up

The Alberta UCP is determined to balance its budget in time for its 2023 re-election bid, even if, Finance Minister Travis Toews said, a global recession or the cancellation of already approved oil pipelines add to the province’s financial woes. This government’s first budget sets out on that road with a four-year plan that cuts operating expenses by 2.8 per cent, or $1.4 billion between 2018 and 2022. That’s roughly $9 billion below where Alberta spending should be if this government stayed on the typical path of keeping pace with inflation and Alberta’s still-steady population growth.

They’ll pursue various trims in health care, and are hinting at a dramatically reformed education funding program next year. At the same time, they’ve laid down top-line budget projections that demand unions accept salary cuts throughout the public sector. The Alberta government’s staff rolls will decline by 7.7 per cent in four years, the budget projects, nearly 2,000 fewer positions.

Universities and colleges will have to cope with 12 per cent less in grants, with some schools hit harder than others. Post-secondary students get hit three times, with an end to a tuition freeze, the elimination of tuition tax credits and a hike beyond prime rate to student loan interest charges.

As with the snippy-snip Ford budget in Ontario, the public will discover the various cuts in the coming weeks and months. But for a preview of who will howl, do a word-search in the budget for “eliminate,” and learn that teens can kiss goodbye the provincial summer job program. Or “reduction,” which reveals that grants to the Calgary Stampede will sharply drop, and the province’s housing rental assistance program is getting a one-quarter haircut.

As this budget’s impact is felt throughout the province, various groups will lash out, as they have in Ontario. Kenney has signalled he’s lying ready to ignore those voices. “We are absolutely determined to deliver on that commitment to protect our finances, come what may. No number of protests or political attacks are going to push us off course,” he said in his budget preview infomercial.

Before the budget was released, the UCP government revealed how keen it is to surround itself with supportive voices. Officials invited to the media’s budget lockup included various “stakeholders” who could give reaction before the embargo lifted Thursday afternoon. It was all supportive voices: the taxpayer’s federation; business groups; oil-sector lobbyists. The labour organizations were kept out, made to wait in the legislature rotunda to express their frustrations later. There wasn’t enough space in the room, an aide explained. Not enough space for criticism.

Ford’s budget, and other shambolic missteps, have smashed his popularity in Ontario. Kenney’s support may take a hit in parts of Alberta (mainly, in the capital, Edmonton, which in the recent provincial election mostly rejected his party). But there’s a certain blood lust in Calgary and elsewhere, that the public sector should feel the pain that businesses felt. It extends to a national view: time for others to feel what Alberta’s going through.  You hear it on call-in radio shows to political forums, in downtown Calgary food courts, at family dinners. And soon, you’ll hear it in government-sponsored town halls.