For the first time, Jason Kenney will leave a leader's side to go to Alberta, where he'll try to emulate a throwback premier

At the top of Jason Kenney’s speech to launch his bid for the leadership of the Alberta PCs, he name-dropped two people. First was his mom. Second was a fellow named Andrew, an intern last summer in Kenney’s office who sang the event’s O Canada and recently became a citizen, which Kenney used as a springboard for his interpretation of Canada’s founding ethic of “ordered liberty” and free enterprise.

But that was all preamble before Kenney brought up the low-tax hero of the day’s oratory. “And then, lo and behold, the most remarkable leader emerged right here in Alberta. That man with a twinkle in his eye,” Kenney said. “The late, great Ralph Klein. Ralph, well, he did the impossible.”

Stephen Harper’s most dogged and loyal majority-builder, and his minister of defence, employment and immigration, continued at length about an Alberta premier that Harper was rather less fond of citing. Kenney recalled Klein’s deficit-busting, flat tax and service privatization, the hallowed “Alberta Advantage”—and that time Kenney was a twentysomething advocate for the Canadian Taxpayers Federation invited by Klein to the premier’s condo for a couple of beers and a policy briefing. The seven-premier Alberta PC dynasty’s third sovereign came up again and again in Kenney’s speech.

“We miss you Ralph! My goodness, we miss you!”

Klein left the premier’s office in 2006, and this mortal earth in 2013. But Kenney signalled Wednesday that he is set on a spiritual revival of his fellow gregarious conservative. 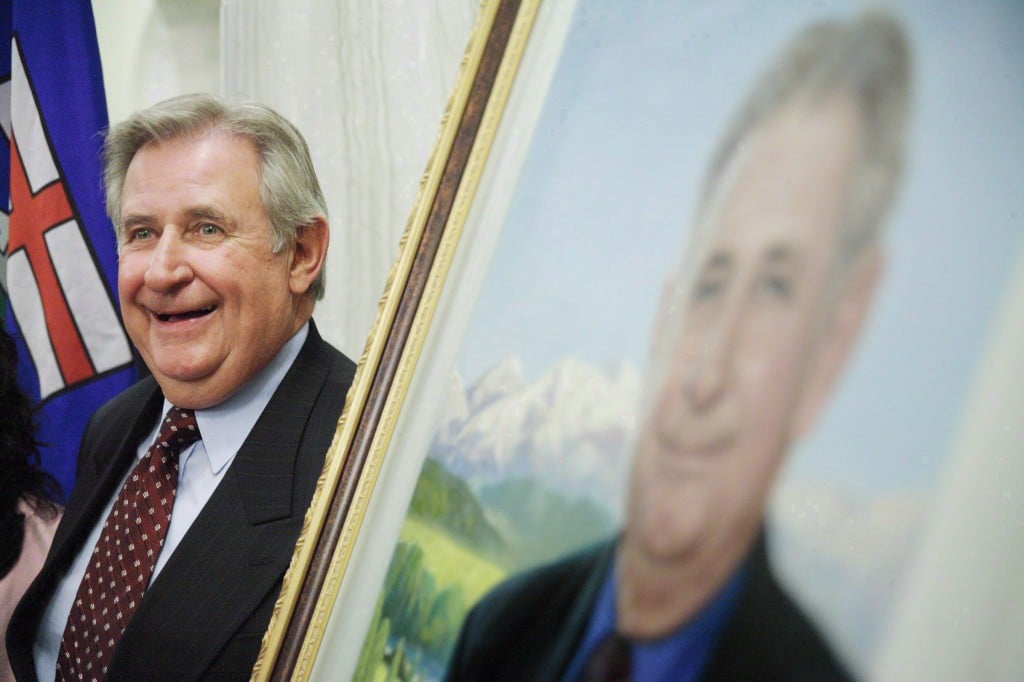 It was only after Klein’s departure that the Alberta PCs’ big tent began to fray, as harder-right Albertans abandoned more unabashedly moderate premiers Ed Stelmach and Alison Redford, both of whom rushed to undo some of Klein’s legacy of unbuilt infrastructure and some tatters in the social safety net (Redford often with open disdain for the Klein days). The Wildrose gathered strength and clout, and last year Alberta voters chose neither of the conservative options on offer, and went with something different for the first time since electing the United Farmers of Alberta 85 years earlier: the NDP, a party that had persistently caricatured all of its righty foes as Klein-era caricature slashers of public services.

The onset of the Rachel Notley big-government, tax-happy advantage-destroyers, Kenney says, is why he’s decided to ride back to Alberta after 19 years in Ottawa. (Some of his federal associates suggest the decision was at least nudged along by the widely viewed likelihood that Justin Trudeau is probably safe for another term.) His rationale is that Wildrose Leader Brian Jean, his former federal caucus mate, fancies a unified right-wing party but needs a dancing partner. The PCs, for the first time in generations, seem not to have power as their all-consuming goal; reduced after the 2015 debacle to a largely progressive cadre, they have formally rebutted a merger and would rather rebuild as a unite-the-centre movement. The apparent thinking goes that once Alberta tires of its left-wing experiment, and perhaps a future right-wing bid, Albertans will gravitate back to the political centre that PC founding saint Peter Lougheed often sought to occupy. Kenney, a former Reform MP, has had little political commonality with the PCs for the last several years.

In his brief tribute to the legacy of the party he wants to lead, Kenney skipped over the other five premiers, citing only Lougheed and, yes, Klein. He touted himself “as somebody unencumbered by the arguments of the past decade in Alberta politics”—that is, somebody who had little to do with the post-Klein Tories. He also spoke positively of the “sacrifice from every sector of our society” during Klein’s years—that is, the public sector cuts the then-premier exacted at the start of his Klein Revolution, a model later for the Chrétien Liberals federally and the Mike Harris Tories in Ontario. In a speech last week to an Alberta unite-the-right group, Kenney specifically mentioned the “sacrifices” made by nurses and doctors, though those layoffs and system reforms weren’t of their own volition. If the NDP weren’t already preparing to wage battle with Kenney on climate change and carbon tax, they’ll be salivating at the chance to warn about more health cutbacks if the would-be PC leader is planning to party like it’s nineteen ninety-Klein.

Alberta’s changed a lot since those days, the argument will go. Albertans swung progressive with Naheed Nenshi in Calgary, Don Iveson in Edmonton and an increasingly progressive premier in each of the last three provincial elections. A firmly conservative, Klein-invoking leader would be a throwback, but a continually lousy economy and bad fiscal books have Notley behind in the polls and stands to make the most appealing alternative of any stripe the likely winner in 2019.

To win what the more progressive Alberta Tories have established as a delegated leadership contest next March, Kenney will have to lure scores of Wildrosers and former Ralph Tories back. That’s clearly begun. In Wednesday’s hotel ballroom crowd of people waving miniature Alberta provincial flags was Heather Forsyth, the Klein minister who crossed into the Wildrose caucus in 2010 and served as interim leader after Danielle Smith led a stampede of MLAs back across in Jim Prentice’s disastrous manoeuvre (one which Kenney explicitly said he won’t repeat).

“I’m going to join the PC party to support what he is doing, and I think you’re going to see membership blow up, because my phone is already dead once today, asking how people can buy memberships,” Forsyth told Maclean’s a day before Kenney’s launch.

The group featured a couple of green Wildrose T-shirts as well, including one worn by Henry Lyatsky, a geologist who bolted from the Tories after his hard-right candidate lost the 2006 contest to replace Klein. He’ll pick up a Tory membership card for Kenney too. “I’ll sign up wherever I have to in order to support him,” Lyatsky said.

If he did want to run for the federal Conservative helm, there’s no way Kenney could have run as a more affable facsimile of Harper. In Alberta, Kenney has found a more convenient template to neatly fill as he ventures for the first time outside a leader’s side or his backroom.

A mischievous pollster could have a lot of fun by asking Albertans whether they would now rather vote for Rachel Notley or Ralph Klein. Kenney could become the real-world substitute for this scenario.