Paul Wells on a play about... Joe Clark? '1979' is a surprisingly funny, charming take on the last days of Clark's government 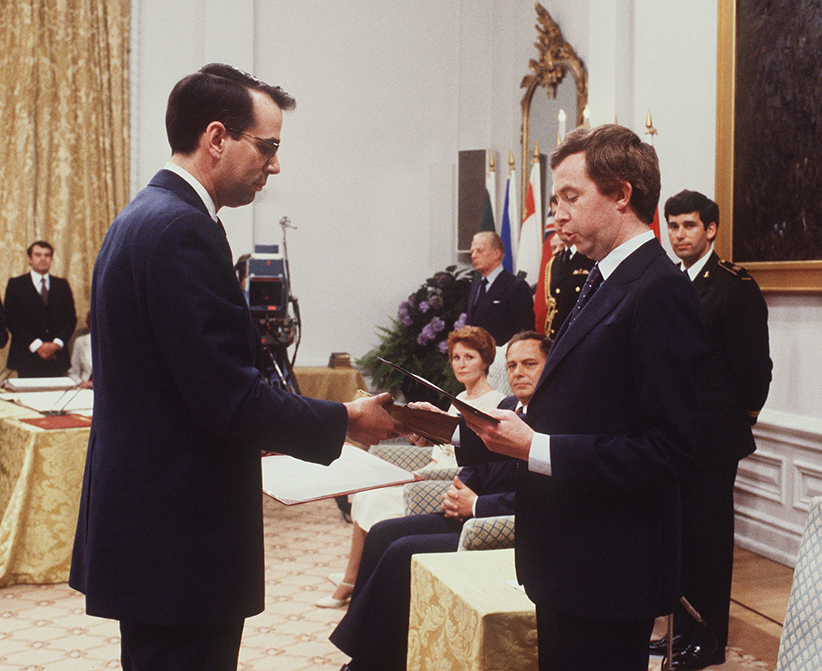 Why write a play about the last 48 hours of the Joe Clark government? “The idea of taking somebody principled and putting them under an enormous amount of pressure just seems inherently theatrical,” Michael Healey told me the other day.

That’s the genesis of Healey’s play 1979, which is running through April 30 at Ottawa’s Great Canadian Theatre Company before moving to the Shaw Festival. It features Joe Clark stewing in his office during the last days before a non-confidence vote ended his short career as prime minister. A succession of visitors—Maureen McTeer, John Crosbie, Brian Mulroney, a chainsaw-toting Pierre Trudeau, and, well, someone else—take turns encouraging or tormenting him.

A certain reflexive excess of national humility made me wonder why anyone would want to turn such materials into theatre. In Healey’s case, it’s the second time the question has occurred: His 2012 play Proud was about Stephen Harper. (His distinguished oeuvre also includes all sorts of plays about other things, I hasten to add.)

But why Ottawa politics? “I guess I find it inherently dramatic,” Healey said. “It’s oppositional. It’s about power. And dynamics in theatre are about power.”

And Clark—the country’s youngest prime minister, awkward, corduroy-clad, outgunned and outmaneuvred—sat, briefly and precariously, amid some of Canada’s most crucial debates. If he’d hung onto power, he would have faced René Lévesque in the 1980 referendum, Healey said. The Charter of Rights, the constitutional patriation of 1982, the rise of Brian Mulroney, the rejection of Mulroney by the Reform Party’s founders—they’re all bound up in Clark’s fate. “It really does feel like those 48 hours contain a bit of a hinge,” Healey said.

His play airs out all of those debates, but it wears all that baggage lightly and with style. I was going to write about 1979 anyway, as an oddity, but after my conversation with Healey I watched a performance of GCTC’s production of 1979, and I was utterly charmed. It’s genuinely funny, literate and highly entertaining. It’s cheerfully relaxed about its allegiance to historical truth—things happen in the play that didn’t happen in real life and, indeed, couldn’t have—but what’s most impressive is that it’s sympathetic and perceptive, not just toward Clark, but to politicians in general.

The shorthand view of Clark—certainly the conclusion I came to when I covered him from 1998 to 2002—is that he’s a political version of Ed Wood, the fabulously inept film director Tim Burton dramatized in his movie of the same name. The thing about Ed Wood isn’t that he was a bad filmmaker, it’s that he desperately loved cinema and still couldn’t do it. Same deal with Clark.

Healey airs out that view of Clark. Allies and enemies both wonder how he could possibly make some of the decisions he makes. But he also punctures it, especially during a long scene with Pierre Trudeau, whose towering self-regard keeps him from noticing that he keeps plagiarizing his insights from Clark. Healey also allows for the possibility that Clark was simply too fine a man to fit into Ottawa’s sordid ways. The ambassador for that viewpoint is Healey’s McTeer, never more fascinated by Clark than when he won’t do what everyone thinks he should.

But frankly, I was expecting a sympathetic view of Clark. What’s more surprising is that Healey also airs and respects the arguments for a more strongly ideological conservatism of the kind that Clark often fought, and to which he eventually lost. This play isn’t a polemic or an apology. It pays all of its characters, even the most broadly comic, the compliment of hearing them out.

Healey’s play relies at times on Jeffrey Simpson’s masterful book about the Clark government, Discipline of Power (“It’s really the handbook”) when he isn’t gleefully chucking all allegiance to any historical fact. (This is art, after all, not a documentary.) But a long scene near the end, featuring Clark and—and —well, and a surprising young visitor, is strongly informed by Chapters 2 and 8 of my own last book, The Longer I’m Prime Minister. Healey is after much more than a cut-and-paste job: He reaches conclusions from my own writing that hadn’t occurred to me, and he keeps it all light and true to his story.

This is what I liked most about 1979: That it works as theatre, not that it rings Ottawa’s political bells. As Clark, Sanjay Talwar attempts few of his subject’s tics and mannerisms, but is persuasive as a man clinging to his convictions as the waters rise. All the other parts in the play—I counted 10—are split between two other actors. Marion Day is ribald as McTeer, scheming as Mulroney, oddly touching as the surprise visitor at the end. Kelly Wong’s Trudeau is a showstopper, his John Crosbie a foulmouthed and expert confection of physical comedy.

Does Healey have another political play in him? Maybe not. “The next play will be about mortality. That’s really all I know about it.”

But any good play is really only about itself, or perhaps it’s really about everything. “Subject matter is secondary,” Healey said. “The play is something that happens in the room—between people on the stage, in the light, who mostly know what’s going to happen, and people in the seats in the dark who mostly don’t. Forging that relationship is incredibly difficult. Trying to figure out how to do it is something you could waste your life trying to achieve.”