Justice Murray Sinclair's remarks on the Truth and Reconciliation report 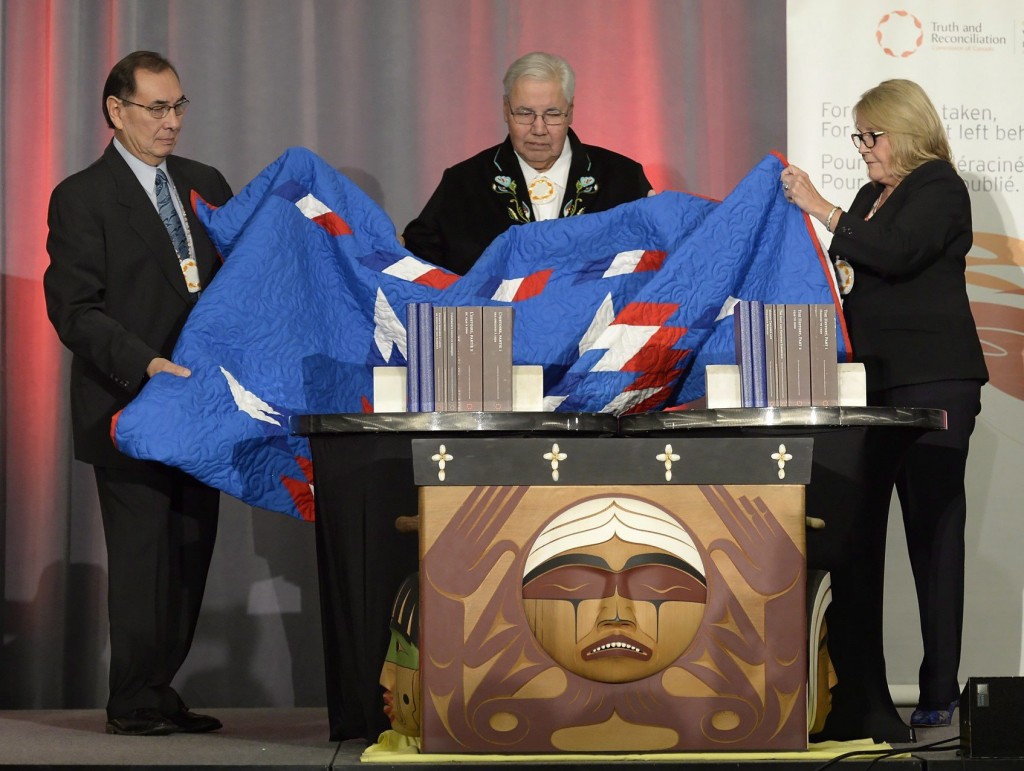 I would like to acknowledge that we are on the unceded territory of the Algonquin Nation. Thank you to Kitigan Zibi Anishnabeg and Pikwàkanagàn First Nations for welcoming us into your ancestral homeland.

I would also like to thank the many Indigenous leaders here for their presence, as well as Prime Minister Trudeau and members of Cabinet for being here.

You may have noticed two empty chairs on the stage. They symbolize those who could not be present — the boys and the girls who never came home from the residential schools and whose memory we will continue to honour.

Thank as well to representatives from the parties, groups and associations who have been part of the Truth and Reconciliation Commission’s work over these past years.

It’s a good sign, I believe, to have such a range of people and groups represented in this room. It’s a sign of the broad support for the work of the commission and of the work still ahead of us.

Like the release of the summary report and the commission’s calls to action in May, today marks both a beginning and an end.

For many, today marks the end of a long road, laid out for us some years ago.

…and especially the individuals whose personal dedication have helped bring us to this point in our country’s journey of reconciliation.

Much thanks as well to my fellow commissioners, to all the staff of the TRC, and to Kim Murray and Tom McMahon, who both served as executive director during the commission’s mandate.

These people worked with great determination for six years to bring to light the stories of our collective past, and for that I, and all people in Canada, thank them.

Over the time of our mandate, the commission heard statements from Survivors, gathered documents and worked to create a number of calls to action aimed at addressing the damage done.

… and how the legacy Indian Residential Schools is part of that history and of our country today.

It is my hope that the TRC’s calls to action will help bring about a new era for Canada — for Indigenous and non-Indigenous alike.

My hope is strengthened by what I have seen from the people of Canada since the commission released those recommendations earlier this year.

Without waiting for governments to act, from coast to coast to coast, individuals, groups and organizations have made changes and started campaigns. I will share just a few examples with you:

KAIROS, an organization uniting Canadian churches, has launched a major campaign focussed on the the role of education in reconciliation, calling for t​he Residential School legacy, Treaties and Indigenous contributions to Canada to be a mandatory part of the curriculum in each province and territory.

The Canadian Association of Statutory Human Rights has unanimously approved a draft motion that specifically commits to actively advancing and promoting the TRC’s Calls to Action related to the work of human rights commissions.

We have seen universities and provinces across the country are incorporating courses on Indigenous history, rights, treaties and other subjects as mandatory elements of their curriculae.

In a smaller, but no less important or significant way, the commission received a letter from the artistic director of a major theatre company, expressing his wish to create a Indigenous-related production in the coming year.

Pope Francis’ recent willingness to acknowledge the past offences of his Church in South America also gives us hope that the Catholic Church will act toward reconciliation in our own country.

…and action in addressing the challenges faced by many Indigenous communities in education, wellbeing and employment…

…and of course, we are encouraged by the promise of an inquiry into murdered and missing Indigenous women and girls in Canada and the renewal of a nation-to-nation relationship between Canada and Indigenous peoples as stated in last week’s speech from the throne.

With actions and commitments such as these, I stand before you hopeful that we are at the threshold of a new era — a point of fundamental change in Canada’s story…

…a period of change that, if sustained by the will of the people, will forever realign the shared history of Indigenous and non-Indigenous people in Canada.

Change of course, will not be immediate. It will take generations, so it is important that Canadians call on the federal government create tools of reconciliation that will live beyond today.

With this in mind, we encourage the federal government to create a foundation for future leaders to build upon with a Proclamation on Reconciliation, as well as a Council for Reconciliation — a body to oversee and coordinate efforts going forward.

Finally, we ask that people in Canada support the creation of a Covenant of Reconciliation to be signed by all parties, as well as any willing individual from coast to coast to coast.

Achieving reconciliation is like climbing a mountain — we must proceed a step at a time. It will not always be easy. There will be storms, there will be obstacles, but we cannot allow ourselves to be daunted by the task because our goal is Just and and it also necessary.

Remember, reconciliation is yours to achieve. We owe it to each other to build a Canada based on our shared future, a future of healing and trust.

I wish you the very best in your efforts.

Thank you again to everyone, past and present, who helped us walk this far and who have helped light the way forward.

Notes on the volumes of the report for Justice Sinclair

Volume 3
Volume Three, “The Métis Experience”, chronicles the experience of the Métis people. Changes in government policy meant that at times their children were banned from residential schools, while at other times they were the only schools that would accept Métis children.

Volume 4
Volume Four, “The Missing Children and Unmarked Burials Report”, is concerned with ascertaining how many children died at the schools, the conditions that led to their deaths and where the children were buried. It also makes clear that when advised of the circumstances that were contributing to an elevated death rate, governments ignored the opportunity to act.

Volume 5
Volume Five is “The Legacy”. It examines the devastating effects the residential school system has had on former students, their families and Canadian society as a whole, from the loss of languages and culture, to the gaps Indigenous people experience in health, education and employment, to the overrepresentation of Indigenous people in child welfare and correctional systems.

Volume 6
The final volume, “Reconciliation” lays down guiding principles as a foundation for advancing reconciliation in Canadian society. It points to the critical role Indigenous peoples’ cultures, histories and laws must play in the reconciliation process, as well as the need for concrete measures to repair the damage done and to establish respectful relationships between Aboriginal and non-Aboriginal peoples.