'These weapons were designed for one purpose and one purpose only: to kill the largest number of people in the shortest amount of time. There is no use and no place for such weapons in Canada.' 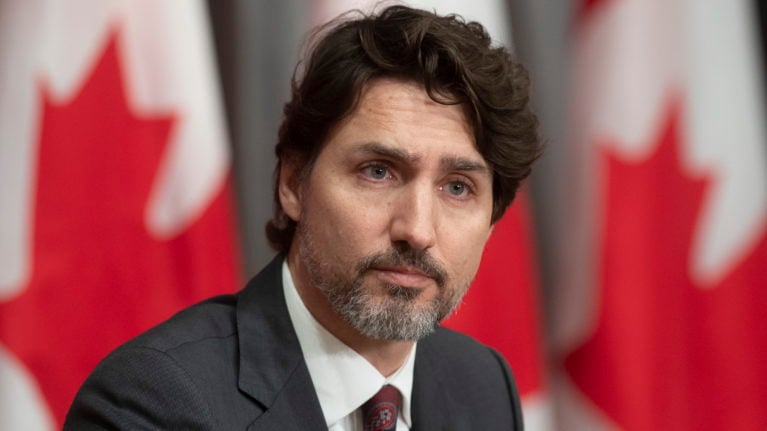 Prime Minister Justin Trudeau during a news conference in Ottawa, announcing a ban on assault weapons, May 1, 2020. (Adrian Wyld/CP)

On May 1, the prime minister announced that Canada will be banning the buying, selling, transport, import or use military-grade assault weapons. The announcement comes in the wake of the deadliest mass shooting in the country’s history. This is the transcript of his remarks:

Good morning, everyone. Before we get started, I want to take note of the appointment of Tiff Macklem as the next Governor of the Bank of Canada. Mr. Macklem, who is currently the dean of the Rotman School of Management at the University of Toronto, has extensive experience in the global financial system and risk management. With his appointment, the Bank of Canada will be well positioned to help with the economic response and eventual recovery from the COVID-19 pandemic. I also want to note that May 1st marks the beginning of Asian and Jewish Heritage Month. Unfortunately, we’ve seen a rise anti-Asian sentiment lately and this week two more anti-Semitic incidents took place. It’s important to celebrate who we are at all times and not give in to hatred or fear. When times are tough, Canadians come together. That is who we are.

[translated from French] On December 6th, 1989, I was in Montreal in CEGEP at the bottom of the hill to Polytechnique. I couldn’t tell you that I was studying that day. I will never forget from the moment when I heard the first reports of a shooting at Polytechnique. At first, I was shocked. I was 17 years old, and I couldn’t understand that such an act of violence towards women could happen in a country such as ours, in a society such as ours. [end of translation]

Every Canadian has their version of this story. Every one of us remembers the day when we realized that even in Canada, a man with a gun could irrevocably alter our lives for the worse. We remember how our sense of safety was shaken.

Our world view was changed. L’Ecole Polytechnique, Mayerthorpe, Dawson College, Moncton, La Loche, la grande mosquee de Quebec, the Danforth, Fredericton and Cumberland Colchester and Hants Counties, Nova Scotia. These tragedies reverberate still. They shape our identity. They stain our conscience. They make adults out of children. And the heartbreaking truth is they’re happening more often than they once did. With each passing year, more families are ripped apart by tragedy. More parents are struggling to explain the inexplicable to their kids. And more teenagers are growing up in a world where gun violence is normalized.
It needs to stop.

[translated from French] During the last election, we committed to banning assault-style weapons. And we’ve put in place a program to buy back these weapons. We announced our intention to work with the provincial and territorial governments in order to allow municipalities to ban handguns. We also promised to take other measures in order to save lives. In October, Canadians confided in their elected officials a clear mandate to restrict the use of these weapons in Canada. And we intend to maintain our engagement. [end of translation]

Today, we are closing the market for military-grade assault weapons, in Canada. We are banning 1,500 models and variants of these firearms by way of regulations. These weapons were designed for one purpose and one purpose only: to kill the largest number of people in the shortest amount of time. There is no use and no place for such weapons in Canada. For many families, including many Indigenous people, firearms are part of traditions passed down through generations, and the vast majority of gun owners use them safely, responsibly and in accordance with the law. Whether it be for work, sport shooting, for collecting or for hunting. But you don’t need an AR-15 to bring down a deer. So, effective immediately, it is no longer permitted to buy, sell, transport, import or use military-grade assault weapons in this country. To protect law-abiding gun owners from criminal liability until they can take steps to comply with this new law, there will be a two-year amnesty period and we will legislate fair compensation. Now, I want to take a moment to recognize the leadership of Minister Blair on this file. Tackling gun violence has been a personal and professional priority of his for decades. He’s done incredible work to make this policy a reality, and we’re here today thanks to his leadership and to the leadership of people like him. Thank you.

An entire generation of Canadians will remember exactly where they were on Sunday, April 18th, 2020. They will remember how their sense of safety was shaken, how their outlook on the world was forever changed. They will remember the day that they lost some of their innocence. This chapter in our history cannot be rewritten, but what happens next is up to us. We can stick to thoughts and prayers alone, or we can unite as a country and put an end to this. We can decide together that enough is enough. Today’s announcement builds on the things we did during our first term. It’s the next step. And there is more work ahead to implement this and pass legislation to further strengthen our laws.

I’ve already spoken with the other parliamentary leaders and I know that we will be able to work together and do even more to keep Canadians safe.

Every single Canadian wants to see less gun violence and safer communities. So today we take another big step forward. Thank you very much.