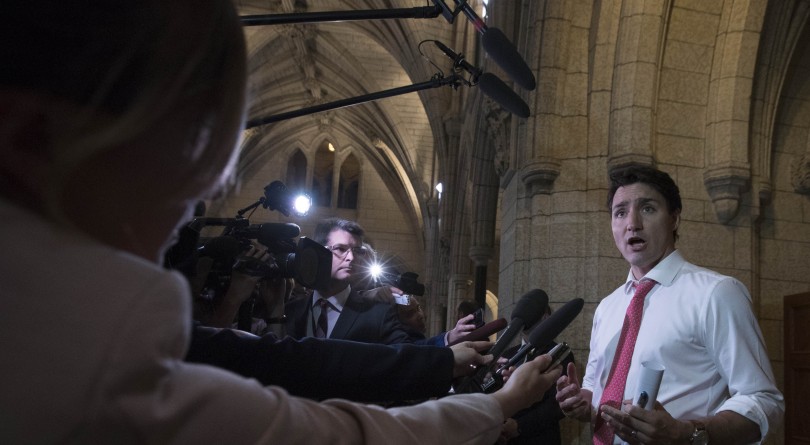 Justin Trudeau’s reported “Kokanee Grope,” an allegation dating back 18 years, has unleashed the sort of polarized debate now routine as we grapple with the complexities and nuances raised by #MeToo. Some see it as a non-story; others a witch hunt overblown for partisan reasons; some say that it smacks of hypocrisy on Trudeau’s part. But it’s possible to believe that a political career should not be in tatters because of a single, two-decades-old allegation and also that the “Kokanee Grope” story is important. It matters not only because touching someone without consent is bad, disrespectful and potentially criminal behaviour. It warrants attention because Trudeau’s woefully inadequate 2018 response detonates his credibility as an authority on sexual assault sensitivity and awareness, and raises questions about his perceived privilege.

The facts are these: in August 2000, Trudeau was the subject of an editorial in the Creston Valley Advance, a local B.C. paper. The former prime minister’s son—then a 28-year-old high school teacher two months from delivering a stirring eulogy at his father’s funeral—was upbraided for reportedly touching one of the paper’s female reporters (“groped”  and “inappropriate handling,” according to the paper) at the Kokanee Summit, a music festival. Trudeau apologized “a day late” to the unnamed journalist, the editorial stated, who was also reporting for the National Post and Vancouver Sun. Trudeau is quoted: “I’m sorry. If I had known you were reporting for a national paper I would never have been so forward.”

Trudeau’s response, words he’s never disputed, reflect the power dynamics that routinely underline encounters later written off as “forward.” Maybe Trudeau was trying to be funny. But his words also suggest that touching a woman in a manner that bothered her would have been okay if she’d only been a reporter for some Podunk paper. The editorial picked up on this: “It’s not a rare incident to have a young reporter, especially a female working for a small community newspaper, be considered an underling to their ‘more predominant’ associates and blatantly disrespected because of it.” Trudeau’s quasi-apology also bristles with awareness of his image on the national stage. An unseemly mention in the Creston Valley Advance is one thing, in the National Post another.

The story lay fallow for close to two decades as Trudeau ascended to the country’s top office. No surprise there. Anyone who stumbled on it pre-#MeToo would see an isolated case reported in a low-profile outlet: then and now, such allegations are only taken seriously if more than one woman (ideally at least a half dozen) come forward. There’s also human psychology at play: Trudeau’s image in the mass media over the years has been “dreamboat,” not “creep.” After #MeToo exploded, however, it was open season on past behaviour. And no one was leading that rallying cry more than Canada’s self-declared feminist PM who’d declared a zero-tolerance policy for sexual harassment, assault and misbehaviour.

“There is no context in which someone doesn’t have responsibility for things they’ve done in the past,” Trudeau told CBC News last January. In that interview, the PM expressed confidence no one could accuse him of the kinds of behaviours that brought down several high-profile politicians. “I’ve been very, very careful all my life to be thoughtful, to be respectful of people’s space and people’s headspace as well,” he said, a comment that suggests he’d either forgotten that long-ago apology or believed it would never come back to bite him. Trudeau highlighted his activism against sexual assault; he was one of the first male facilitators at the sexual assault centre at McGill students’ society, he boasted. There, he said, he led “conversations—sometimes very difficult ones—on the issues of consent, communications, accountability, power dynamics.”

The 2000 editorial rose from the archives last April when the satiric gossip magazine Frank ran a compare-and-contrast between it and Trudeau’s statements about sexual assault, calling out hypocrisy. No one paid any heed until a series of stories referencing the “grope” appeared in Buzzfeed, the Toronto Sun, Breitbart News and the New York Times.
The Times’ report addressed the much-circulated belief that the 18-year-old editorial was recycled on right-wing outlets as part of a  bid to embarrass the PM before the G7 summit: “Coincidence? Maybe, maybe not,” it concluded.

Trudeau, normally front and centre of such discussions, went mute. The PMO issued a statement echoing his past remarks: “As the PM has said before, he has always been very careful to treat everyone with respect. His first experiences with activism were on the issue of sexual assault at McGill, and he knows the importance of being thoughtful and respectful.” It ends: “He remembers being in Creston for the Avalanche Foundation, but doesn’t think he had any negative interactions there.”

Coming from a prime minister with a reported history of dealing with “issues of consent, communications, accountability, power dynamics,” the statement was tone-deaf and oblivious. It doesn’t even rise to the standard of an “I’m sorry if you were offended by my behaviour” non-apology. It’s an “It never happened, I don’t think” answer with enough wiggle room should the woman ever decide to come forward and take on a prime minister (notably, the PMO statement focused on Trudeau being in Kokanee to attend a charity fundraiser, downplaying the fact it was also a beer-company-sponsored music festival).

The troubling power dynamic underlining Trudeau’s 2000 statement—”If I had known you were reporting for a national paper I would never have been so forward”—that conceded unwanted behaviour had occurred is again on display. If the woman was so affected by an alleged interaction with Trudeau that it become the subject of an angry newspaper editorial, it’s safe to say it was “negative” from her point of view. And her point of view is what matters here, not what Trudeau “doesn’t think.” It’s not about him. Anyone sensitive to the nuances of reporting about any form of personal assault should know that.

The matter is complicated by the fact that, just as #MeToo has emboldened people to come forward, the unnamed journalist isn’t talking, as is her prerogative (Maclean’s attempts to contact her went unanswered). That has created an odd news stasis and vacuum. A Canadaland podcast recently called out Canadian media for failing to report the story more fully. Host Jesse Brown suggested a double standard was at work “protecting Trudeau.” That’s news to Lorne Eckersley, the publisher of the Creston Valley Advance, who has been deluged with media inquiries for weeks. “Every CBC outlet in every city has called,” he told me. “It does get a bit tiresome.”  The paper has tried to dig into the story, Eckersley says, and so far has come up empty.

As a National Post investigation published days ago (after the Canadaland podcast) indicates, there can be no “He said, she said” traction seen in #MeToo stories when neither principal is talking. The Post story confirmed that the journalist reported her encounter with Trudeau to the Creston Valley Advance‘s then editor and publisher who both believed and supported her. She “was distressed,” the editor recalled. The reporter wanted the alleged encounter to be made public, the Post reports, saying they understand she wrote the editorial.

The story is now bigger than an an 18-year-old editorial and an allegation many have dismissed as minor compared to the savage sexual assaults of which Harvey Weinstein et al. have been accused. But its ordinariness is one reason it warrants attention. Even in 2018, young women have to contend with physical encroachments, particularly in the workplace. We see it in the vile harassment of on-camera reporters and the sort of daily harassment recently alleged against Prince Edward County winemaker Norman Hardie (Hardie admitted to some charges and denied others in an apology). Unwanted touching is often extended under the guise of friendliness, the colleague with the “You looked stressed, I’ll give you a massage” line. Or there’s the guy who sees women’s bodies as real estate to be annexed, particularly when these women are perceived too low in the pecking order to say anything or to be believed. But such seemingly minor intrusions accumulate over time and become corrosive, eroding a sense of autonomy. That’s why they need to be called out.

The story now is the straight line that can be drawn between Trudeau’s quasi-apology in 2000 and his vaguer statement in 2018, just as #MeToo is reframing cultural understanding of consent and accountability for historical behaviour. That movement has seen many men, including Anthony Bourdain, reassess past behaviour and apologize for it. Trudeau’s certainty that he has always been “respectful of people’s space and people’s headspace” appears to leave no space for similar self-reflection. That’s a problem.

A bigger one, of course, is that any admission on the Prime Minister’s part would subject him to the high standards of behaviour he demands from others. The fact he refuses to make himself accountable to those very standards is why the “Kokanee Grope” matters.