Lethbridge says 'oki' to everyone who visits 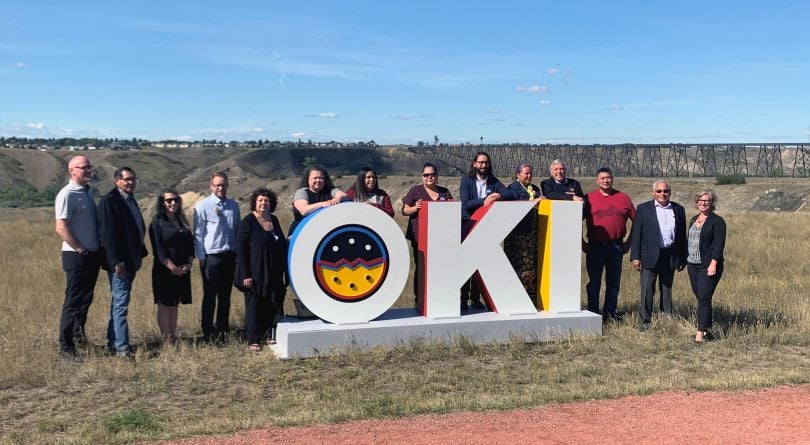 Mayor Spearman with members of the Reconciliation Lethbridge Advisory Committee on the newly unveiled Oki project. Amanda Scout is pictured in this photo, standing behind the K of Oki. (The City of Lethbridge)

On the day Jordan Head was taken from his family, his language was taken, too. The residential school he attended was located on southern Alberta’s sprawling Kainai reserve, where he grew up; but instructors banned Head, then six, from using Blackfoot words to say hello or that he was hungry or that he was sad. He’d speak it with his dorm mates when school staff weren’t around. If he got caught, he got punished.

Now, decades after Head graduated and began to reconnect with his mother tongue, the city where he lives has woven a small piece of that language into its civic fabric. In mid-September, Lethbridge council declared the Blackfoot word oki the ofﬁcial greeting of Alberta’s third-largest city.

To mark its adoption, and Lethbridge’s third annual Reconciliation Week, a downtown group produced an OKI sign in ﬁve-foot-tall letters—like the made-for-selﬁes “Toronto” sign or countless facsimiles around the world. It’s the word Head and the community’s thousands of Blackfoot people use to greet each other; it literally means hello. It gives Head hope, and pride that he was part of decision to establish the welcome as Lethbridge’s. “We’re being acknowledged as being Blackfoot-speaking people, and we can create partnerships, and we can respect each other, and we can work together,” he says.

Oki is pronounced like the ﬁrst half of “okey-dokey”—kind of. “It’s more of a g-sound than a k-sound,” explains Amanda Scout. She co-chairs Lethbridge’s reconciliation advisory committee, established after the Truth and Reconciliation Commission report. Panellists, including Scout and Head, bandied about a meaningful action to mark 2019 as the United Nations’ International Year of Indigenous Language. At ﬁrst, they pondered declaring Blackfoot an ofﬁcial language of Lethbridge, but they worried the service provision requirements and translation would be onerous for administrators of the 101,000-person city.

They searched, instead, for a change that would spark conversation and curiosity “about the people who lived here before the city existed,” says Scout, a Kainai woman whose parents, like Head, were denied their birth language at residential school. Around the committee room, members quickly agreed an initiative built around oki would work.

But city council resolved to do more than a ceremonial gesture—something greater than a word added to the list of municipal arcana such as Lethbridge’s ofﬁcial flower (gladiolus), gemstone (ammolite) or tartan (green and gold, mostly). Councillors and city staff will afﬁx oki stickers to their ofﬁce doors. Bureaucrats will establish a plan and budget to incorporate oki and other Blackfoot terms into civic signage and the names of parks or future neighbourhoods—perhaps including the city’s welcome signs. Mayor Chris Spearman now wears the greeting on a lapel button.

He’s the other co-chair of Lethbridge’s reconciliation committee and says a friend introduced oki to him several years ago. He recently came across an Indigenous family while shopping at Canadian Tire and eagerly delivered the one-word Blackfoot greeting. “And they said: ‘And then what do you say?’ And I said I’m not sure,” Spearman recalls. The family shared with him the Blackfoot phrase for “how are you”—tsanitaapi. The mayor stumbles on the ﬁrst syllable as he relays it, acknowledging: “And now my Blackfoot vocabulary is continuing to build.”

RELATED: Why Indigenous languages should be taught alongside French and English

It’s a long-overdue nod to the territory’s original people, a gesture meant to raise awareness like the more widely employed traditional land acknowledgement. But Spearman and Scout regard it as a mere step on a longer, challenging road. Indigenous people are overrepresented in Lethbridge’s poverty and unemployment statistics and make up a jarring 70 per cent of users of the city’s safe drug consumption site (the busiest one in North America), the mayor says. Residents face rental-housing and employment discrimination, says Head, director of the Treaty 7 Urban Indian Housing Authority. In the realm of rhetoric and meaning, Scout points out there are still ugly remnants of the past: Indian Battle Park and a major corridor named Whoop-Up Drive, the latter a bygone reference to the whisky trade.

But to her, the oki decision—a unanimous vote from a council without any Indigenous members—is a meaningful show of respect. “It makes you feel more comfortable in the space and more like you belong,” Scout says. The University of Lethbridge, the city’s second-largest employer, has also made oki part of ceremonial greetings.

Head has needed some time to get used to hearing non-Indigenous people say oki to him. At ﬁrst, it felt like they were making fun of him and his language. Now he sees it as the acceptance and acknowledgement that decision-makers intend. And downtown, there will be a ﬁve-foot written reminder of that wish to make him, and others, feel welcome.