Meet the single mom who took on the RCMP

Ex-RCMP constable Heli Kijanen resigned due to harassment. In an interview with FLARE, she describes the initiative behind the class-action lawsuits 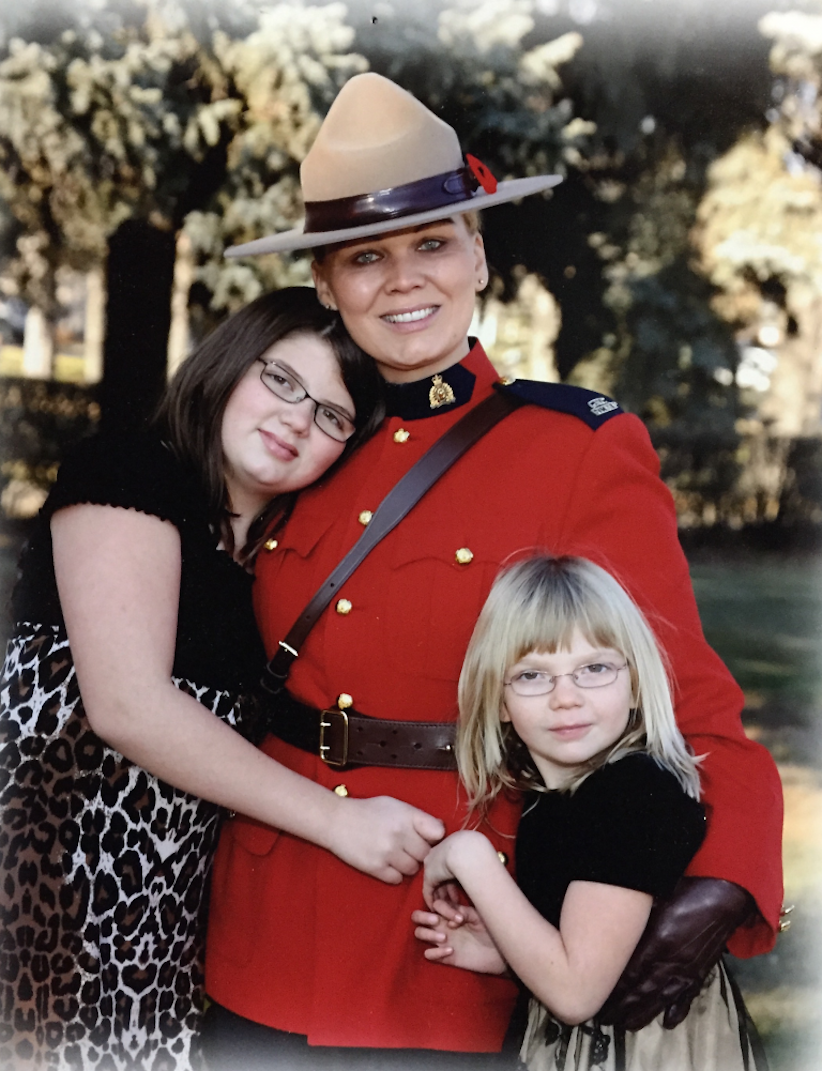 Heli Kijanen and her daughters, Faith and Grace.

This story first appeared in Flare.

“You came to the RCMP wanting to personally contribute to your community, and we failed you.”

With tears in his eyes, Royal Canadian Mounted Police Commissioner Bob Paulson uttered those words at a news conference in Ottawa last Thursday. Along with the formal apology, there was the announcement that the federal government had set aside $100 million to settle hundreds of claims over harassment, bullying, discrimination and sexual abuse within the force dating back to 1974 when women first joined, with no cap on the payouts. (The settlement agreement is still pending approval by a federal court.) Former RCMP members Janet Merlo and Linda Gillis Davidson—the two lead plaintiffs who had brought forward the class-action lawsuits against the RCMP—were present at the conference.

There was another woman watching the apology on the screen of her cellphone, from the parking lot of a Thunder Bay DriveTest Centre nearly 1,500 km away. She was waiting for her 16-year-old daughter to pass her road test. She had heard about the statement earlier, but hadn’t seen the formal apology yet. “Baby, we won,” she’d told her daughter. (Her daughter had just passed her driver’s test, too).

That woman was former RCMP constable Heli Kijanen—and she’s the single mother who spearheaded the initiative in 2011 that what would soon become the class-action lawsuits related to harassment and gender-based discrimination within the force, initiated with counsel Alexander (Sandy) Zaitzeff, a Thunder Bay lawyer.

“The minute I heard the statement, I thought, ‘Thank you, lord, I can truly start my healing,’” Kijanen told FLARE (Maclean’s sister publication). “The RCMP said sorry, so that means they acknowledge that there was a problem, and that the many women who were harassed over all these years didn’t deserve to be treated that way. Up until that moment, my life has felt, for the most part, unpredictable and out of control. That’s what enduring abuse will do to you. But now I feel that I can start to close this chapter of my life.”

Kijanen graduated from an RCMP training program in Regina in 2008 and was soon stationed in a small detachment in Saskatchewan. She excelled at her job, she says, so much so that she bought a sterling silver ring with a Superman emblem. But things changed during her second year at the detachment. While Kijanen can’t share the exact details of the harassment she says she experienced due to an ongoing investigation, she can say that her work environment became “extremely toxic.”

“It was an old boys’ club, and they didn’t want a single mom there—at least, that’s how I was made to feel.”

“They tore me to shreds until I was pretty much forced to resign,” she says. Kijanen felt scared to go into her workplace. “I had to call my mom every day as I was walking into work just to hear her calming voice.”

Kijanen remembers one day feeling so scared and alone that she went into the locker room onsite and held a loaded service revolver to her head. “At that moment, holding a gun to my head, I felt like I didn’t even deserve to exist anymore,” says Kijanen. “All I could picture right then was my two girls, Faith and Grace, and that pulled me out of it,” she says, in tears.

During this time, Kijanen says she developed bulimia. “The harassment made me feel like a useless human being who didn’t deserve to take up any space,” she says. “I think I developed the eating disorder because it offered me a sense of control when everything else felt beyond my control.”

Kijanen resigned after the harassment became too much to bear. 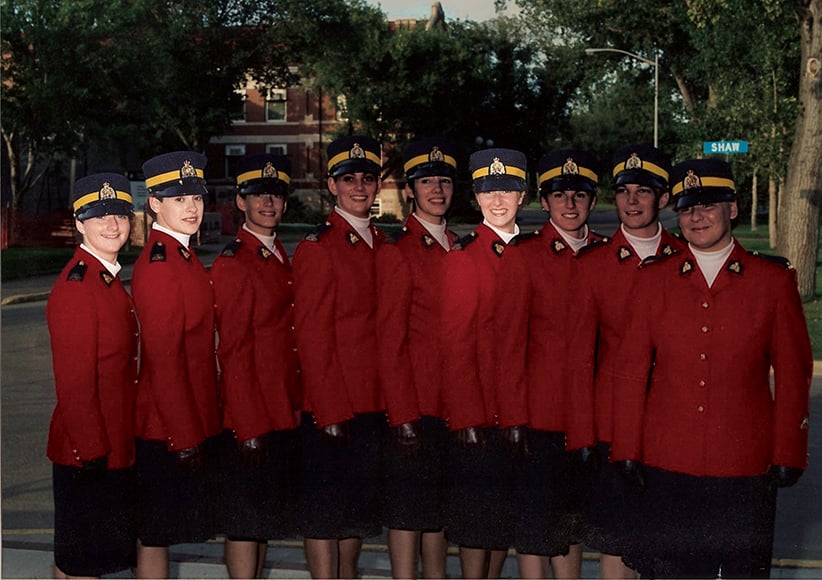 “I went into the RCMP to protect and serve my community, but I was made to feel helpless and vulnerable. They trusted me with a pistol, yet I still felt like I couldn’t defend myself against the bullying and harassment,” says Kijanen. “Who’s supposed to protect the person whose job it is to protect others?”

After she resigned, Kijanen returned to Thunder Bay to be closer to her family and says she stayed in bed for at least a week and a half. Then she turned her upset into action. “I reached out to Alexander Zaitzeff and he listened to my story with disbelief. He said if I could find some other women like me, we might have a case.”

So Kijanen did her research. “I just started googling, and I found one woman who invited me to a private Facebook group with some other female Mounties. It was a good place to go and share my story. As I realized that other women had similar experiences, I just put it out there, ‘Does anyone want to join me for a lawsuit, because I’m starting one.’”

From there, Kijanen says she pulled Zaitzeff out of retirement, and another Thunder Bay lawyer, Christopher Watkins, also signed on to help. Zaitzeff and Watkins began to build the case with six other lawyers in Ontario and B.C., including David Klein and Won Kim, and soon heard similar stories from Mounties all across Canada. Together they decided the lawsuit would be filed on behalf of two former RCMP officers, and that they would then seek a class-action certification of the suit so that more people could join as plaintiffs.

Having set the case into motion, Kijanen needed a break. “I wanted to escape Thunder Bay for a bit and visited L.A. not knowing a soul,” she says. She rented a car and remembers feeling something pushing her to go to The Price Is Right Live Stage Show.

“Somehow I printed out the tickets and found the studio,” says Kijanen, who showed up wearing an ‘I Heart T. Bay’ T-shirt. “Out of 300 people, I was the first person called up. I got on the stage after guessing the exact right price of two video cameras. I remember going up and hugging host Drew Carey and thinking, ‘This can’t be real.’ I was up on stage with another contestant called Daniel Lack, and near the end of the whole thing, I won. I actually won! It was just the boost I needed,” she says.

After she returned from her whirlwind trip, Kijanen decided to become a paralegal. “I had all this legal knowledge and wanted to put it good use,” she says. “When I was an RCMP officer, I was known for being compassionate and professional without resorting to brutal force. I wanted to use those skills in some way, and by becoming a paralegal I realized I could fight for and defend the underdog.”

Kijanen also fought her eating disorder and started a weight training program that eventually led to her participation in a bikini competition.

“Getting physically stronger helped me heal a lot of the trauma,” she says. “I figured if I couldn’t feel strong inside, at least I could damn well look it on the outside.”

All the while, the class-action lawsuit gained momentum. In 2015, the number of misconduct investigations launched by the RCMP into its own staff increased by 158 per cent over 2014. And at one point, Kijanen says that Erin Brockovich, the American legal clerk and environmental activist who took on California’s Pacific Gas and Electric Company in the early ’90s, even reached out to see how she could show her support.

Last summer Kijanen graduated her paralegal program and has since started working in Christopher Watkins’ office. She also runs her own business, Heli Kijanen Paralegal Services, in Thunder Bay.

When she head about last week’s settlement, Kijanen says she felt relief. Although the specific terms of the agreement won’t be disclosed until they’ve been federally approved, we now know that more than 20,000 current and former female employees may be eligible for compensation through an independent and confidential claims process involving six different levels of coverage, based on “the severity of the acts and the impact on the woman’s welfare and career.” RCMP Commissioner Bob Paulson also said that as part of a course of organizational change there were will new initiatives to “eradicate gender discrimination and sexual abuse.”

“Hearing the news made me feel overjoyed,” says Kijanen. “It’s amazing how a few little people can make a big change.”

If Kijanen had the chance to talk to Paulson face-to-face, she would tell him, “I hope you realize that your people were wrecking lives and families. I hope this is this beginning of a new era, and that the RCMP will hold themselves accountable to their promise.” Kijanen will remain an advocate for fixing what she says she sees as the “flawed culture” of the RCMP and has since proposed returning to the force.

Kijanen still wears her Superman ring, and says she feels every bit of a hero today—especially to her daughters. Her advice for women facing harassment in the workplace? “Do not remain silent. Don’t try to fight it on your own. Be strong, open up, ask for help and don’t stop until you find someone who will listen. And feel free to come and talk to me. I’m always here to help.”