An attempt to erase reference to the deadly practice from the police force's Wikipedia page stirs up dark memories, and new questions 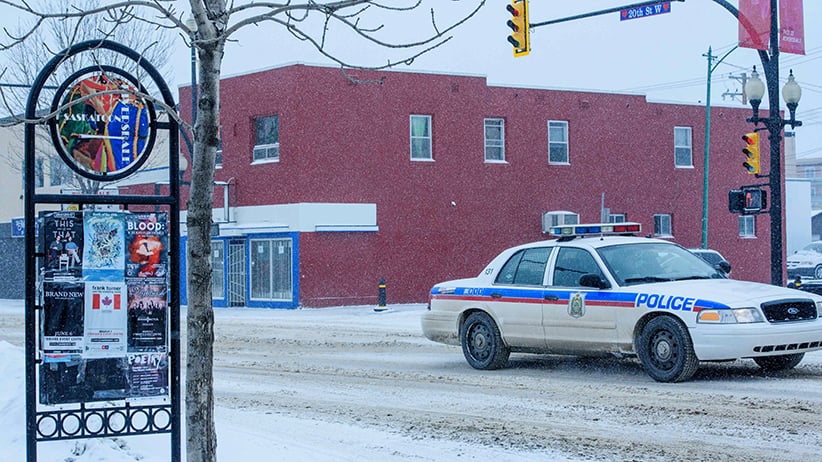 On Jan. 28, 2000, two police officers drove Darrell Night five kilometres outside of Saskatoon and abandoned him in -22° C weather with just a T-shirt and jean jacket on his back. The incident was part of a series of “starlight tours,” a practice in which officers were said to have picked up drunk or rowdy people like Night, at night, and dropped them off in the dead of winter.

At least three Indigenous people in Saskatoon are suspected to have died this way, beginning with 17-year-old Neil Stonechild in 1990.

Although Night survived, he moved to British Columbia and has never returned. “In Saskatoon I found it very hard to recover from and move on from what they did to me that January night,” he says, typing his message to his sister because he still has trouble hearing and communicating due to trauma from the incident. (He is now 49). “I have never received an apology from the police for what was done to me.”

Yet, in 2016, there appears to have been an effort to erase this ugly, very prominent chapter from the police force’s history. Last Wednesday, an 18-year-old student named Addison Herman discovered that information about the tours was deleted from the Saskatoon Police Commission’s Wikipedia page, and the IP address of the computer that executed the change was registered with the Commission itself. “It was a pretty bold move on their part,” says Herman. The police admit that someone using a police computer did something to the Wikipedia entry but haven’t specified anything further.

Priscilla Settee, a professor of Indigenous studies at the University of Saskatoon who works with exiting Aboriginal gang members, says the problems they face are endless. “What aren’t the problems?” she says, referring to poverty on reserves, lasting trauma from residential schools, and, in the justice system, stark jail conditions with recently privatized food services, leading inmates to start hunger strikes. “People are literally stockpiled into a jail cell together,” she says.

Saskatoon declared a year of reconciliation last June, as did Winnipeg this January. “We’ve tried very hard to take the TRC [Truth and Reconciliation Commission report] to heart,” says Richard Brown, spokesperson for Saskatoon Mayor Don Atchison. The commitments include “Aboriginal cultural awareness” training for all government employees, including police officers. The mayor was “very disappointed” to hear about the Wikipedia deletion. “As soon as something like this happens,” says Brown, “you have to hit the reset button and say, ‘What more do we need to do?’ ”

Robert Henry, a lecturer of Indigenous studies at the University of Saskatchewan, says the city needs to ensure the training isn’t merely cultural education, but rather what he calls “anti-oppressive training” that challenges people’s own prejudices. “They’ll say it’s ‘anti-racist week,’ but really it’s having a multicultural day,” says Henry. “If you see two Aboriginal [people] fighting, they’re ‘criminals being criminals.’ On the other side, if you see two [white] boys playing, they’re ‘boys being boys.’ ”

When the two starlight-tour guides were sentenced to eight months in prison for Night’s unlawful confinement, the maximum sentence was 10 years, and no officers were criminally charged for the deaths of the other victims. By comparison, an Indigenous man in Saskatoon was sentenced to four months in January 2016 for falsely reporting a starlight tour.

The RCMP have admitted that racism exists in the justice system. Last year, Commissioner Bob Paulson told the Assembly of First Nations, “I understand there are racists in my police force. I don’t want them to be in my police force.” Yet, in response, the Saskatoon police denied the practice of “carding” (performing street checks on a targeted demographic, often Aboriginal people) or racism influencing police behaviour.

“To deny it is just outrageous,” says Settee, who is Cree. “If I go into a store, I’m followed around.”

However, the police say they are making an effort. The department began a “peacekeeper cadets” program in 2014, which engages officers with 28 Indigenous elementary school students to encourage structure, discipline and encouragement to play sports and stay in school. The police chief meets with First Nations elders periodically and has awarded them a police badge, while they have presented him with the honour of an eagle staff. “We’ve done a lot to repair our reputation and will continue to do so,” says Kelsey Fraser, spokesperson for the Saskatoon Police Commission.

Ever since Night’s starlight tour, his entire family has been living on a reserve outside the city. Although his mother, Rosa Desjarlais, says Saskatoon is her home, she won’t return. “I didn’t think anybody could be that cold-blooded,” she says. “I don’t trust the cops, period. I would never go to them if I was desperately in need because they would never, never take my word for it.” Night says he’ll keep away from the province. “I like the mountains. I find it more peaceful here,” he says, typing the message to his sister. The past abuse, so easily erased from one corner of the Internet, plagues Night every time he tries to hear, speak or sleep.