The fearless rescuers who save right whales from certain death 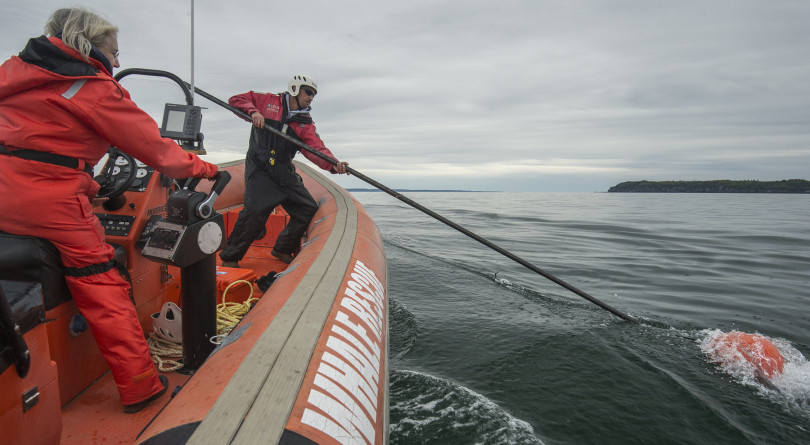 It was sunrise as Mackie Green and his team launched from the government wharf in Shippagan, N.B., to do what only a handful of people in this country are equipped and licensed to do.

Green was at the wheel of the Scamper, a 30-foot vessel that’s like a souped-up Zodiac. He swigged a Tim Hortons and bit into his breakfast sandwich as he and the crew of two (plus two apprentices) who make up the Campobello Whale Rescue Team zipped into the choppy Gulf of St. Lawrence. A gruelling day lay ahead—the kind of work that Green and his crew are used to as lifelong lobster fishermen. On this day, though, they were in pursuit of a different quarry: two sick North Atlantic right whales that were lethally entangled in fishing rope. It’s a job both pressure filled and treacherous.

A lot rode on their mission. As of late July, eight right whales had been found dead in the Gulf over the course of two weeks. In 2017, there were 12. (There were three mortalities in the United States in 2018, but none discovered in Canada.) Roughly 400 of the critically endangered animals are left in the world, so every loss is a step toward extinction.

As fishermen, Green and his crew straddle both worlds, and they know after dealing with the same issues years ago in the Bay of Fundy that the livelihoods of fellow fishermen on the Acadian Peninsula are also at stake. The crisis has mobilized scientists and government to put new measures in place to protect the whales—measures that affect fishing. Disentanglement is merely the first-line response, and it’s also the most dangerous.

It was here in the Gulf—a vast inland sea touching Quebec and all four Atlantic provinces—that Green watched his best friend and co-captain Joe Howlett die two summers ago while disentangling a right whale. This was Green’s first time back at work in these waters since the tragedy. “Joe and I had a pact when we started this in 2002 that if anything ever happened, one of us was going to keep it going,” he told Maclean’s. “I’m obligated now, I guess, but it’s something I want to do.”

At 10 a.m., a call crackled over the Scamper’s radio. One of several government surveillance planes tracking the right whales had spotted one of the two entangled animals. It’s whale No. 4423, a five-year-old male who spent last summer feeding on zooplankton in the Gulf.

His school-bus-size body was hog-tied with fishing rope, the lines trailing from both sides of his mouth and down his length, knotting around his tail. Whenever he pumped his flukes to swim, the rope sawed into the flesh around his mouth. He was in bad shape: his usually black skin was sickly pale, and he was covered in whale lice, parasitic crustaceans that feast on wounds.

Green punched in the coordinates. A geyser of water in the distance gave No. 4423 away. “Whale!” shouted one of the men on board, and the chase began. No. 4423 was about to encounter the worst moment of his life—a moment that might just save him.

The goal of whale rescuers is to get close enough to throw a grapple hook with a built-in blade onto the offending rope and then give it a pull. A buoy is attached, which, if the whale dives, will show where he’s going. More buoys can be hooked to the line to slow the whale.

To No. 4423, however, a boat is a predator. Humans have been his species’ enemy for centuries, from the days when commercial whalers threw harpoons, hunting them to the brink of extinction by the early 1890s. Today, entanglements and ship strikes are their greatest threat, and experts believe underwater noise is making them more vulnerable. Though whales are renowned for their ability to communicate and navigate using sound, research shows that low-frequency noise from large ships blocks the acoustic signals of right whales and causes them stress. In increasingly industrialized waters, this has created a quandary that political leaders, conservationists and fishermen are racing to resolve. In the meantime, the whales keep dying.

READ: Why are so many right whales dying in the Gulf of St. Lawrence?

When dealing with humans, though, No. 4423 showed he’s still crafty, dodging and swimming underneath the grapple. This game of chase went on for hours; the whale dove deep for five to 30 minutes at a time. The sun beat down and the men bashed around the boat as No. 4423 circled back for an umpteenth U-turn. There was rarely more than a split second to make the throw. Green recalls one of the Acadian crewmen belting out: “Tabarnac de baleine noire!”—a French curse against the whale.

By 3 p.m., after 19 attempts, they ﬁnally felt the strain on the line they’d been waiting for. “It’s just like hooking the big one,” Green laughed later. “There’s no feeling like it.” Sixty feet of line and a buoy were attached to the grapple line, but at this point there was no holding on. Like whalers of yore, the men have to be careful not to get caught in the fast unravelling rope that can pull them instantly to their death. The grapple line grew progressively more taut and then—pop—a piece of the ensnaring rope underneath the whale severed. The men hollered and high-fived.

More than 80 per cent of right whales have been entangled at some point in their lives. The majority escape on their own, as evidenced by the graffiti of scars on their bodies. But it takes a toll, leading to chronic pain, weakened immunity and impaired feeding. Sick, stressed and injured whales aren’t procreating.

The cut performed by Green and company freed up No. 4423 considerably, but as of this writing he still had knots around the base of his tail. Every time he stroked his flukes to swim, the rope abraded his flesh. The hope was that this cut would loosen up the other rope and he would work himself out over time.

This problem is new to the Gulf. Distressed and dead right whales used to show up in great numbers in the Bay of Fundy. But the government imposed permanent speed limits in the area, while international shipping lanes were moved to cut down on vessel strikes. However, the whales’ habitat is shifting due to climate change. Rising ocean temperatures off Maine have decreased their food availability, so they’ve shifted north into the Gulf of St. Lawrence, putting them at increased risk, according to research published in May in the journal Oceanography. 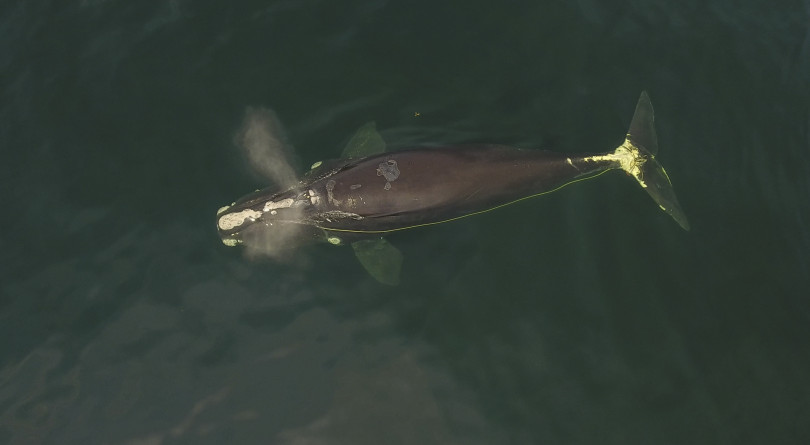 Late in the afternoon, the Campobello team got another call. Twelve nautical miles away was another entangled whale, No. 4440, also a five-year-old male. He had a severe tail injury. Fishing rope was embedded in his peduncle, the muscular area right above the tail, and the team needed to be extra careful. If they hooked the rope on his tail, he could bleed to death. If they added strain to slow him down like they usually do, they might rip his tail clean off. He was too sickly to put a satellite tag on.

After about 12 approaches, the team cut a piece of line coming out of the left side of the whale’s mouth. They could only hope he’d shake loose the rest.

In a statement announcing the seventh and eighth whale deaths, the federal government said it takes the issue “very seriously,” pointing to new protection measures: if even one right whale is spotted anywhere in the Gulf, the area will be shut down to fixed-gear fishing, such as the lucrative snow crab industry, worth an annual $78 million in New Brunswick. Crab traps are attached to long, vertical lines that can entangle the whales.

The feds are also monitoring the whales by aircraft and retrieving floating lost fishing gear from the ocean. Such reports have been mandatory in the Gulf since last year. Fishermen, meanwhile, have been testing ropeless gear and seeking a manufacturer to make rope with a lower breaking strength.

READ: Why animals should be given the same legal rights as humans

Still there are only two fully functional whale rescue teams on the East Coast: one based in Portugal Cove on Newfoundland’s Avalon Peninsula and the other on Campobello Island off southwestern New Brunswick. The Campobello team usually covers the Bay of Fundy and southwestern Nova Scotia, but has been making the six-hour highway drive to Shippagan on the edge of the Gulf of St. Lawrence because this is where the right whales have been showing up entangled.

The team is funded through federal government grants. They have a $1-million contract with Fisheries and Oceans Canada (DFO) for five years and recently acquired a new rescue vessel, truck and trailer. DFO representative Brett Gilchrist said a plan is underway to expand rescue operations in the Gulf: “We can’t always have the same organization operating in two places at once.”

Under dimming light, the Campobello Whale Rescue Team motored back to shore exhausted, wind-whipped and famished.

The government wharf in Shippagan bustles like a European town square at this time of year—people chat in parked cars, check on boats, mill about the wharf. But their attention shifted as Green and his team docked. Horns tooted and people cheered and waved. Everyone wanted to know how it went. “They’re extremely hard cases,” said Green. “But we’re hopeful that these cuts have at least helped.”

This article appears in print in the September 2019 issue of Maclean’s magazine with the headline, “A whale for the saving.” Subscribe to the monthly print magazine here.