Nova Scotia election puts Liberals and NDP to the test

Will the October provincial election predict things to come in 2015? 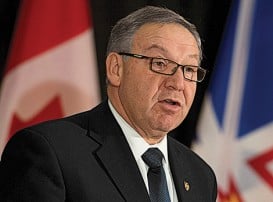 There’s been a tendency of late to view provincial elections as litmus tests for the next federal vote in 2015—and for good reason. With Nova Scotians going to the polls next month in what’s expected to come down to a battle between the incumbent NDP Premier and Stephen McNeil’s Liberals, their federal counterparts are hardly content to watch from the sidelines.

In a 30-second election ad for the Liberal Party of Nova Scotia, airing ahead of the Oct. 8 vote, federal Leader Justin Trudeau appears alongside McNeil, wading through a sea of supporters. The duo’s “bromance,” as it’s been called, is a strategy on the part of the provincial party to capitalize on Trudeau’s popularity. “We’ll be relying on Justin,” McNeil said at a rally earlier in the summer. At the end of August, Trudeau joined McNeil on campaign stops in Cape Breton and Halifax.

Not to be outdone, Opposition Leader Thomas Mulcair, struggling to be heard above the Trudeaupian-din, paid a visit to Halifax to champion Dexter’s cause. The NDP seized power in the province for the first time in 2009, and keeping it orange would aid the federal cause. “Any time Premier Dexter calls, I’ll be there for him,” Mulcair says. However, that’s a far less assertive tone than Mulcair took during British Columbia’s election in May, when he claimed a win by Adrian Dix would “translate into a victory for the first national NDP government in history in 2015.” Instead, Christy Clark’s upset over Dix was widely viewed as a loss for Mulcair.

But Lori Turnbull, a political science professor at Dalhousie University, says the same won’t be true if Dexter’s NDP don’t pull through. “Nova Scotia is a local-politics kind of place,” she says. “It’s more about Nova Scotia deciding whether this was a good experiment or a bad experiment.” Even so, they’ll be watching in Ottawa.