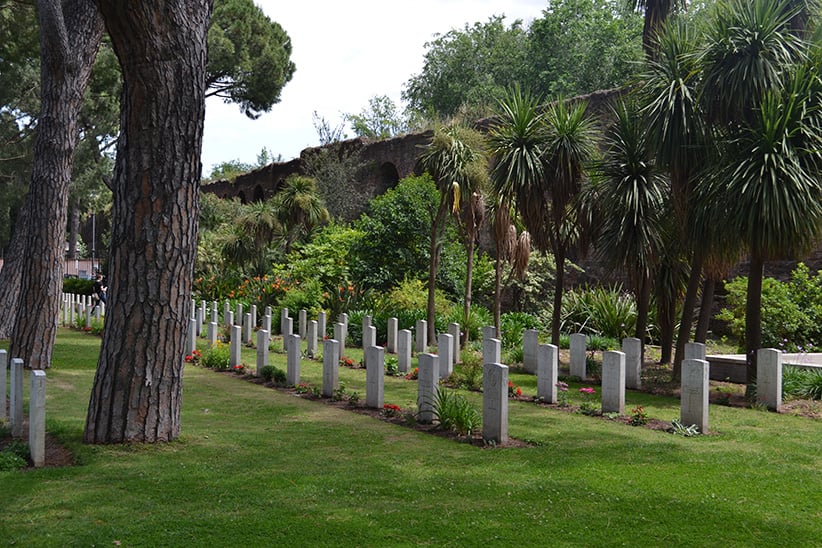 Graves are lined up at the Rome War Cemetery in Rome, Italy. This is where Eddie Namaypoke’s grave is. (Taylor Prestidge)

“Why the hell would I ever go to Italy?” my dad said.

That was his natural response when my sisters told him that we would be doing a family trip to visit the region my mother’s family had emigrated from, Calabria, in the south part of the Italian peninsula. Along with my mother and two older sisters and their families, he would be meeting up with me and my wife, Jenna, while we took a pause from our jobs and travelled the world for six months.

My father, Philip Prestidge, is 56 and a self-described “simple guy” of mixed heritage from various parts of the British Isles. When asked about his background, his standard reply is, “I’m from Hornby;” he’s actually from one concession road east of there, which is technically the hamlet of Whaley’s Corners, Ont.

It was a significant task to get him onto European soil, especially since he hadn’t ever travelled outside of North America in his six decades. However, he’s a guy who loves history and antiquities, and the trip would give him the opportunity to finally explore the Old World’s past. Prior to his departure, I made him several promises: the food would be unbelievable, you’re not going to get mugged, and we would visit some historically significant destinations and war memorials. It was only with that final promise that I noticed his attitude shift slightly. That or guilt over his entire family going without him.

I started twisting his arm about what he’d like to see. Pompeii? Cassino? Sicily? After doing his own research, he said there was one spot in particular he wanted to check out, one that was as unique and meaningful as any memorial in Italy—the Rome War Cemetery. This beautifully preserved cemetery lies within the Aurelian Walls of the ancient city. Only one block from the Pyramid of Caius Cestius, the cemetery lies at the heart of Roman life. Here one will find the graves of 426 British Commonwealth fighters, a reminder of the horrors of the Second World War. Brits, Australians, South Africans, New Zealanders, Indians and many more are buried here—a true showing of the Queen’s extensive realm. Also entombed there are 22 Canadians who gave their life for the greater good.

I had noticed before he went overseas that Dad, who works as a realtor, was doing extensive research to see if any relatives had been laid to rest in Rome after battling in the Italian theatre. He discovered that members of our family had fought for both the Royal Canadian and Royal British forces in South Africa, India and other parts of Europe, but he’d come up empty on the Second World War.

Still, he persevered. After looking into the records of our hometown of Milton, Ont., to see if any local soldiers were buried in Rome, he went online to find the names of fallen Canadian soldiers whose graves we’d find at the cemetery. One grabbed his attention: Pte. 2315, E. Namaypoke, The Lorne Scots (Peel, Dufferin and Halton Regiment), Royal Canadian Infantry Corps, Grave 1, F, 12. Strange, he thought: in the list of buried military personnel, this name stuck out as obviously not being of British or French stock. So he decided to do more research in the weeks leading to our departure.

The Lorne Scots Regimental Museum’s online archive lists Pte. Eddie Namaypoke as being from Manitou, within the 1850 Robinson-Superior Treaty. However, I’ve discovered there are varying accounts of where he grew up. According to the Aboriginal Veterans Honour List that can be found on a public-access computer utility out of British Columbia, Eddie was an Ojibwa from the Manitou Rapids Band of Rainy River First Nation. This version of Eddie’s upbringing seems most accurate, mainly because the “Manitou” that is listed is likely a reference to his band within the Rainy River First Nation, which is only 25 minutes west of Fort Frances, Ont. A visitor to the outskirts of Fort Frances between 1902 and 1974 would find the St. Margaret’s Indian Residential School; this is where Eddie spent most of his life prior to war.

Dad wanted to visit our new friend, Eddie. Being that we are from the Halton area and have family members who fought with the Lorne Scots, he felt a tie to this regiment. But much more than that, it was the fact that this brave young man—only 22 when he died on Dec. 13, 1944—deserved to be honoured all these years later. And in keeping with our times of reconciliation with Canadian aboriginals, my father felt that we should visit the grave of someone who had suffered the cultural genocide attributed to the residential-school system. A young man who gave up his life for Canada, and now lies for eternity in a cemetery very far away from Rainy River First Nation. A young man who would be 94 today, but didn’t live long enough to hear our government say sorry.

In May of this year, after three weeks of touring southern Italy, my parents, wife and I arrived in Rome, and my sisters and their families went their separate ways. Phil came prepared for our visit to the Rome War Cemetery, wearing his red Roots “Canada” T-shirt and a hat depicting a polar bear and emblazoned with “Manitoba” on the front. He had small Canadian flags to place at the graves of soldiers from our country, and a few special items just for Eddie.

We were the only people visiting the cemetery at the time, and the four of us found it to be both gloomy and magnificent. Walking through the archway rotunda at the front, we noted that the lawn was impeccably maintained, with the soldiers’ tombstones lined up in perfect symmetry. There was a haunting beauty in standing not only in the historical heart of the Roman Empire, with the ancient walls as a backdrop, but also knowing that lying before us were 22 of our countrymen who gave their lives so we could live in peace. Times like that make you wonder if that peace is taken for granted by our disenfranchised non-voters and laissez-faire generation of Pokémon Go users.

We walked along the rows beneath the hot, midday, Italian sun, to the sound of roosters crowing. At one point we passed the grave of Pte. Joseph Elphège Léon Benoit, of Valleyfield, Que., prompting Phil to quip, “Poor guy was probably a Habs fan, too.”

With Jenna and my mother Linda looking on, we finally located Pte. Namaypoke’s grave, and my father burst out, “Hey Eddie, we’re here to say thank you.” Then, while pulling out a Remembrance Day quarter with the poppy centred on the coin, he continued: “On behalf of all Canadians, we are so thankful for everything you’ve done to make us proud. I’m giving you this coin in honour of your valour.” Dad stuck the quarter at the back of his grave and planted a Canadian flag atop it. Then, behind the tombstone, he hung a beautiful dreamcatcher on the branch of the bird of paradise plant growing there. In the best way two white Canadians could, there in the heart of Italy, we tried our best to pay our respect to this aboriginal soldier.

As a tribute to his regiment, on a small portable stereo we played “The Campbells Are Coming,” a battle song used by the Lorne Scots, while reading Longfellow’s “The Song of Hiawatha,” and placing tobacco on his grave. Then, after reciting The Lord’s Prayer, my father declared, “We are honoured you chose the Lorne Scots regiment to be a member of and serve your country, and we just wanted to offer you this blessing.” Then my father, noting my moist eyes, said, “Emotional, eh?”

Both my father and I hope to God that Eddie’s memory is preserved by his family in the Rainy River First Nation, and both of us feel blessed to have had this experience. With the understanding that Eddie passed on generations ago, my father wrote this in the cemetery registry:

Reason for visiting: To visit Pte. Eddie Namaypoke, because it’s what he deserved.

Taylor Prestidge, 26, is the creative director at Sway Advertising in Hamilton, Ont. A grad of Mohawk College’s journalism program, he lives in the countryside near Rockwood, Ont., with his wife, Jenna; they are awaiting the arrival of their first child next year.