Suresh Singaratnam saw a nation of people desperate for a bit of spiritual uplift, and brought his musical vision to life 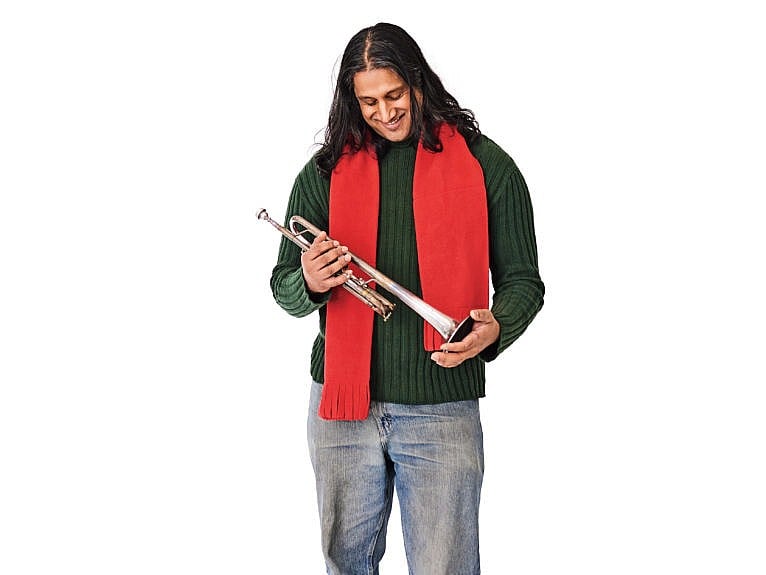 Suresh Singaratnam. This portrait was taken in accordance with public health recommendations, taking all necessary steps to protect participants from COVID-19. (Photograph by Dimitri Aspinall)

The song feels like the musical embodiment of a lacy frost embroidering itself across a windowpane: delicate, intricate and ephemeral. Strings, woodwinds, a twinkling chime join in first, then dozens of voices layer in bit by bit—together but not, like everything over the last year—as A Canadian Christmas swells toward its choruses.

Shortly before Christmas 2020, the video for the song appeared online, performed by an array of professional musicians and singers and ordinary Canadians assembled into a virtual choral performance. Suresh Singaratnam, a trumpet player who lives in Toronto, originally wrote the song in 2017, partly in response to the ugly intolerance burbling up in the wake of Donald Trump’s election; he intended the song to celebrate a quintessentially Canadian Christmas through the prism of the country’s diversity. But although it was written a few years before the pandemic wiped out normalcy, some of the lyrics seem strangely prescient: I contemplate the bittersweetness of these few short weeks of cheer, in a time so often wrought with fear / Despair returns when once again our world’s distress consumes my thoughts…

Singaratnam’s mission for the song was that it would find its way to every school and orchestra, so that Canadian kids would grow up singing it every December and internalize its message of inclusivity. He’d always wanted to record it on a larger scale, and suddenly the pandemic made that seem possible. “In 2020, there were all these virtual choir and orchestra things happening,” he says. “And I realized, I don’t have to worry about travelling and finding the money.”

Maybe, he thought, with everyone stuck at home, they would join him in making something beautiful. He started recruiting participants in September, aware that it would be tough for anyone to summon up Christmas spirit any earlier than that. “I was pretty confident it was going to be pretty special when it was done,” he says, “but it’s hard to explain that to people.”

He created “click tracks”—audio recordings of each instrumental or vocal part, set to a steady click so everyone sings or plays the same tempo and their voices and instruments can be seamlessly layered together later—and coached people to record their individual audio and video. He then edited it all together with the help of a professional engineer. The final product—which included dozens of amateurs singing with professional vocalists Laila Biali, Janna Baty and Joey Niceforo, along with musicians including Karen Donnelly, principal trumpet with the National Arts Centre Orchestra, and Steven Woomert, associate principal trumpet with the Toronto Symphony Orchestra—was highlighted on CBC’s The National over the holidays and passed around online by Canadians who really needed a dose of joy and hope as 2020 wound down.

“Culture is what makes us human beings,” Singaratnam says. “It’s the thing that is going to sustain us when we’re just restricted to the essentials and we’re isolated.”

With our lives still largely restricted to the essentials, it’s worth remembering that a little beautiful goes a long way.