The 'annoyances and insults' of blackface in Canada—in 1841

From the very beginning in the 1840s, black citizens in Toronto fought to shut down performances by blackface clowns, and their efforts are well documented 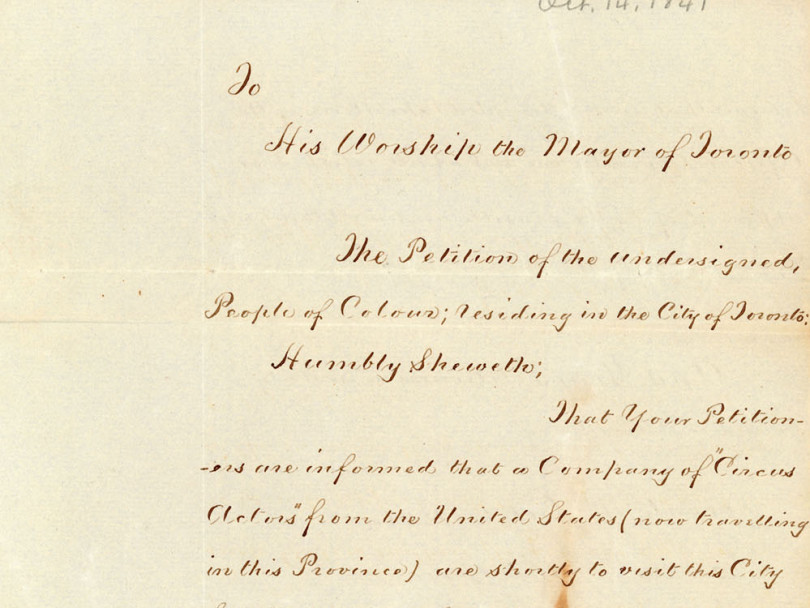 In the aftermath of news that Justin Trudeau repeatedly dressed up in blackface when he was a student and then, more shockingly, as a 29-year-old teacher, one of the blander bits of boilerplate response is that this might be a good time to learn some history.

Too often, that sounds suspiciously like a way of deflecting attention away from the disturbingly raw real-time political implications of those photos and videos of Trudeau, and into some safer zone like, say, cultural studies. Still, take the teaching-moment platitudes seriously, and you might find yourself in some interesting places.

Like, for example, a circus tent going up in Toronto around 1840. Among the performers: white clowns in blackface—a style of clowning pioneered with great success in the 1830s. Stephen Johnson, a professor of English and drama in the University of Toronto Mississauga, and editor of the 2013 book Burnt Cork: Origins and Traditions of Blackface Minstrelsy, marvels at the fact that we don’t have to guess at the offended reaction of Toronto’s black citizens back then; it’s clearly documented.

For four consecutive years, from 1840 to 1843, they petitioned city council not to allow the blackface clowns when that American circus put on their show in Toronto. “They became more extreme with each year,” Johnson says of the petitions. “By the end, they were saying that they were afraid that it was inciting physical violence against them and so on.”

READ MORE: The history of blackface that Justin Trudeau is contending with

Here’s some of the text of the remarkable document labeled “Item 785—Petition of various people of colour in Toronto—October 14, 1841,” which Johnson urged me to look at in the online digital collection of the City of Toronto Archives:

That your Petitioners are informed that a Company of “Circus Actors” from the United States (now travelling in this Province) are shortly to visit this City for the purpose of performing &c.

That Your Petitioners from the general and almost invariable practice of such Actors in their performances, have good reason to apprehend annoyances and insults, in the manner they endeavour to make the Coloured man appear ridiculous and contemptible in the eyes of their audience.

Your Petitioners would humbly pray that Your Worship would be pleased to prevent the occurrence of such annoyances and insults, as Your Petitioners believe that such attempted Exhibitions of the African Character are not at all relished or approved of by the sensible and well thinking Inhabitants of this Community.

“The survival of these petitions is extraordinary,” Johnson says. “Reading them is heartbreaking.” He points out that it was only in the years and decades after those circus clowns showed up in Toronto that the full-blown minstrel shows, which came to be more often associated with the racist blackface tradition, were established. “And yet right from the beginning,” he notes, “people tried to protest this.”

From the mid-19th century on, well into the 20th-century, the blackface minstrel style became commonplace. “Finally, it becomes normalized,” Johnson says, adding that he doubts many Canadians today realize “how frustratingly ubiquitous blackface minstrelsy was.”

And not just in the entertainment business. “It was everyplace,” he says. “Sunday schools. Service clubs. There was an entire industry of amateur stuff you could order from a company—everything you need to put on a minstrel show.” The racism codified in a particular portrayal of the Southern plantation slave blurs over time, Johnson says, into all sorts of other blackface costumes.

Johnson is still researching those petitions from the 1840s and the circumstances surrounding them. He suspects that along with black citizens some white abolitionists were involved. For the record, the petitions didn’t work. City council let the show go on.