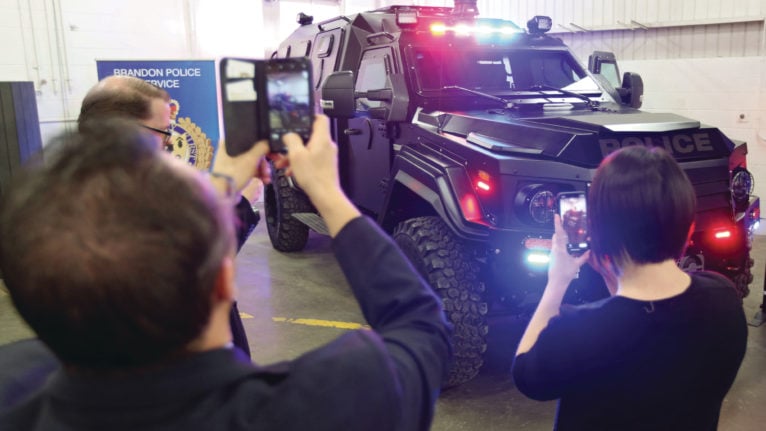 On Jan. 16, Brandon, Man., police rolled into a downtown neighbourhood with a weapons warrant, and a vehicle fitted for urban warfare.

By about 3 p.m. officers had shut down the 300 block of 15th Street to deploy the Tactical Response Unit, a specialized team of armed and armoured operators used for high-risk responses. That’s where Brandon Police Service first dispatched its newly acquired armoured rescue vehicle (ARV)—a militarized machine equipped with ballistic armour, gun slots and a rotating turret up top—and when Liam Pattison, a local photographer, arrived on scene to capture the action.

Behind a barricade at the north end of the block, the 22-year-old found the ARV parked on the front lawn of a home, and heard a voice blaring from the vehicle’s speaker system ordering occupants inside to surrender. About an hour later, police had eight suspects in custody, some with sundry edged and blunt weapons in their possession. A search of the house turned up a .22-calibre semi-automatic rifle, bear mace and a BB gun.

Pattison, who’s been snapping local emergency scenes for the better part of a decade, wasn’t alarmed when he saw the vehicle in action. It gave him peace of mind. “I’d rather have this vehicle and not need it, than need it and not have it,” he says. But not everyone shares his sense of approval. The acquisition left some in Brandon, a farming and university city of about 60,000, wondering what imminent threat called for such a show of force. “It makes it seem like they’re ready to go to war with the public,” says Alaynia, an organizer with a local Black Lives Matter group, who asked that her last name be withheld out of concern her activism might make her a target of harassment.

Canadians have long maintained a high opinion of law enforcement. A Leger survey in June found that more than 70 per cent of respondents trust and are satisfied with their local police services. But the reputation of those forces has been on a downward trend, falling by 11 points since 2018. The survey was completed about two weeks after Minneapolis police arrested George Floyd, a 46-year-old Black man, on May 25, and allegedly murdered him on a city street.

Floyd’s death sparked protests in Minneapolis, where widespread public outrage resulted in a wholesale revision of the relationship between police and the people they’re sworn to protect. The movement quickly spread throughout the U.S., into Canada and around the world. Protests in this country called on governments to root out systemic racism pervading the criminal justice system, and to defund police. A key component of their complaint: growing militarization of forces, they say, puts a hostile face on police and reflects an antagonistic attitude among officers toward the civilian public.

Kevin Walby, a criminologist at the University of Winnipeg, has been tracking one rapidly expanding front of police militarization in Canada—the deployment of Special Weapons and Tactics (SWAT) teams by several police forces across the country. Since the 1980s, he says, when tactical units in Canada were deployed at an average rate of 60 times per year, that number has exploded to an average of 1,300 deployments per unit in 2016—a 2,100 per cent increase in less than 40 years.

OPINION: “We must defund the police. It is the only option.”

Part of the reason for the rise of SWAT teams in Canada, he adds, is a lack of policies or laws that limit their use. A 2010 Supreme Court of Canada ruling found that police must be allowed “latitude” in their operations to ensure the safety of officers. In other words, there’s nothing limiting tactical units to situations that demand their training and equipment, such as serving high-risk warrants or responding to hostage scenarios. “Now they’re being used for serving all kinds of warrants,” Walby says. “They’re also being used for mental health checks. They’re being used in traffic, and community policing.”

Of the 10 police forces studied, Winnipeg had the highest rate in Canada, jumping from 484 deployments in 2013 to more than 3,300 three years later. According to Const. Rob Carver, a spokesperson for the service, the trend is likely to continue, and it’s part of a plan. It’s not that SWAT responses are necessarily in greater demand. Rather, the service is intentionally dispatching members of its Tactical Support Team (TST) as a safety precaution on all warrants. “When the enhanced training and weaponry of TST is deployed,” Carver says, “the risk is reduced.”

Another part of the plan is keeping these elite units connected to the community by dispatching them on routine police calls, such as traffic collisions, rather than reserving them for tactical missions. “This isn’t a SWAT deployment where our armoured rescue vehicle is out, and guys are hanging out the side of the vehicle with ballistic helmets,” he says. Besides tactical training, he adds, the only ostensible difference between TST units and standard officers on these calls are that the former wear grey uniforms, and carry a sidearm with a slightly longer barrel. Carver says this system serves as a reminder to tactical members that “their job is to function as police officers—first and foremost—within a community.”

Given the heightened attention to police violence in recent years, and the prevalence of systemic racism, creeping militarization of Canadian police services presents a concern when considering the use of appropriate force. Carver admits that risks associated with police using military equipment and methods are obvious, not just to Winnipeggers, but to all Canadians concerned about the role of police in society: “I think we will have to work harder to help people understand why we would choose to do that. We don’t do it lightly.” 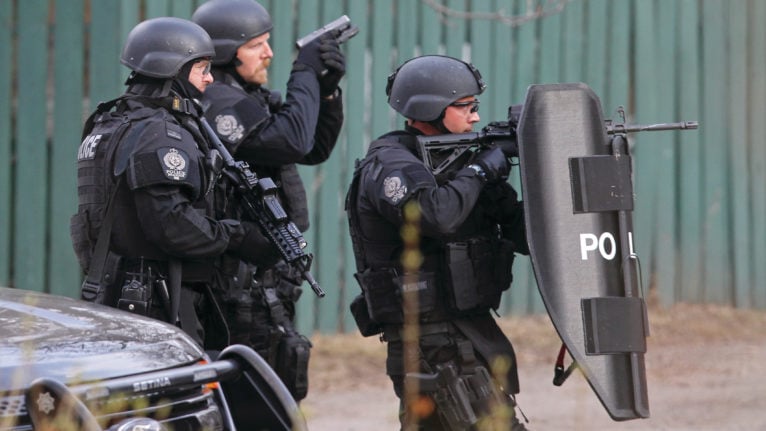 Not all of the cities studied between 2007 and 2016 saw an increase in annual tactical deployments. Calgary saw a marked drop in that time frame, from 1,556 deployments to 619. Ottawa had fewer than other jurisdictions, fluctuating between 100 to 200 per year. Vancouver, too, was not far behind, hovering between 200 to 300 deployments.

Back in Brandon, police use the Tactical Response Unit—its SWAT equivalent—at a much lower rate, but deployments are trending upward. When the ARV was unveiled in December 2019, Chief Wayne Balcaen recorded six tactical deployments that year—a threefold increase from the historical average. In 2018, when the force seized more than 200 firearms, the tactical unit was deployed 14 times.

For Balcaen, the vehicle is a necessary addition, bringing the force in line with other services from Victoria to St. John’s. It shields officers from gunfire, and allows them to safely approach, de-escalate and retreat from potentially deadly scenarios. “We have to look at the fact that these also save lives,” he says.

Not all Brandonites see it that way. Critics like Alaynia, the Black Lives Matter organizer and a 20-year-old student at Assiniboine Community College, see it as an implied threat, especially with the names of the Black victims of police violence resonating in their minds, listed on signs and chanted at rallies protesting police brutality. A Black woman herself, Alaynia has never suffered violence or discrimination at the hands of local police (she goes out of her way to avoid confrontation), but she knows racism is a systemic problem, not anecdotal. The trend toward militarization amplifies a pre-existing fear of police, she says, and “of becoming another name on those signs.”

Manitoba’s government provided nearly $400,000 toward the cost of the vehicle through a federal program that reallocates the forfeited funds of federally prosecuted crimes. Although the purchase came before the protests, Alaynia believes the funding would have better served the city if it had been channelled toward enhancing de-escalation training and social programs to proactively stem crime.

That’s the tack Halifax took in June, when city council voted to rescind the purchase of a similar armoured vehicle, originally slated to arrive this spring. At the request of Halifax Regional Police, the city earmarked about $300,000 for the truck in 2019, when Councillor Shawn Cleary says he and a handful of other councillors tried, unsuccessfully, to have it removed. “This was the kind of thing that could be used in a very aggressive way, and a very offensive way against our population,” Cleary adds. The same year, a report commissioned by the Nova Scotia Human Rights Commission found that Black people in Halifax were six times more likely to be stopped by police in street checks—a practice that’s since ceased in the province.

With the “sea change” prompted by Floyd’s death, and the COVID-19 pandemic delaying the delivery date to 2021, Cleary returned to the issue, tabling a motion to shift funds for the vehicle toward initiatives to combat anti-Black racism. All but one councillor voted in favour. The decision is particularly striking given that Nova Scotia was the location of the deadliest mass shooting in Canadian history, after a rampaging gunman murdered 22 people on a killing spree in April, which began in Portapique, N.S., and ended in Enfield, a 30-minute drive north of Halifax.

Cleary doesn’t believe the motion will adversely affect police safety, since the RCMP has its own armoured vehicle stationed within the Halifax Regional Municipality. In a province with about one million people, roughly half of whom reside in and around Halifax, the councillor questioned how many armoured rescue vehicles the city, or even the province, needs. And while he doesn’t expect to change the tide of police militarization in Canada, he believes the council’s reversal will alter its course in Halifax. “I’m hopeful that we can demilitarize to the extent necessary and reasonable,” he says. “I’m hopeful that we can actually turn the ship.”

This article appears in print in the August 2020 issue of Maclean’s magazine with the headline, “The armour-plated blue line.” Subscribe to the monthly print magazine here.