The military could fix the nursing home tragedy. 'We are soldiers. We can do anything.'

Stephen Maher: The former Canadian Forces Army Surgeon says the military has the skills and experience to help, right now. What are politicians waiting for? 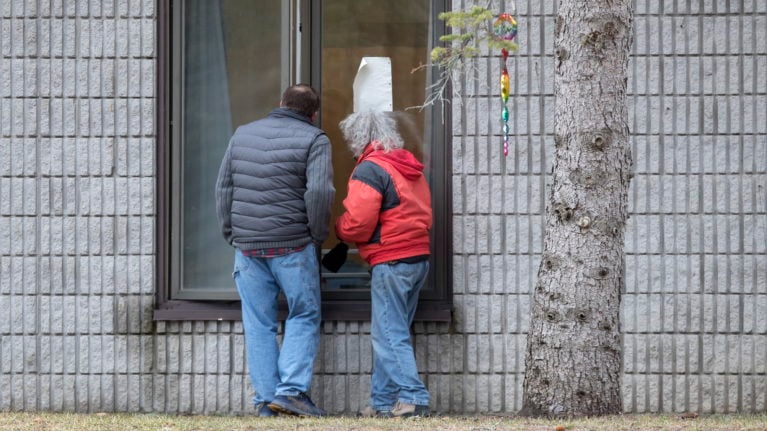 Visitors talk through a window at Pinecrest Nursing Home in Bobcaygeon, Ont., where there has been a deadly COVID-19 outbreak, on March 30, 2020 (CP/Fred Thornhill)

The Canadian Forces could provide emergency aid to long-term care homes struggling to cope with a wave of deaths from COVID-19, but only if the politicians act quickly to knock down legal and jurisdictional hurdles, says the former Canadian Forces Army Surgeon.

Col. Annie Bouchard, who retired in 2019 and is now working as a civilian medical adviser to NATO in Luxembourg, saved lives in uniform in Haiti and Afghanistan and was the director of Health Services Operations for the Canadian Forces for three years.

She has been following the disturbing news from long-term care homes in Quebec and Ontario, where hundreds of residents have died, thousands have been infected, leaving overwhelmed staff struggling to maintain care quality.

The provincial governments are responding with emergency plans, diverting resources from the emergency medical system, which has so far not been overwhelmed by COVID-19.

Col. Bouchard says there are about 2,500 deployable medical personnel in the Canadian Forces who could help overwhelmed care homes. “You have those nurses that are incredibly competent,” she said. “You have a bunch of doctors who are as competent as a lot of doctors who work in offices. The physicians in the Canadian Forces are top notch. You also have medical technicians, medics, you probably saw them in Haiti. The problem is that they don’t have an equivalent in the Quebec or Ontario medical system, but they are a very good bunch. The problem is that those professionals are unlicensed health care providers.”

Because health care is a provincial responsibility under the Constitution, doctors cannot practise across provincial lines. The United States has waived that rule for the duration of the emergency, but the same thing hasn’t happened in Canada.

DND regulations allow for the Forces personnel to care for civilians in an emergency, and the Emergencies Act would allow for Ottawa to authorize personnel to provide essential services, but after resistance from the provinces, Ottawa has held off on declaring an emergency.

The Forces would need clarity before they could act,  said Col. Bouchard.

“We have to follow the regulations that are in place,” she said. “I’m not saying it is impossible to do, but a lot of people, I don’t know who exactly, would have to meet and decide that a doctor that is licensed in B.C., and that doctor who has a Nova Scotia licence, yes they can practice in the Quebec province. And that is not easy to do.”

The office of the Defence Minister and public affairs department of DND did not immediately respond to requests for information on Thursday about whether officials are trying to get the necessary authorizations.

“You cannot just ask the Canadian Forces. It has to go through the federal government and then back down. In a crisis, though, this can take less than 24 hours. We can be quite responsive. When we sent the DART (Disaster Assistance Response Team) to Haiti, in 36 hours we were on the ground in Port-Au-Prince. It can be pretty efficient.”

In Canada, it would be much easier.

“Logistically, there’s no challenge,” she said. “You’re moving a few people, here and there. You place them in a hotel or you put up a tent. And those people don’t need to be paid much more than they are paid on a regular basis. This is a ridiculous amount of money compared to the cost of people dying, the emotional cost, and the family anxiety that this creates. You know people are dying alone right now.”

The first step, she said, is the provincial governments admitting they need help.

“They will have to admit they are overwhelmed. They don’t like to do that. That’s how the policy is written. If the province or the civilian authority cannot handle the situation by themselves, then they are allowed to ask for federal help, so that the Canadian Forces can get involved. Sometimes in floods, or the B.C. wildfires, we say ‘hey we’re ready’, but it takes so much time for the request to come because they want to make sure they have done everything in their power to solve the issue before they ask. When people are dying maybe it’s the time to admit that you don’t have enough resources.”

If the barrier is jurisdictional, the solution is political.

If they make the call, she said, the Canadian Forces will be ready to meet the challenge, effectively and safely.

“When we deployed to Sierra Leone, during the Ebola crisis in 2014, not one of us got infected,” she said. “Not one of those folks got infected with the virus. So yes we can use PPE in a very efficient way. We are soldiers. We can do anything.”