Before the Kinder Morgan expansion got approved, the New Democrats of Alberta and B.C. were one big, happy family. Now they're like oil and water. 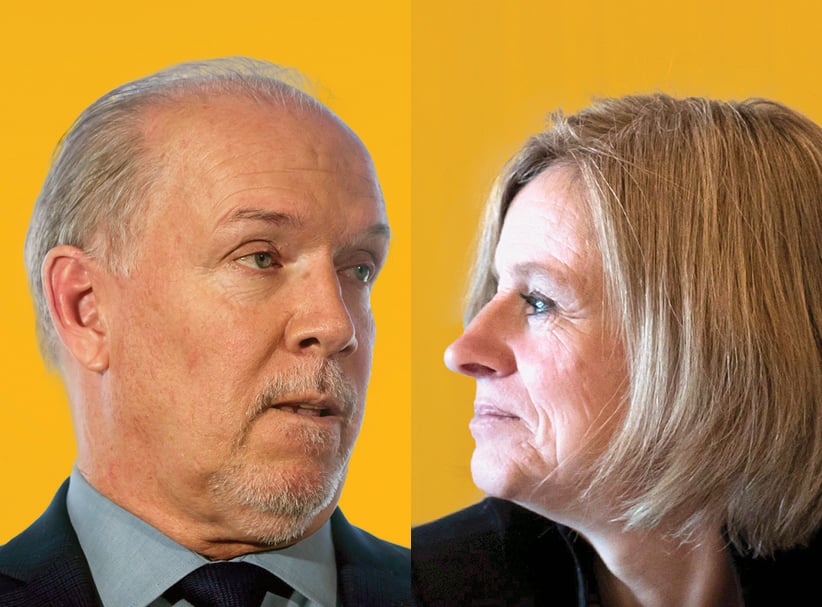 When there’s an election somewhere in the land, it’s as if an orange-hued bat signal appears in Canadian skies. Or, as some New Democrats refer to it, the “casting call”—a plea for the most skilled, eager and travel-ready organizers from provincial and federal NDP wings to spend a few weeks managing a target riding campaign, or assisting the central war room.

Liberal and Conservative campaigners routinely do the have-parachute-will-travel act as well, but no partisan tribe marshals the troops like the NDP, a crew tightly knit by shared belief and a sense of political mission. The parties’ very organizational structure helps keep its members under the same orange tent: buying your province’s party card automatically enrolls you in the federal branch, and vice versa.

But when the summons blares next month from British Columbia, where John Horgan’s NDP hopes to deny the Liberals a fifth consecutive term, the westbound fly-in crew won’t include helpers from Alberta, the current power base for Canada’s New Democrats. In a rare move for a party whose activists call each other brothers and sisters, Notley government staff are all but barred from going to help the B.C. NDP campaign.

The freeze-out has taken hold despite the major airlift of talent that landed following Notley’s own surprise election win in 2015: top aides and left-leaning strategists from throughout Canada, especially from Victoria, arrived to help the rookie premier get her government up and running. And it can all be traced to an issue that in the past has threatened to drive a wedge between the country’s westernmost provinces, much less one political party: petroleum pipelines.

No subject can divide New Democrats quite like it. In the first federal NDP leadership debate March 12, it was a rare issue that actually stoked, well, debate among the contenders. The disparate views of the Notley NDP and Horgan NDP on the Trans Mountain pipeline will keep Alberta staff on their side of the Rockies this spring. For the Notley government, federal approval of Kinder Morgan’s project marks the biggest victory in a challenging term. Its economic benefits, the premier argues, help justify the new carbon tax and climate change policies. To Horgan, the increased oil tanker traffic around Vancouver and the Salish Sea are an unacceptable liability. Both argue they’re advancing their own province’s best interests. To one NDP leader, the pipeline represents good-paying jobs; to the other, looming environmental catastrophe. 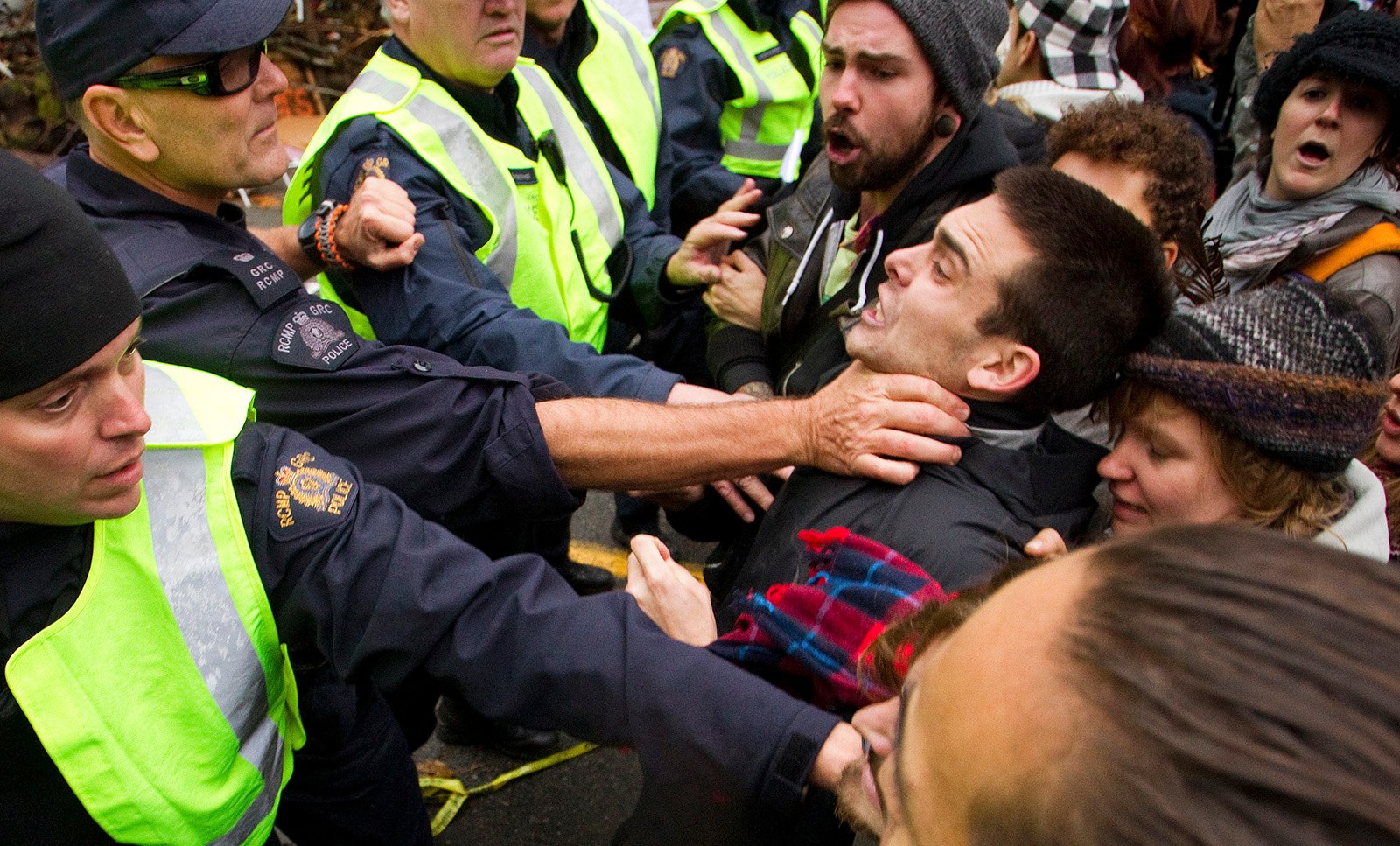 After Horgan’s position became firm, Notley’s office laid out the direction in a meeting with the government’s political staff late last year: if anyone wanted to help the B.C. NDP campaign—even on unpaid leave or personal vacation time—they should first leave their Alberta jobs altogether.

“If you work for the Alberta government, you work for the Alberta government and that means you support the policies that we put in place to create jobs in Alberta, and that work includes advocating for Kinder Morgan,” says Notley spokeswoman Cheryl Oates. “We’re just so unaligned on this fundamental idea that it doesn’t make sense that our staff can go and work against something our staff is so focused on.”

The optics of staff flying away to help elect an anti-pipeline premier would have been excruciating for Notley, especially given the conservative opposition’s love of hammering at any aides’ or advisors’ deep-green remarks, past or present. The near-edict carried some risks, as her staff is well-stocked with former B.C. party operatives—from the premier’s (and previously Horgan’s) chief of staff John Heaney down to several senior ministerial aides. Chalk it up to loyalty to the boss, or a preference for staying employed with a government salary, but only a couple political staff left Edmonton and returned to B.C.

The most senior of those is Matt Hannah, a B.C. party organizer who helped Notley with the 2015 transition to power, and stayed on in various roles, lastly as a minister’s chief of staff. He declined an interview, but added: “I know Christy has some former (Stephen) Harper staff working with her that could make for an interesting story.”

The B.C. Liberals are indeed the most big-C Conservative of the country’s big-L parties; Clark has brought on the former prime minister’s aides to be her past chief of staff and communications director (though her campaign team and staff also include Ontario Liberal alumni). Several federal and Alberta Tory aides moved west for jobs once their respective governments lost, too. That underlines another reason Notley’s political staff are staying put: they’re busy at work this spring. This rationale did not, however, prevent her team from loaning a few aides to the 2015 NDP federal campaign, with its less-defined position on export pipelines.

The Horgan camp isn’t howling over the denial of help from Canada’s lone NDP administration—at least not publicly. Horgan “respects Rachel a great deal,” says B.C. party deputy director Glen Sanford. “It’s okay for friends to disagree. And on this issue they disagree. They could work together on a variety of issues.” The campaign will have imports from other provinces, including Ontario New Democrats training for their election next year, as well as Bob Dewar, former chief of staff to Manitoba premier Gary Doer. In stark contrast to the 2013 campaign, which was headed by three Ontarians—Anne McGrath, Brian Topp and Brad Lavigne—the NDP war room will be almost exclusively led by British Columbians, with the exception of Dewar, who has been living in the province since last March, working, most recently, as Horgan’s chief of staff (he left that role earlier this week, to focus on the coming campaign).

Key figures also include party director Raj Sihota, the first woman of South Asian descent to hold the top position at a major party in the province, Mira Oreck, chair of party’s election planning committee. Oreck, a Broadbent Institute director, has also worked on the campaigns of Vancouver Mayor Gregor Robertson, and former U.S. president Barack Obama, and ran unsuccessfully for the federal NDP in Vancouver.

Beyond key figures, “most of our campaign staff are from B.C.,” said Sanford, side-stepping a question of whether this was a rebuke of the outsiders who guided the 2013 campaign. This isn’t a luxury the Alberta NDP had, with its traditionally small base of social democrats in a province long friendly to conservatives; in 2015, they brought on Topp and McGrath, while B.C. vet Gerry Scott was manager.

The Trans Mountain pipeline proved a turning point in the NDP’s 2013 campaign, when then-leader Adrian Dix managed to turn a large polling lead throughout the campaign into defeat. Navigating carefully the opinion split among voters and within the NDP, Dix initially said he’d withhold judgment on the pipeline question until Kinder Morgan went through the federal regulatory process. Then, midway through the pre-writ period, he surprised even his aides by abruptly declaring his opposition to the pipeline. This allowed Clark Liberals to cast Dix as a flip-flopper, and his late play to environmentalist voters failed.

Among the war-roomers for Dix was Shannon Phillips, then an Alberta Federation of Labour analyst and now the province’s environment minister. She watched with frustration as the campaign failed to craft a cohesive argument for its pipeline opposition. “We cannot make an environmental argument without also making a jobs argument, and in particular in B.C. we failed to provide a larger vision for how we might provide jobs,” she told the Globe and Mail in 2013. Now she’s in a government where oil jobs get inextricably linked to pipelines, while the B.C. party seeks election arguing the province can develop jobs with its own natural resources, like its forests.

Such a sharp policy split within the NDP family is rare. It’s arguably the biggest since the 1980 and constitutional drafting disagreements between then-leader Ed Broadbent and a western faction led by Saskatchewan premier Allan Blakeney, says Lavigne, the party’s former national director. He doesn’t expect this to have long-term impacts when the Alberta NDP need cross-Canada help seeking reelection in 2019. “No one political party is of one mind on any given issue,” he says. “For volunteers within the new democratic, the most important thing is to help New Democrats win office everywhere.”

Still, a win for John Horgan could give Notley a headache on multiple levels. It would place give B.C. a premier committed to thwarting Alberta’s most coveted piece of private infrastructure; it would give rise to Alberta opposition protests that Notley can’t help buy “social licence” with her ideological brethren; and it could trigger a brain drain to fill a new government’s offices. The B.C. expats and other staffers might prefer the thought of life in Victoria, where in March they measure inches of fallen cherry blossoms rather than snow, and where New Democrat stances tend to get much friendlier reception than in Alberta. “If they form a government, I don’t know what would happen,” says one of Alberta’s come-from-away aides, on the condition she not be named.

Lavigne doubts that would pose much of a problem, since B.C. is a net exporter of NDP talent (it’s the province where he got his backroom start). This move from Alberta to B.C., for the campaign or afterwards, would require a sharp U-turn in advocacy, a whole new batch of arguments to loyally retweet. But it wouldn’t be so different from the one many made in the first place, when they followed the lure of working for politicians in power.