It became the Canadian angle to a violent and deadly white nationalist protest. Is this the alt-right website's breaking point? 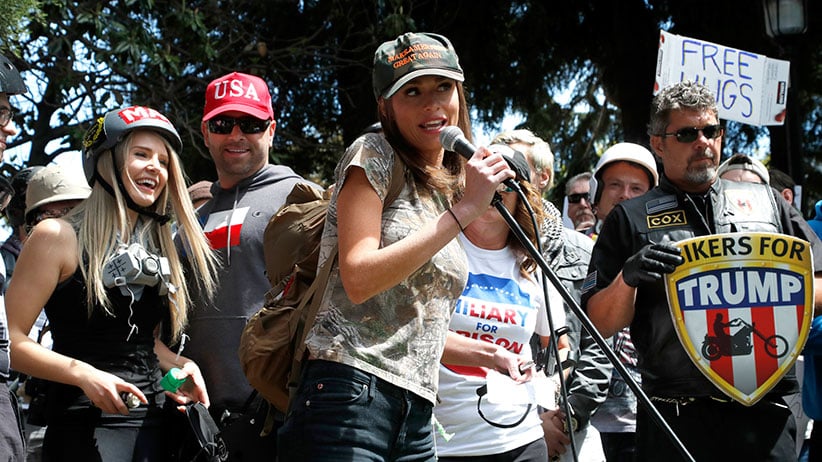 Rebel Media’s sympathetic coverage of the white nationalist protest in Charlottesville, Va.—correspondent Faith Goldy repeatedly calls marchers on that side “patriots,” as many of them called themselves—was finally what pushed Rebel co-founder Brian Lilley to break with the activism-media outlet.

The Rebel had become increasingly toxic in mainstream Canadian discourse, and the target of a campaign for companies to pull ads from its website. The latest bit of chumminess with overt racists at a violent and deadly rally also prompted Conservatives to urge colleagues disavow them, from MP Michael Chong to Alberta conservative leadership candidate Doug Schweitzer.

But the attrition from within was something different; after Lilley, occasional contributors Barbara Kay and John Robson bolted Tuesday.

Sure, Lilley hewed to the website’s uniformly anti-Trudeau and pro-Trump lines, and repeatedly slurred asylum seekers as “fake refugees.” But Lilley was always a sort of straight-man in the radically askew operation; his commentaries sounded less like rants than most of his fellow rebels, and he steered clear of the rallies and activist stunts that had come to define much of what Ezra Levant’s Rebel does.

“What The Rebel suffers from is a lack of editorial and behavioural judgment that left unchecked will destroy it and those around it. For that reason, I am leaving,” Lilley wrote in a Facebook post, in which he acknowledged this decision was long in the making.

“As a serious journalist with nearly 20 years experience at the highest levels in this country, and abroad, I cannot be a part of this.”

His diagnosis of the problem is one commonly shared by conservatives when they think about The Rebel. The last sentence in that quote, however, is key–Lilley has worked as a professional journalist, a career radio reporter before Sun News Network scooped him up for hosting duties. When Sun shuttered in 2015, he joined Levant to try liberating themselves from unemployment with an online media startup.

The remaining Rebel crew have deeper roots in politics and activism. There’s Levant himself, an old Reform party aide who then drifted into commentary journalism; Alberta bureau chief Sheila Gunn Reid, formerly a stay-at-home mom with a penchant for tweeting invective at liberals; Gavin McInnes, who co-founded Vice magazine but more lately has launched the thuggish Proud Boys group; an undergraduate student named Jay Fayza whom Levant says he hired for his contrarianism at a university campus rally; alumnus Jack Posobiec was a conspiracy-minded player with Citizens for Trump; and new recruit Laura Loomer, who was with an undercover ambush video outfit. After joining Levant’s group, she rushed onto a New York stage in June to disrupt a Julius Caesar performance featuring an assassinated Trump-like protagonist. Lloyd Grove, writing about Loomer for the Daily Beast, wisely didn’t call Loomer a reporter but rather a “Rebel TV operative.”

There was a time, early last year, when Alberta Premier Rachel Notley’s office barred Gunn Reid from covering the Alberta legislature and journalists gulped and defended The Rebel’s media access. It’s much harder to see that happening 18 months later, after any number of episodes that may have prompted Brian Lilley, as a professional journalist, to leave and warn about the dark path Levant’s organization has taken to draw clicks, eyeballs and crowd-funding. Maybe it could have been the anti-Notley rally dotted with “lock her up” chants from the crowd; coverage of the Quebec City mosque shooting that focused on doubting that the white male charged with murder might have done it; a Toronto rally against a House of Commons motion denouncing Islamophobia doubled as a pro-Islamophobia rally; Rebel commentators appearing on conspiracy-monger Alex Jones’ Infowars; or McInnes’ drunken rant from Israel originally titled “10 things I hate about Jews.”

This is a gob-smacking inventory. The bridge too far for Lilley was his organization becoming the Canadian angle to a violent white nationalist protest, even as less than half of The Rebel’s audience actually resides in Canada. The ensuing international coverage that casually called The Rebel an alt-right website finally prompted Levant himself to say: hey, we’re not cool with that stuff, and we are not racist and not alt-right.

“Simply covering controversial figures doesn’t mean we agree with those controversial figures,” he stated. This might hold water if Goldy was an impassive observer, not a commentator who often raises the alarm about demographic change bringing “white genocide,” and openly advocating a new “crusade” against Islam. Talking to a video live-stream at the Charlottesville counter-protest, an activist scolded her as alt-right and she sarcastically replied: “I’m here to learn about multiculturalism. And I’m here to learn about how diverse groups lead to very high-trust societies.” She said this right before her video feed caught a motorist deliberately ramming into several people. Goldy spoke generously of the alt-right’ s Charlottesville Statement, with robust and “well-thought ideas” touching on matters like “race and the JQ.” You get a sense of the discourse community she’s in when she doesn’t feel the need to explain that JQ stands for the Jewish Question.

David Duke, the former KKK leader not known for tweeting articles he dislikes without comment, tweeted Goldy’s take on Charlottesville without comment. Why? In that video, Goldy declared the violent confrontation between anti-fascists, Black Lives Matters and neo-Nazis along with their  fellow travellers was part of an “escalating civil war.” (Levant, to his credit, noted it was a mere 500 people on the white nationalist side.) On Israel’s Channel 2, it was compared to 1930s Germany and called “Weimerica. America’s become the new Berlin and some people want to keep it that way.” In this analogy, the 2017 white nationalist side would be the actual Nazis.

Spencer has been interviewed on the Rebel before–that itself is not a crime, as many organizations have profiled the believer in racial superiority, but McInnes gave a chummy interview, and cheekily asked Spencer’s view on the fact Levant is Jewish. “He’s a neo-conservative, as I understand,” Spencer replied. “The fact he has you on, you’re kind of pushing things in our direction in your own way. The fact I’m on here and we can talk respectfully, that’s great.” Spencer also authored that Charlottesville manifesto about which Goldy spoke reverentially. It calls ethnically defined states “legitimate and necessary.” Its point Number 2, about Jews, stresses them as distinct from white Europeans and calls the term “Judeo-Christian values” a distortion of reality.

Lilley, having watched a steady spiralling downwards of Rebel into conspiracy and white identity politics, finally found his breaking point. Levant will defend himself as not racist, but inevitably some people will see continued caterwauls about white oppression, relentless bashing of Muslims and refugees and Black Lives Matters as rather racist.

Many viewers and supporters have stuck in for the Notley- and Trudeau-bashing and put up or ignored with the stoking of cultural fires, but that must keep getting harder, as inevitably there will be more disturbing episodes to come; while other Rebel supporters will stick around specifically because this is a safe harbour for one side of what Goldy terms a civil war. Ezra Levant is seldom one to back down, and his organization’s descent into darkness seems to be getting harder and harder to reverse even if he tried.